The average selling price (ASP) of MEMS product declined with 7% each year from 2011 to 2014. The trend is expected to be same during the forecast period. Despite the high propriety learning curves of the integrated device manufacturers (IDMs), the MEMS companies witnessing strong growth are fabless. Moreover, with benefits such as significant reduction in capital requirement, the new entrants in the MEMS industry are expected to be fabless at least for next four to five years. The independent MEMS foundries reduces the time and cost of MEMS by offering standardized wafer manufacturing and production benefits, such as economy of scale, this is expected to drive the growth of MEMS foundry outsourcing market during the forecast period. 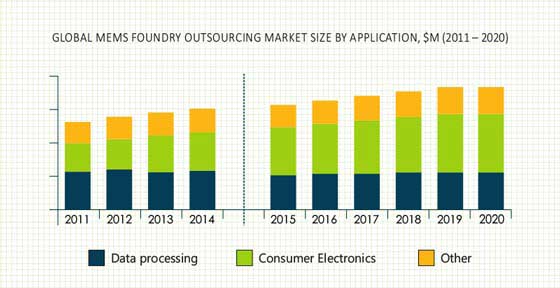 In 2014, the global MEMS market crossed $13 billion revenue, and accounted for the growth of about 10% from 2011 to 2014. However, the unit shipments of the MEMS are growing at much faster rate compared to the revenue, owing to the significant fall in average selling price (ASP) of MEMS during the past few years. Although, the growth of 10% looks lucrative but the major players are battling hard to generate profits. STMicroelectronics produce MEMS in very high volume. However, the company is struggling hard to control the decreased price of its own MEMS product.

The pure-play MEMS foundries witnessed considerable growth over the past few years; however the major part of MEMS foundry outsourcing market is still captured by IDMs. The continuous decline in MEMS ASPs has also forced many IDMs to enter in the market of MEMS foundry outsourcing. Recently, Bosch started renting its 8” fab to the fabless MEMS manufacturers. The IDMs have competitive advantage over the fabless and fablight MEMS players, as they have high proprietary learning curve in MEMS design. Moreover, IDMs also benefit from the economy of scale particularly from the ASIC MEMS.

Taiwan Semiconductor Manufacturing Company accounted for the largest share in MEMS foundry outsourcing market in 2014 among pure-play MEMS foundry vendors. TSMC fabricates a wide range of MEMS product including 3-axis gyroscopes, MEMS microphones, accelerometers, pressure sensors, inkjet print heads, and lab-on-chip. One of the prime factors behind the staggering growth of TSMC was its fabless client, InvenSense for which the company fabricated 3-axis gyroscopes and 6-axis inertial measurement units (IMU). InvenSense accounted for the largest share of market of 6-axis inertial measurement units (IMU), and 3-axis gyroscopes in 2014. Data processing became the largest application segment of the MEMS foundry outsourcing market in 2011, owing to the large volume fabrication outsourcing of Inkjet print heads from HP. The medical and health care represents only a small volume application segment of the MEMS foundry outsourcing market. With the growing digital media, and downfall in print advertisement, the market is not expected to witness high growth during the forecast period.

Silex Microsystems, Teledyne Dalsa, Innovative, X-Fab, Tronics, Jazz Semiconductor, and Global Foundries, are among the other major pure-play foundries.  Most of the pure-play foundries are expected to remain extremely focused on the MEMS fabrication during the coming years. Over the past four years, Sony Corporation held a significant market share of mixed mode MEMS foundry outsourcing Market. The staggering growth of the Knowles Electronics (one of its major foundry partner) led to the growth of the foundry revenue of Sony Corporation during all these years.