Asia-Pacific (APAC) was the largest automotive sensors market, in the world, in terms of volume, between 2015 and 2019 (historical period), and it is expected to be the fastest growing region in the forecast period. However, Europe appeared to be the largest market in terms of value during the historical period. This is because of the existence of the mandatory policies regarding installation of automatic emergency braking systems and other vehicle safety features, which boost the demand for automotive sensors in the region. 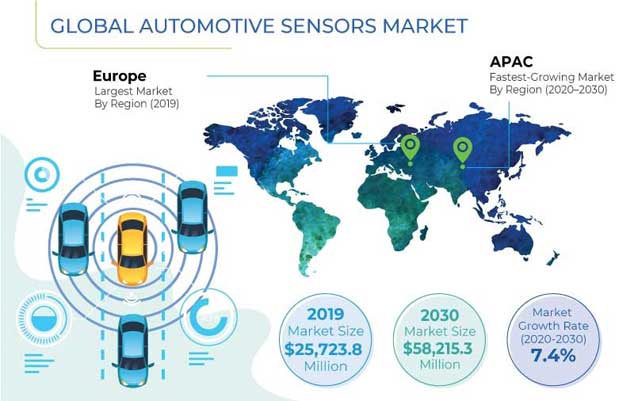 The ongoing technological advancement in the automotive sensors as well as in the automotive industry is a major trend being witnessed in the automotive sensors market. For instance, the introduction of different advanced driver-assistance systems (ADAS) sensors, such as radar, light detection and ranging (LiDAR), camera, and ultrasonic sensor, is a result of massive technological innovations. Furthermore, in the recent years, the concept of sensor fusion has gained much popularity in the automobiles. For instance, however all radar, LiDAR, ultrasonic, and other sensors have their own limitations, when combined altogether, these improve ADAS functions like cross-traffic assistance and obstacle avoidance.

The prevalent laws regarding emission standards and mandatory vehicle safety requirements, in different countries across the world, increase the requirement for deployment of highly advanced automotive sensors in the vehicles, which drives the growth of the automotive sensors market. For instance, Europe has mandated several driving-assistance features to be implemented in the vehicles like advanced emergency braking, emergency stop signal, tire pressure monitoring system, lane keeping assist system, reversing camera or detection system, intelligent speed assistance system, and drowsiness and attention detection system. Thus, the increasing government regulations safety requirement is propelling the demand for automotive sensors and act as a major driver for the market. 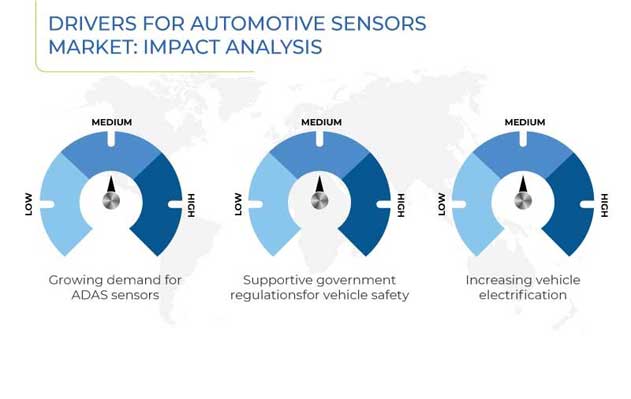 The position sensor category led the automotive sensors market, on the basis of type, during the historical period. This is owing to their widespread application in different vehicle parts, like brakes, clutch, engine, transmission, and chassis, in order to determine steering wheel position, motor rotor position, gear position, throttle position, pedal positions, seat positions, and the position of various knobs, valves, and actuators.

The fastest growth in the automotive sensors market is expected to be witnessed in the ADAS sensors application category during the forecast period. This can be due to the fact that in different countries across the world, specific ADAS features have been made mandatory to incorporate in the vehicles produced.

The micro-electromechanical system (MEMS) category is expected to grow at a faster rate during the forecast period, in terms of technology, in the automotive sensors market. The growing popularity of MEMS sensor is mainly attributed to its better tolerance for thermal development along with its less power consumption level.

The automotive sensors market on the basis of vehicle type witnessed the largest demand in the passenger car category in 2019. This is attributed to the fact that most of the technological developments in the automotive industry, in terms of electrification and autonomous driving, are being implemented in the passenger cars, which is creating higher need for sensor usage in these vehicles.

The demand for the sensors by the original equipment manufacturers (OEMs) was higher in 2019 in the automotive sensors market. This is owing to the fact that most of the sensors which are present in a vehicle are installed during vehicle manufacturing, as these are crucial for the functioning of the vehicles.

Geographically, APAC was the leading automotive sensors market in terms of volume, during the historical period, and it is expected to retain its dominance throughout the forecast period. Moreover, the region is also projected to exhibit the fastest growth during the forecast period. Led by China, the region is the hub of automobile production accounting for over 50% of global vehicle production each year, which increases the installation of huge number of sensors in the vehicles. Moreover, maximum electrification of vehicles is taking place in this region, which further boosts the demand for automotive sensors. 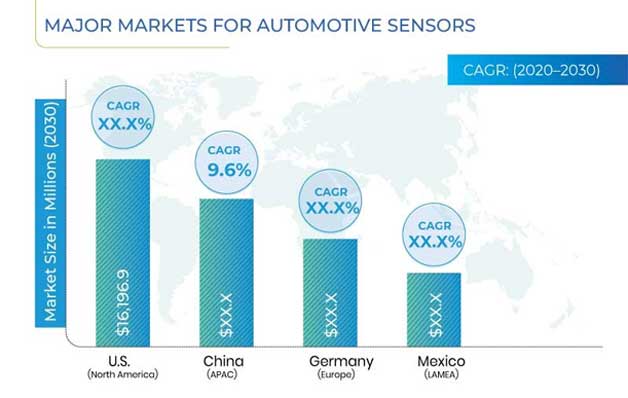 The global automotive sensors market is moderately fragmented in nature, with the top six players accounting for around 60.0% of the total revenue in 2019. Robert Bosch GmbH was the market leader attributed to its robust product portfolio along with its vibrant presence in over 60 countries across the world. Some of the other major players operating in the market are DENSO CORP., Valeo SA, Panasonic Corp., OmniVision Technologies Inc., ON Semiconductor Corp., Sensata Technologies Holding plc, TE Connectivity Ltd., NXP Semiconductors N.V., Analog Devices Inc., Continental AG, Delphi Technologies PLC, Infineon Technologies AG, Melexis NV, and Allegro MicroSystems LLC.

In recent years, the major players in the automotive sensors market have taken several strategic measures, such as product launches, partnerships and collaborations, and facility expansion, to gain a competitive edge in the industry. For instance, in November 2019, Allegro MicroSystems LLC launched the industry’s first gear tooth sensor integrated circuit (IC) ATS17501. The sensor is designed to provide incremental position for electric vehicle traction motors operating up to 30,000 revolutions per minute (RPM) and would provide highest speed switching up to 40 kHz. Also, in October 2019, ON Semiconductor Corp. entered into a partnership with Almotive GmbH to develop prototype sensor fusion platforms for automotive applications.

Based on Geographical Analysis