Europe was the largest region, in terms of value in the ADAS sensor market, during the forecast period. The development rate of autonomous vehicles is growing significantly in the region, which majorly contributes to the progress of the market. Moreover, the ongoing technological innovations by the major automotive players, along with the governments’ extensive support, in terms of policy implementation and financial benefits, is further expected to drive the growth of the region’s market. 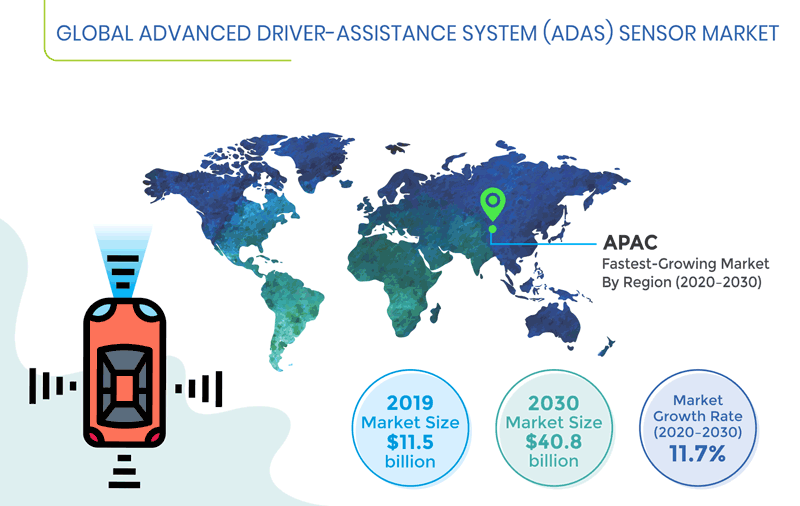 The growing adoption of long-range radar (LRR) sensors in vehicles is a major trend being observed in the ADAS sensor market. An LRR has the ability to detect signals from a greater distance (covering three motorway lanes, equaling up to 150 m in distance), when compared with a short-range radar (SRR). Thus, the superior data detecting capacity of LRRs generates adequate push for its rapid adoption, which is why such products are trending in the market.

The growing adoption of semi-autonomous vehicles is a major driver propelling the growth of the ADAS sensor market. Different countries across the world have made it mandatory for vehicle manufacturers to install different advanced driver-assistance features. The compelling promise of enhanced passenger safety and smoother road traffic the autonomous technology holds is a primary reason for the adoption of these vehicles. As a result, most of the major vehicle manufacturers are now providing advanced driver-assistance system, such as automatic emergency braking, adaptive cruise control, anti-lock braking system, and automatic parking, in their new vehicles, to provide a safer driving experience to customers. This, in turn, is driving the demand for advanced driver-assistance system sensors across the world. 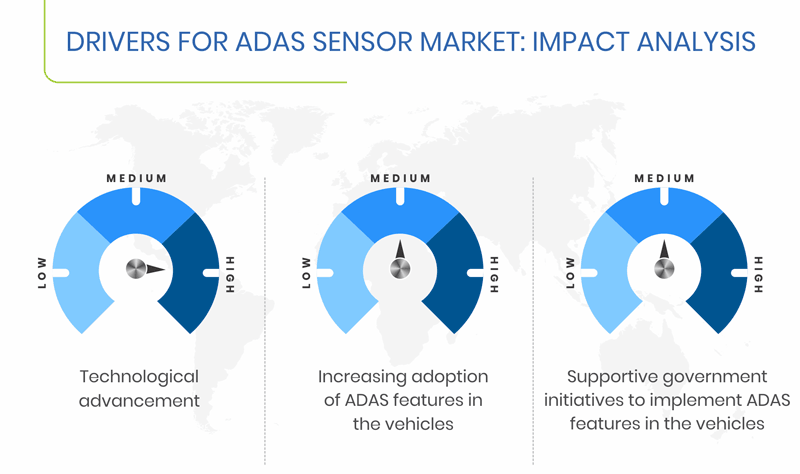 Semi-autonomous vehicles, led by level 1 automation, were the larger ADAS sensor market category during the historical period, based on vehicle autonomy. This is because, in many countries, the basic ADAS features in level 1 autonomous vehicles have been made mandatory in vehicles. To achieve level 1 automation, the vehicle should be equipped with at least one of the ADAS features (either for steering or acceleration) or electronic stability control (ESC). The National Highway Traffic Safety Administration (NHTSA) in the U.S. has mandated the use of ESC in all passenger vehicles being manufactured since 2012. This eventually made all passenger cars semi-autonomous, as ESC-equipped cars are considered level 1 autonomous cars.

Geographically, Europe was the largest region in the ADAS sensor market during the historical period. This is because the prevalent regulations in the region are well suited for the enhancement of the autonomous car market. For instance, in Spain, the regulations implemented by the Directorate General of Traffic (DGT) encourage the functionality of all self-driving vehicles up to level 5 on the roads. Further, the initiatives taken by the major players operating in the region have further contributed toward the growth of the regional market. For instance, in April 2019, Groupe PSA launched a pilot project, as part of the European L3Pilot project, in order to test level 3 autonomous driving functions. The testing operations are being carried out on the open roads of France.

In recent years, the major players in the ADAS sensor market have undertaken several strategic measures, such as investments, partnerships, and service launches, to gain a competitive edge in the market. For instance, in January 2020, Robert Bosch GmbH announced that it has developed a sensor that would enable cars to see a 3D view of the road. The development is intended to lower the cost of technology and speed up the development of self-driving vehicles. Further, in April 2019, NXP Semiconductors N.V. entered into a strategic collaboration with Hawkeye Technology Co. Ltd., to develop autonomous vehicles in China. Under the partnership, Hawkeye Technology Co. Ltd. would offer its deep expertise in 77 GHz radar sensors to NXP Semiconductors N.V., in order to create 77 GHz radar solutions for the Chinese automotive market.