The major driving factors are the limited supply of lithium metal and the rising popularity of EVs across the globe, due to the subsidies given in different countries. Essentially, the declining cost of EVs owing to road tax relaxations and government subsidies is driving their popularity. This, in turn, increases the need for these batteries, especially for e-scooters and e-motorcycles. 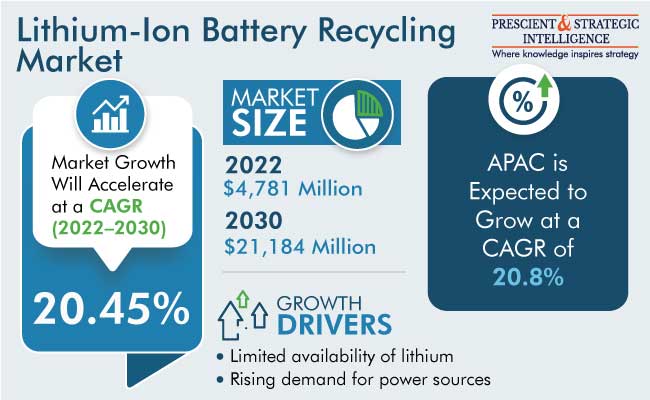 The LCO battery category held the largest market share in 2022, and it is expected to maintain its dominance throughout the projection period. The high energy density and discharge voltage of LCO batteries, which makes them more suitable for power tools, consumer electronics, such as mobile phones, laptops, and tablets, and hybrid/full electric vehicles, is the key driver for the market in this category.

The NMC category is expected to grow at a significant CAGR, of 21.4%, during the forecast period, due to the long life, higher energy density, lower cost, and rising usage of these variants in energy storage systems and EVs.

The automotive category, which dominated the market in 2022, is also set to witness the highest CAGR, of 20.9%, during the forecast period. This can primarily be credited to the booming uptake of electric motorcycles, scooters, buses, trucks, and cars across the globe. In addition, the limited availability of lithium drives the recycling of these batteries. With the increasing demand for electric vehicles, used Li-ion batteries are also predicted to see an expansion in demand in the automotive sector. The declining price of these power storage devices, along with the growing efficiency of electric vehicles, is also a growth factor.

This is because the battery makes up over 50% of an EV’s sales price; hence, with the reducing battery costs, EVs are becoming affordable. Moreover, the Indian government approved the Phase II of the Faster Adoption and Manufacturing of (Hybrid &) Electric Vehicles in India (FAME) scheme in April 2019, which entails an investment of INR 8,596 crore as incentive for EV buyers. 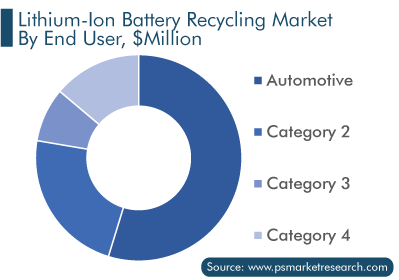 The North American lithium-ion battery recycling market is expected to grow at a significant rate in the upcoming years. This can majorly be ascribed to the U.S. being one of the biggest markets in the world for these energy storage systems. The growth in EV usage in the region, with the government's incentives and other policies, is projected to drive this domain in the next few years. Moreover, the rising investment by top players in the electric vehicle industry, along with the setup of the charging infrastructure, will enhance recycling demand.

APAC is expected to grow at a significant CAGR, of 20.8%, during the forecast period, on account of the rising adoption of EVs. Essentially, the rising awareness among customers of the environmental benefits of EVs in the developing countries of the region is set to boost the industry expansion. To fulfill the requirement for Li-ion batteries in automobiles, manufacturers are focusing on the recycling of the used ones.

Moreover, the Indian government implemented updated Battery Waste Management Rules in 2022, in order to make battery manufacturers responsible for collecting those that have reached the end of their life, recycling them in an environment-friendly manner, and recovering the key materials, also setting targets for the minimum amount of material to be recovered. This is since the country imports most of these power sources and their raw materials from the People’s Republic, which makes the end products, especially EVs, costly for the common folk. 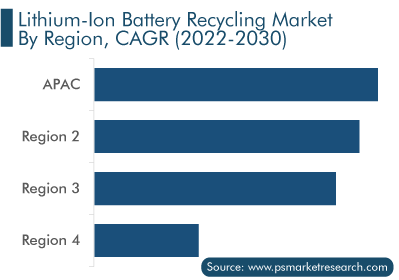 Europe is also expected to grow at a significant CAGR during the forecast period, because of the European government's high recycling efficiency standards. Further, the growing awareness on zero-emission vehicles is the key driving factor for this market.

The growing usage of lithium-ion batteries across various applications has resulted in the rising concerns over the limited availability of the base metal. The mining of This metal has a detrimental impact on the environment, which includes water pollution due to chemical leakage. Owing to this fact, Li-ion battery recycling has picked up of late. Moreover, since no such material at present has characteristics similar to lithium, battery manufacturers are increasingly focusing on the reuse of lithium batteries, to provide an adequate amount of the metal for batteries for different uses.

In this regard, in June 2021, Germany-based chemical manufacturer BASF announced plans to start the construction of a new battery recycling and prototype manufacturing unit at its cathode active material (CAM) facility in Schwarzheide. When lithium-ion batteries reach their end of life, the company targets to extract cobalt, manganese, lithium, and nickel, by using an improved solution.

In recent past years, the demand for recycled lithium-ion batteries has risen significantly in the automotive industry. This has been a result of the rising adoption of electric vehicles, specifically in the U.S., Germany, Sweden, Norway, the Netherlands, and China, along with a few developing Southeast Asian countries, due to the rising concerns for the environment. According to the IEA, in comparison with 2020, electric car sales almost doubled to 6.6 million (almost 9%) in 2021, and the total number of electric cars on the street was 16.5 million. Moreover, in an optimistic forecast, the IEA expects more than 300 million electric cars on the roads by 2030, which is, in turn, predicted to drive the reuse of lithium-ion batteries.

The electrical & electronics industry is one of the largest consumers of lithium-ion batteries, owing to their usage in mobile phones, laptops, tablets, and several other electronic gadgets. With the growth of the electrical & electronics sector, particularly in the developing nations of the APAC region, such as China, India, and Thailand, the demand for these sources of energy has been on the rise. Moreover, due to the limited availability of lithium against its projected high-volume demand in the electronics sector, the market for recycled lithium-ion batteries holds a strong potential for growth in the coming years.

In this regard, the increasing investments in the electrical & electronics sector are likely to fuel market growth across developing nations. For instance, the Made in China 2025 initiative aims at making China the global powerhouse of high-tech industries, along with reducing its dependence on foreign technology imports.

Based on Recycling Process

Based on Battery Component

Frequently Asked Questions About This Report
How big is the lithium-ion battery recycling market?+

The market for lithium-ion battery recycling solutions was valued at $4,781 million in 2022.

Which is the most-widely recycled product in the lithium-ion battery recycling industry?+

Why is APAC the largest lithium-ion battery recycling market?+

APAC dominates the market for lithium-ion battery recycling solutions because it is the largest producer of these batteries, EVs, and consumer electronics.

What are the biggest lithium-ion battery recycling industry drivers?+

The biggest drivers for the lithium-ion battery recycling industry are the limited availability of lithium and the rising demand for such power sources.

What is the lithium-ion battery recycling market growth potential?+