The global hybrid and electric vehicle battery market size in 2021 was $47,283.4 million, and it is expected to advance at a CAGR of 28% during 2021–2030, to reach $436,112.7 million by 2030. This is ascribed to the surge in popularity and deployment of EVs and hybrid vehicles, and the advancement in technologies of lithium-ion batteries, which are used in EVs.

The popularity of hybrid vehicles and EVs is increasing at a rapid rate across the globe. As a result of the increased demand for EVs, major vehicle manufacturers are entering the industry. The manufacturers, such as Tata Motors, Toyota, Hyundai, and Mercedes-Benz, are developing EV models in order to strengthen their positions in the industry. Also, leading automakers are cooperating with battery players to capitalize on the fast-growing EV sector. Thus, with major automakers exhibiting interest in the EV industry, the demand for EV batteries is increasing.

Aside from economies of scale, major scientific advancements, such as improved anode and/or cathode materials and lower overall battery pack production costs, are predicted to lower the average selling price of H&E vehicle batteries during the projection period. Also, the increasing demand for zero-emission automobiles, as a result of the growing fuel prices, depletion of fossil fuel supplies, and tougher environmental regulations, has influenced sales of such batteries.

As producers form strategic collaborations with automobile manufacturers and shift their focus toward advanced technologies, the industry will have brighter prospects. Further, growing environmental concerns, including rising pollution levels and global warming, have prompted producers to recommend alternative energy sources to power vehicles. 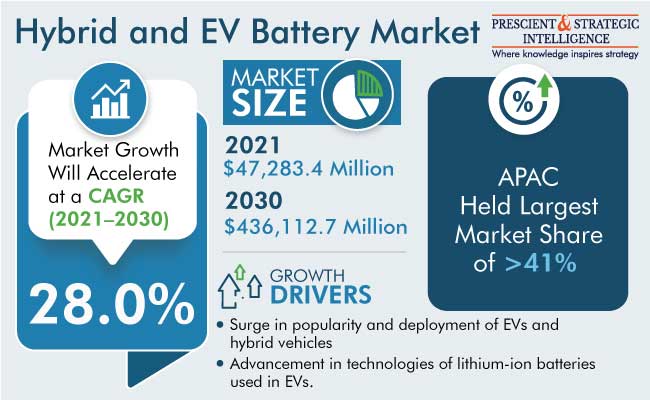 Rising Number of Manufacturers To Positively Impact the APAC Market

APAC is the largest revenue contributor to the market, accounting for $19,480.7 million in 2021, due to the expanding penetration of battery-powered vehicles in the region. The EV sales are projected to expand significantly over the forecast period, as a result of the rising environmental pollution concerns, surging need for fuel-alternative vehicles, and decreasing pieces of batteries.

The main reason for lower battery prices in APAC than in other regions is that there are many battery manufacturers in China, Japan, and South Korea. Additionally, the region's plentiful supply of raw materials, including lithium and cobalt, facilitates the fabrication of batteries in large quantities.

Moreover, hybrid vehicles offer tremendous opportunities to market players in developing nations, due to government initiatives and support, including tax breaks, incentives for manufacturers and purchasers, and an emphasis on the usage of hybrid commercial vehicles, in the region. 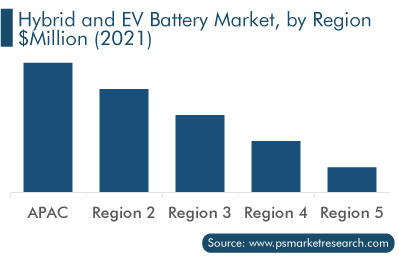 The market in North America is expected to grow as a result of the increased government support for research and development (R&D) of lithium-ion batteries, a greater emphasis on hybrid vehicles and EVs, several tax breaks offered by governments, and the affordability of electric passenger cars in the region. Furthermore, the rise in demand for energy security and the rapid depletion of fossil fuels are likely to generate numerous chances for the regional market for H&E batteries during the forecast period.

The U.S. is the leader in the North American market. Increased sales of EVs and HEVs in the country are predicted to drive the demand for lithium-ion batteries over the forecast period. This is also due to the support of federal legislation laws and the presence of major players in the country.

Europe has emerged as a significant contributor to the market. This is because it is one of the top regions for the production and sales of EVs. Governments of many nations in Europe have heavily supported and invested in R&D in the EV industry during the past few years. Moreover, the rapid growth in the demand for lithium-ion batteries, rising use of EVs due to environmental concerns, and significant expenditures are all geared toward the expansion of the hybrid and electric vehicle battery market growth in the region.

Germany is the market leader in the region. This is attributed to the surge in the use of lithium-ion batteries due to the increased adoption of EVs, the huge demand for energy storage devices, and the development of renewable energies in the country.

In LATAM and MEA, the hybrid and electric vehicle battery market demand in Brazil, the U.A.E, and South Africa is projected to grow at rapid rates throughout the projected period. Additionally, Mexico has been the main focus of global automobile businesses and they seek to invest in the nation due to the high demand for EVs.

Lithium-ion batteries (LIBs) accounted for the largest revenue share, of more than 90%, in 2021. These batteries are perfect for hybrid and electric vehicles because of their advantages such as excellent energy efficiency, long cycle life, no memory effects, and their fast-falling prices. Moreover, the adoption of LIBs has increased, as a result of the growing use of EVs and plug-in hybrid electric vehicles (PHEVs), and it is projected that this trend will continue in the coming years as well.

Additionally, the EPA’s restrictions on lead contamination and the ensuing environmental dangers, along with regulations on lead-acid battery storage, disposal, and recycling, have reduced the demand for lead-acid batteries. This has increased the need for lithium-ion batteries in automobiles.

Greater economies of scale for lithium-ion cells are the result of expanding activities across the industrial landscape. With the rising concentration on electric mobility and the use of LIBs, reducing costs of batteries, and changing dynamics, planners, politicians, regulators, and investors are taking a number of steps to regulate the market. In addition, in order to diversify their revenue streams, battery manufacturers are offering more aggressive pricing and expanding into the stationary storage sector, as a result of the significant investment made by the car industry in pack assembly. 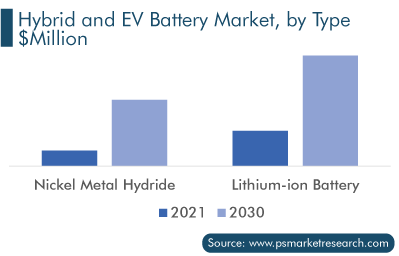 Frequently Asked Questions About This Report
What was the size of the hybrid and electric vehicle battery market in 2021?+

What will be the growth rate of the hybrid and electric vehicle battery market during the forecast period?+

During 2021–2030, the growth rate of the hybrid and electric vehicle battery market will be around 28%.

Which is the largest application area in the hybrid and electric vehicle battery market?+

Electric Vehicle is the largest application area in the hybrid and electric vehicle battery market.

What are the major drivers for the hybrid and electric vehicle battery market?+

The major drivers of the hybrid and electric vehicle battery market include the advancements in lithium-ion H&E car battery technology and the surge in the popularity of hybrid vehicles and EVs.