The global electric scooter and motorcycle market is estimated at USD 24,816 million in 2022, and it is expected to grow at a CAGR of 17% during the forecast period. Government policies in support of environment-friendly vehicles, primarily in emerging economies of APAC, and the growing e-retailing of electric vehicles are playing a pivotal role in the industry growth. 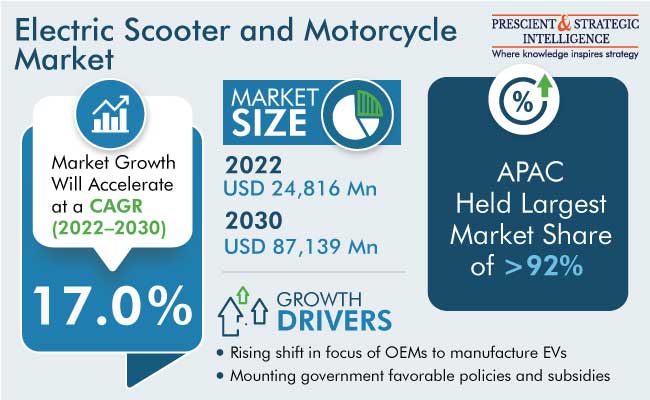 Scooter Is the Most Dominant Product Category

The scooter category accounted for a higher revenue share, of around 74%, in 2022, and it is further expected to maintain its dominance in the electric scooter market during the forecast period. This is ascribed to the rising availability of a considerable number of electric scooter models coupled with their lower cost and early introduction in major regions across the world.

Whereas, the motorcycle category will register faster growth during the forecast period. This high growth can be ascribed to the rise in demand for high-speed two-wheelers, an increase in the number of two-wheeler manufacturers, and high R&D spending by automotive giants.

The Li-ion battery category is the prime revenue contributor to the market, accounting for a revenue share of around 84% in 2022, and it is further expected to dominate the industry in the coming years. This is due to its lower cost and ease of compatibility. Lithium-ion (Li-ion) category is also projected to grow faster during the forecast period. This can be primarily due to factors such as the growing preference for eco-friendly Li-ion batteries by original equipment manufacturers (OEMs) and various other advantages associated with these batteries. 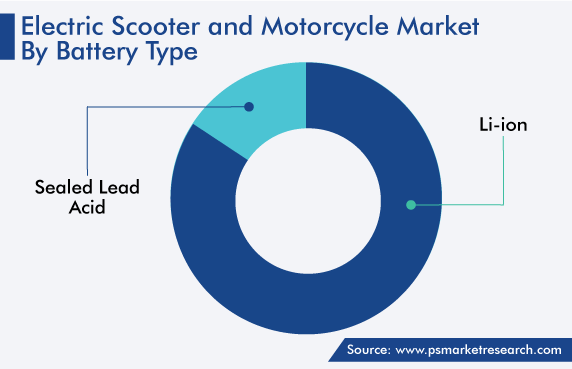 Subsidies and Tax Concession on Eco-Friendly Vehicles Drive the Market

To encourage the use of environment-friendly vehicles with low emissions, the reduction in registration tax and other liabilities such as subsidies have been offered by governments in different countries. Subsidies have helped the sector by making electric scooters and motorcycles more viable for customers. Some of the supportive initiatives include tax exemptions, purchase rebates, and financial incentives for buyers of electric vehicles. Such factors are significantly responsible for the rise in the development and adoption of these vehicles by users across the globe, which, in turn, drive the electric scooter and motorcycle market.

Customers buying environmentally friendly vehicles are now enjoying tax concessions, as governments are trying to scale up the adoption of electric scooters and motorcycles among middle-class to lower-class commuters through various tax relaxations. Further, incentives for EVs are provided by several national and local governments to provide financial help to consumers and manufacturers for the purchase and production of plug-in and battery-assisted light and heavy motor vehicles. While the amount of incentives depends on the battery size and the vehicle traveling range, some countries have even extended the benefits to very small-distance commercial electric scooters and motorcycles. Thus, these factors have propelled the market growth.

The 48 V battery category accounted for the largest revenue share in 2022, and it is also expected to maintain its dominance during the predicted period. This is attributed to the surging consumer preference for 48 V battery-powered two-wheelers, due to their higher benefit-to-cost ratio and the increasing consumer demand for high-speed vehicles, along with durable bodies and improved aesthetics.

The battery technology category will register significant growth in the coming years, This can be attributed to the affordability of battery-operated scooters. However, the plug-in category is expected to hold a larger electric motorcycle market share by 2025, in terms of value, owing to its low cost and easy operability.

Regulatory bodies across several countries have encouraged the adoption of eco-friendly vehicles, providing a favorable environment for the growth of the electric scooter and motorcycle market through the introduction of incentives and an increase in support toward setting up manufacturing facilities for these vehicles. These favorable conditions have also been extended to several other segments of this ecosystem, including battery manufacturing and charging station installation, which are gaining huge public investments in various countries. For example, in Hong Kong, the government offers fiscal redemption in terms of registration tax concession on the purchase of electric motor vehicles.

Moreover, by relaxing the maximum power limits for electric bikes (e-bikes) and other low-powered vehicles (LPVs), some governments have driven the adoption of electric scooters and motorcycles in hillier locations. For example, New Zealand legislation does not principally refer to electric scooters as motor vehicles, unlike most other countries. These scooters do not meet the motor vehicle definition and can be used without any registration or driver’s license, thereby contributing to the growth of the market in the country.

APAC Is the Prime Revenue Contributor

APAC accounted for the largest revenue share, of around 92%, in 2022, and it is expected to maintain its dominance during the forecast period as well. The growth in the regional market can be attributed to rising urbanization, increasing per capita income, and favorable government policies for electric vehicles, which are resulting in the high adoption of electric scooters and motorcycles in the region.

Moreover, countries such as China, Japan, and India are the prominent markets for electric scooters and motorcycles in the APAC region. Additionally, China held the majority of revenue share in 2021, owing to the presence of a large number of industry giants, high R&D spending, and the increased need for an environment-friendly mode of transport, coupled with the rising population in the nation.

On the other hand, the European market will witness the fastest growth during the forecast period, advancing at a CAGR of around 22%. This high growth can be attributed to the rapid urbanization in the region, which results in increased levels of air pollution, greenhouse gas emissions, and energy wastage. To overcome these issues, governments are focusing on the adoption of efficient and sustainable mobility solutions, including electric scooters and motorcycles, to meet the demands of an increasing number of daily commuters. 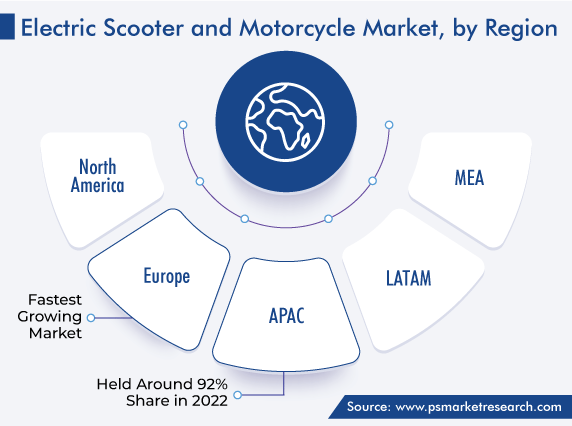 Key Players in the Electric Scooter and Motorcycle Market Are:

Frequently Asked Questions About This Report
What was the size of the electric scooter and motorcycle market in 2022?+

The electric scooter and motorcycle market size stood at USD 24,816 million in 2022.

What will be the growth rate of the electric scooter and motorcycle market during the forecast period?+

During 2022–2030, the growth rate of the electric scooter and motorcycle market will be around 17%.

Which is a larger battery type in the electric scooter and motorcycle market?+

Li-ion is a larger battery type in the electric scooter and motorcycle market.

What are the major drivers for the electric scooter and motorcycle market?+

The major drivers of the electric scooter and motorcycle market include the surging demand for electric two-wheelers due to the rising fuel prices, the rising shift in focus of OEMs to manufacture EVs, and the mounting government favorable policies and subsidies.