From powering a host of electronic gadgets that we are heavily reliant in today’s time, such as mobile phones and laptops, to propelling modern-day electric automobiles, applications of lithium-ion batteries are uncountable in this fast-paced world. With advanced and more sophisticated technologies making inroads every day, the deployment of lithium-ion batteries has grown manifold and become indispensable for reasons quite overt. The sustainable and stable nature of these batteries is the key factor these batteries have become a rage since their advent. For several years, nickel–cadmium batteries were considered suitable for applications ranging from mobile computing to wireless communication; however, lithium-ion, since their emergence, managed to gain customer acceptance in no time and are, today, the most promising battery chemistry employed in the world. 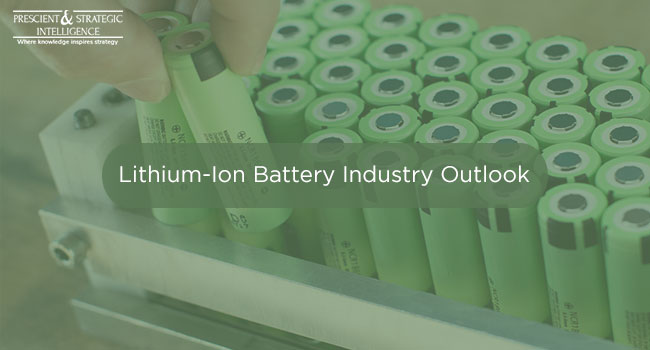 When This Battery Chemistry Bagged the Nobel!

Interestingly, the 2019 Nobel Prize in chemistry was awarded to lithium-ion battery pioneers – John Goodenough, Stanley Whittingham, and Akiro Yoshino. The trio’s efforts were acknowledged for putting new, clean rechargeable battery technology on the global platform and introducing a solution to mitigating global concerns of climate change and eliminating dependence on fossil fuels.

Acquainting with the Technology

In layman terms, a lithium-ion battery is an advanced technology that leverages lithium ions as the key component for its electrochemistry. When compared with other rechargeable batteries, for instance, nickel–cadmium and nickel hydride, lithium-ion batteries have higher energy density. In addition, these battery cells can deliver a larger amount of current for applications demanding high power; have lower maintenance cost; and do not demand scheduled cycling for their maintenance. Besides, they have a comparatively low self-discharge rate. These batteries are quite easy to dispose of, as they contain no toxic cadmium. With the rising need for a reliable power source for not only portable electronics but for applications ranging from electric transportation to aerospace, lithium-ion batteries are witnessing a steady rise in their demand across the world. Some of the key benefits of these batteries have been elaborated below:

Longevity: The long service life of lithium-ion batteries makes them a good return-on-investment solution, with the average life of a battery pack being eight years. These batteries have up to 10 times longer life span than their lead–acid counterparts.

Quick and Easy Charging: The charging time of these batteries is generally less than that of other batteries, which also means less downtime of the machines employing these batteries. Moreover, these batteries can be opportunity charged, which means they don’t have to be fully charged in between the uses. Unlike lead–acid batteries, energy depletion and temperature fluctuations barely affect lithium-ion batteries’ power delivery.

Sustainability: Lithium-ion batteries offer significant benefits over fossil fuel-based power alternatives. These batteries contain relatively low levels of toxic heavy metals, which are otherwise found in batteries such as lead–acid and nickel–cadmium, as the prolonged exposure to such metals is harmful to the human, animal, and plant life and to the environment at large. This is the reason lithium-ion batteries are considered eco-friendly in nature.

Lightweight: Compared to other battery chemistries, lithium-ion batteries provide the same or mostly greater energy at less than half the weight and size. This implies more flexibility and easier installation. The electrodes used in these batteries, namely lithium and carbon, are lightweight in nature, which results in comparatively smaller and lighter batteries than their older counterparts, such as lead–acid batteries. For instance, a typical 51 Ah lithium-ion battery weighs about the same as a 24 Ah lead–acid battery but provides around twice the capacity. Moreover, since these batteries comprise lithium, which is a highly reactive element that can release and store energy in large amounts, they have a high energy capacity even in small sizes.

Low Maintenance: Unlike lead–acid batteries, which require their water levels to be constantly monitored, lithium-ion batteries don’t need to be watered for operational purposes. This, in turn, reduces the maintenance needed to keep them operational. These batteries also eliminate the need for engine maintenance.

Geographically, Asia-Pacific (APAC) is projected to remain the largest and fastest-growing market for these batteries in the coming years, and this can be mainly attributed to the surging demand for lithium-ion battery-powered smartwatches, laptops, vacuum cleaners, and other smart gadgets as well as the growing popularity and adoption of electrical vehicles in the region. Moreover, the plummeting prices of these vehicles on account of increasing environmental concerns and government subsidies to boost their adoption among the people are supporting the market for lithium-ion batteries in the region.

The rising demand for consumer electronics and the presence of established market players are also strengthening the industry here. Additionally, the region is projected to witness technological advancements in energy storage, which, in turn, would propel the market growth here.

Globally, too, the demand for these batteries is increasing on account of the rising sales of electric vehicles. As per the statistics given in Global EV Outlook 2018, in 2017, a total of 3.1 million electric passenger cars were sold, witnessing an increase by 57% from the year 2016. Thus, the growing sales of electric vehicles are boosting the demand for these batteries, which make for the prime source of power in these automobiles.

Consumer electronics can be viewed as the largest application area of lithium-ion batteries in the world. These batteries are widely being used to power tablets, smartphones, cameras, laptops, music players, handheld game consoles, and several other electronic devices of everyday use, including electric toothbrushes, shavers, and lights. A lithium-ion battery has higher energy density than nickel–cadmium and nickel-metal hydride battery chemistries, due to which its demand in consumer electronics is comparatively high.

These players continue to focus on growth measures such as product launches, collaborations, and expansions to strengthen their foothold and gain a competitive edge. For example, LG Chem and Vingroup’s subsidiary VinFast Trading and Production LLC entered into a joint venture in April 2019 for the production of battery packs for former’s electric scooters. Besides, in June 2018, Hitachi Chemical Co. Ltd. and Silatronix Inc. signed an agreement for the manufacturing of electrolyte materials, which would include the use of latter’s organosilicon compounds as additives with its anode materials for lithium-ion batteries to lengthen their life and improve their stability in terms of storage at high-temperature environments.

It is needless to state that these batteries have drawn interest as a promising energy storage chemistry owing to their high energy density, low self-discharge, and long lifespan. With their applications beyond running the apps on phone to powering life-saver medical equipment and luxury yachts, these batteries have maintained both the essential and luxury aspects of modern life. Here are the key uses of rechargeable lithium batteries:

Reliable Power Backup Source: With lithium-ion batteries in place, the need of emergency power backup or a stable power source is rightly met. The battery differs from a regular generator in the sense that it offers instant power in order to run or stop the equipment it is connected to. The battery is hugely adopted to power computer systems and medical equipment. Besides, these batteries come in handy as useful power packs for laptops and modern mobility solutions, such as electric wheelchairs and stair lifts.

Powering Future-Ready Vehicles: Offering a stable source of long-lasting power, lithium batteries provide power for long journeys and result in low discharge in between uses. These batteries are widely being used to power electric vehicles with increased efficiency due to their low weight and size as compared to lead–acid batteries.

Solar Power Applications: The use of solar power across the world has increased manifold with the growing concerns over environment emissions caused by fossil fuels. Rechargeable lithium batteries are the best match for solar panels because of how they charge and how fast they charge. Solar panels have low-resistance charging, which is what supports the application of lithium batteries in them. These batteries charge quickly, thereby maximizing the potential for power storage from sunrays.

With Tesla launching its Model S, lithium-ion batteries became a global rage in no time, especially when it came to their deployment in the automotive sector to power next-generation electric automobiles. Thus, it would not be wrong to say that with the whole world pushing for portability and easy powering of gadgets and automobiles, lithium-ion batteries are expected to see its demand only proliferating with time!