The global shavers market size in 2021 was $6,732.1 million, and it is expected to advance at a CAGR of 6.0% during 2021–2030, to reach $11,334.0 million by 2030. The market is primarily driven by the swift urbanization, rising consumer awareness of appearance, and increasing disposable income. Moreover, the surge in the middle-class population has greatly raised the demand for a variety of consumer goods, many of which were formerly deemed luxury commodities. The rising standard of living has encouraged the usage of high-quality shavers, particularly electric shavers. Furthermore, the long-term cost savings associated with these accessories are a major driver of their usage.

Furthermore, shavers are associated with attractiveness, as a result of which celebrity endorsements are a significant technique of promotion in this sector. Celebrity endorsement activities have grown significantly in the shaving industry over the last few years, as companies are organizing promotion campaigns with well-known athletes and movie stars. 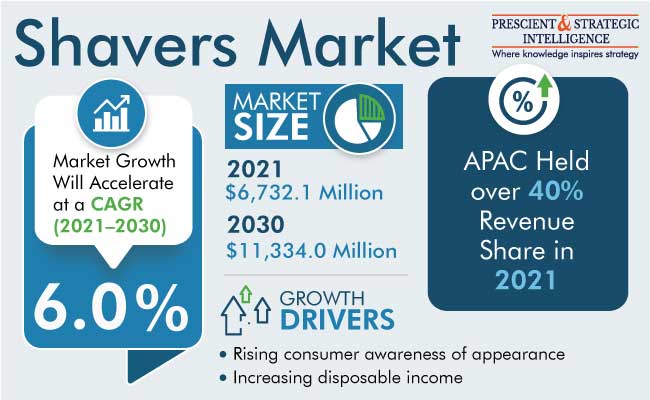 Furthermore, participants are constantly looking for new ways to reduce operating expenses, while increasing output, in response to the rising production costs. Established businesses examine their operational chains from both the output and input viewpoints. In light of this, developing new strategic alliances with key players or suppliers, in order to reach higher levels of efficiency, is crucial for players to cut down operating costs.

Hypermarkets/supermarkets held the largest shavers market share in the distribution channel segment, of more than 60%, in 2021. This is due to the heavy discounts and offers they provide, in addition to the great convenience in shopping associated with these places.

The online channel is expanding at a rapid pace too, because of the increasing adoption of mobile devices and smartphones and penetration of the internet. The category is also driven by the changes in consumer purchasing behavior and an increase in the number of providers selling online. E-commerce has lately emerged as an important platform for the sale of shaving items. Consumers' busy schedules encourage them to favor online purchasing over physical shopping. Moreover, apart from third-party distributors, almost all the manufacturers of these accessories sell products via their websites. 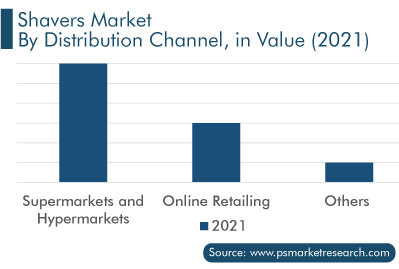 Men dominated the end user segment in 2021. The growing self-grooming awareness and increasing disposable income are expected to positively impact the growth in revenue generation from this gender. Another reason for the growth of this category would be the spread of awareness on grooming through YouTube channels, commercials, social media blogs, and influencers.

In the same way, due to the growing desire of female consumers to enhance their overall appearance, female grooming has taken on major importance over the past several years. Due to the increasing body exposure caused by the modernization of society and changes in fashion trends, the pool of female consumers is expanding. Compared to developing countries, developed countries have a higher proportion of female users of these devices.

APAC held the largest share, of more than 40%, in 2021, on account of the rising living standards and incomes. This is reflected in the rapidly expanding demand for luxury grooming accessories, including electric shavers. Shaver sales have essentially been boosted in APAC as a result of the region's rapid population growth, which is mostly attributable to China and India.

Furthermore, due to the improvements in the living standards, the market in India is expanding quickly. In India, millennials make up the majority of the population. As they become more conscious of how they look, they are gradually migrating toward high-end and technologically advanced products. Even in rural areas, a large number of millennials see it as an important item.

Hence, players could tap the rising popularity of grooming items in the rural areas of India to raise their profits. As millennial customers in India have grown more mindful of their appearance, they are now thinking of spending more on grooming. Hence, in the coming years, the shift in millennials’ attitude toward grooming is expected to lead to an increase in the use of shavers throughout the nation.

Shavers market sales in China have increased steadily over the past 10 years as well. The economy of China has changed as a result of the vigorous expansion of its commercial capabilities and consumer goods consumption. Currently, the market in China continues to boom with the decade-long rise in imports, exports, industrial production, and financial investments. Shaver sales are also expected to increase because of the ongoing consolidation among new companies.

In 2021, the U.S. had the larger shaving market size in North America because of its substantial population and high level of urbanization. Further, the easy access to organized retail and reliable internet retailers has made it simpler for citizens to purchase consumer electronics. Shaver sales have also increased as a result of the internet promotions and discounts and deals on grooming products. A common practice before purchasing these hair removal products is comparing and assessing product costs and features on online retailing portals. The usage of shavers is, thus, set to rise across the U.S. owing to the improving digital infrastructure.

In Europe, the market for shavers is expanding because of the advancements in and rising demand for shaving products; however, slowly. The biggest market for these accessories in Europe is the U.K. Customers strongly demand customization in shaving products, which is why players are working on personalizing the products, to increase their revenue.

One of the most-promising regions for shaver companies is LATAM, due to the rising demand for hair removal products. Since many customers in this region adopt holistic approaches to beauty care, the need for personal care products has increased. This has also been a result of consumers' busy and evolving lifestyles.

Brazil will continue to be the most-important country for electric shaver companies in LATAM, driven by the rising usage among consumers. Brazilian consumers are more interested in grooming than ever before, and they are devoting more time to maintaining their appearance and skin quality. Brazilians' changing attitude toward grooming is expected to create new chances for businesses to increase the sale of shavers.

The MEA region's market is, likewise, driven by the strong growth in the grooming sector. Specifically, the sale of shavers has increased as a result of Nigeria's expanding youth population. Additionally, the increasing internet usage and celebrity endorsements are all having a beneficial effect on the consumer purchasing behavior. 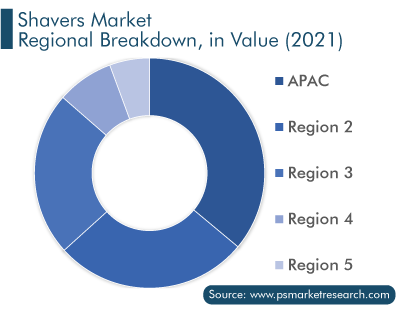 Frequently Asked Questions About This Report
What is the growth potential of the shavers market?+

What are the opportunities for shavers industry players?+

Companies in the shavers industry can gain larger profits by tapping female consumers.

Which channel makes the most sales in the shavers market?+

Most sales in the market for shavers are made through hypermarkets/supermarkets.

What is the regional scenario of the shavers industry?+

APAC is the largest region in the shavers industry, while LATAM is the one that offers the brightest potential.

Men are the larger consumer group in the market for shavers.