Valued at $2.7 billion in 2019, the global electric toothbrush market size is projected to witness a CAGR of 5.7% during the forecast period (2020–2030), reaching $4.8 billion by 2030. Factors that are resulting in the growth of the market include the increasing awareness about the benefits of using electric toothbrushes, unhealthy dietary habits, rising number of oral hygiene initiatives, and rising geriatric population.

The impact of the coronavirus (COVID-19) disease has been considered during the electric toothbrush market size estimation. Lockdowns have negatively impacted manufacturers in major European and North American and some of the important Asian markets. The pandemic negatively impacted the supply chain of numerous sectors, worldwide, during the first two quarters of 2020. The pandemic has led to a reduced trade of a number of products, including smart toothbrushes, as a consequence of the reduced demand, impacted monthly income of individuals, closure of manufacturing facilities in all regions to protect workers, constraints in the handling capacity of goods at ports, and widespread financial distress. 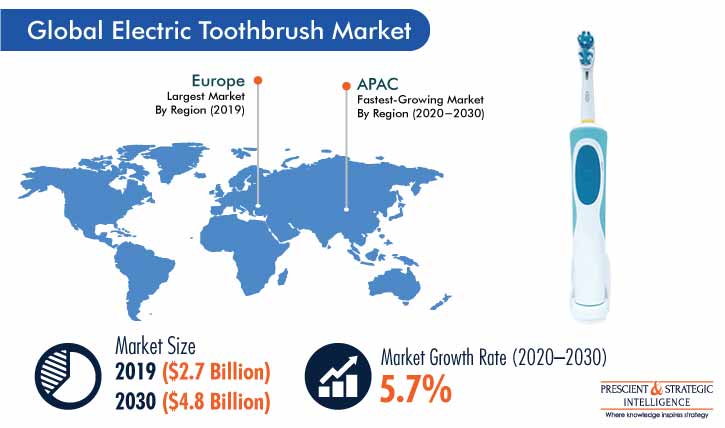 The sonic/side-by-side category is projected to continue its domination on the electric toothbrush industry during the forecast period, on the basis of head movement. The sonic technology offers a thorough cleaning, owing to the fact that it not only cleans the surface of the teeth, by breaking up the plaque and then removing it, but also cleans the hard-to-reach areas inside the mouth. Because of the fluid dynamics and higher number of strokes per minute, such electric toothbrushes are more beneficial for complete oral health.

Rechargeable Category To Grow at Higher Rate in Coming Years

Rechargeable toothbrushes generated the higher revenue in 2019 in the market for electric toothbrush, among the two product types. Furthermore, the category is expected to witness the faster growth during the forecast period. Battery-powered toothbrushes require the user to provide most or all of the brushing action, which includes moving the brush back and forth along all sides of the teeth and gums. On the other hand, rechargeable toothbrushes create much of the cleaning action themselves, with the user only needing to guide them to all areas inside the mouth. These rechargeable toothbrushes are generally richer in features and can provide several oral health benefits.

Furthermore, the online platforms category is also projected to attain significant advance during the forecast period in the market for electric toothbrush, owing to the growing trend of online shopping across the world. Industry players are offering a range of high-tech products on online platforms, where the customer can compare them and select the best-suited product according to their needs.

The adults category, on the basis of end user, registered more sales in the electric toothbrush market in 2019. The rampant unhealthy eating habits of adults, including the heavy consumption of alcohol and tobacco, are leading to poor oral health. This, in turn, is creating a high demand for advanced toothbrushes over the manual ones, as the newer models help customers remove more plaque and prevent gingivitis. Furthermore, these toothbrushes are helpful for adults with orthodontic attachments, such as braces, as they make brushing easier for them.

Europe is the largest region in the electric toothbrush market, in terms of value. This can be primarily ascribed to the increasing consumption of alcohol, tobacco, and a sugary diet, along with the surging geriatric population in the region and prioritization of oral health via collective healthcare initiatives. The increasing consumption of alcohol and a sugary diet is a major concern in Europe. According to the World Health Organization (WHO), the per capita alcohol consumption in the European Union (EU) is the highest in the world.

In addition to this, a report published jointly by the EU and WHO in 2019 posits that the prevalence of heavy episodic drinking was 30.4% in the region. Heavy consumption of alcohol and a sugary diet leads to various oral problems, such as dental caries, periodontal diseases, and destruction of teeth over time. Therefore, the integration of advanced technologies, coupled with the increase in the incidence of these dental problems, is expected to propel the demand for such toothbrushes in the region, thereby benefitting the electric toothbrush market growth.

Among all regions, APAC is projected to attain the fastest growth in the electric toothbrush market, in terms of revenue generation, during the forecast period. The growth can mainly be ascribed to the burgeoning geriatric population, coupled with the rising adoption of online shopping, which is resulting in the easy availability of such toothbrushes in developing countries. According to the World Population Ageing 2019 report by the United Nations (UN), in Asia, there were 395.4 million people aged 65 years and above in 2019, and this number is expected to rise to 954.6 million by 2050.

Elderly people are prone to chronic dental diseases, due to which they could develop sensitive teeth and gums. Oral diseases have been a burden for both developed and developing countries, especially in their rural areas. For instance, according to a recent study published in August 2019 in the Indian Journal of Dental Research, the prevalence of dental caries in the elderly population of India was 76.4%. Thus, the use of these toothbrushes for sensitive teeth by elderly people, coupled with their rising population, is expected to propel the growth of the market for electric toothbrush in the region. 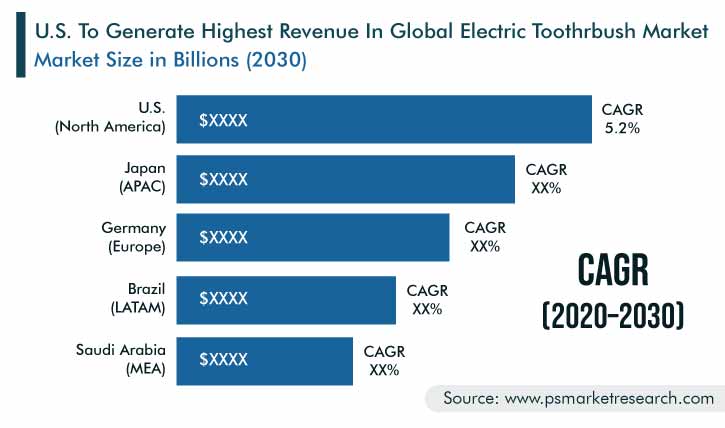 The integration of advanced technologies in toothbrushes is the latest trend being observed in the electric toothbrush market. In recent times, many leading smart toothbrush manufacturers have introduced artificial intelligence (AI)-enabled smart electric toothbrushes to improve the plaque removal process during brushing. An AI system with a large (of some thousand rows) dataset, including information on brushing styles and the ideal parameters (i.e. the amount of applied pressure) for a specific brushing style, is integrated into a smart toothbrush. 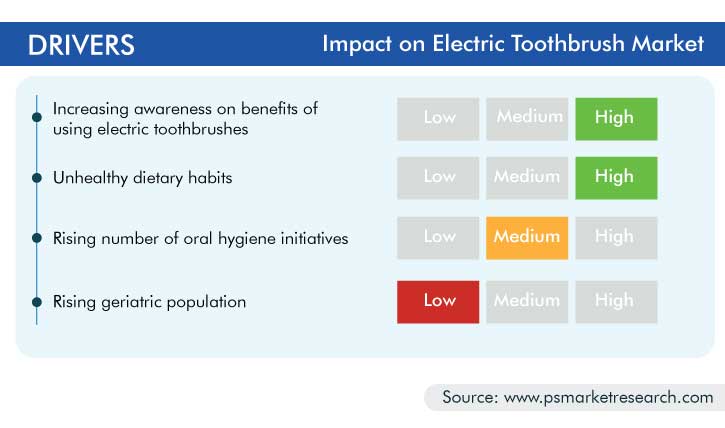 The rise in the awareness on the benefits of using smart toothbrushes is one of the key drivers of the market for electric toothbrush. Various studies have suggested that these toothbrushes are more effective than manual toothbrushes. For instance, in May 2019, a study, titled Long‐term impact of powered toothbrush on oral health: 11‐year cohort study, was published in the Journal of Clinical Periodontology, which suggested that the use of such toothbrushes resulted in 22% less gum recession, 17.7% less progression in decayed, missing, filled surfaces (DMFS), and 19.5% increase in the number of teeth retained than manual toothbrushes, over the period of the study.

Unhealthy dietary habits include the high consumption of sugary foods, chewing of tobacco, and intake of alcohol, which can cause detrimental effects on the human body. These conditions play a pivotal role in the growth of the electric toothbrush market, by increasing the demand for smart brushes. For instance, according to the IDF Diabetes Atlas 2019, the global prevalence of diabetes in the 20–79 age group was around 463 million. Sugary diet and alcohol (apart from damaging the liver) contain high amounts of sugar, which, on coming in contact with the plaque, converts to acid, which destroys the teeth over time. Similarly, tobacco products irritate the gum tissues, causing the gums to loosen their hold on the teeth.

The global electric toothbrush market is consolidated in nature, with the presence of major market players such as Koninklijke Philips N.V., The Procter & Gamble Company, and Colgate-Palmolive Company. In recent years, players in the industry have launched a number of new and advanced products in order to stay ahead of their competitors. For instance: 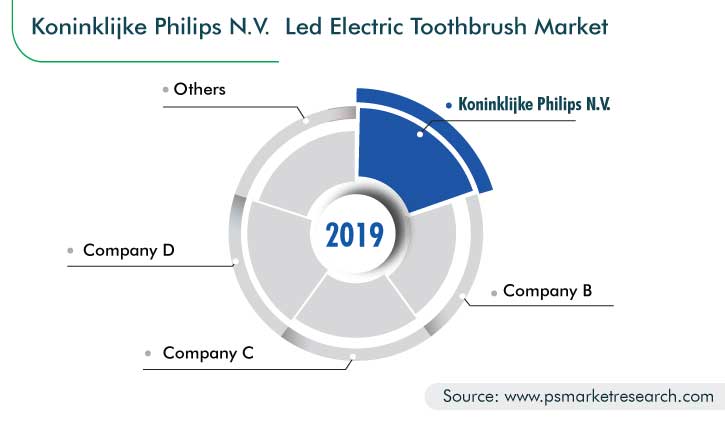 Some of the key players covered in the electric toothbrush industry report include:

The research offers market size of the global electric toothbrush market for the period 2014–2030.

Based on Head Movement

Frequently Asked Questions About This Report
What is the growth potential of the electric toothbrush market?+

Which distribution channel will drive the electric toothbrush industry?+

The electric toothbrush industry will be driven by hypermarkets/supermarkets.

What is the latest trend in the electric toothbrush market?+

The latest trend in the electric toothbrush market is the integration of advanced technologies in such consumer products.

How does alcohol consumption impact the electric toothbrush industry?+

Alcohol consumption impacts the electric toothbrush market positively, by leading to the sugar-induced destruction of teeth over time.

Who are the major players in the electric toothbrush market?+

The major companies in the electric toothbrush market are The Procter & Gamble Company, Koninklijke Philips N.V., and Colgate-Palmolive Company.