The Asia-Pacific (APAC) region is expected to exhibit the fastest growth in the sales of lead–acid batteries in the coming years due to the robust growth of the automobile sector and rapid deployment of 4G telecom towers across the region. The large-scale deployment of 4G telecom towers will result in a high demand for uninterruptible power supply (UPS), which will further amplify the sales of lead–acid batteries in APAC. 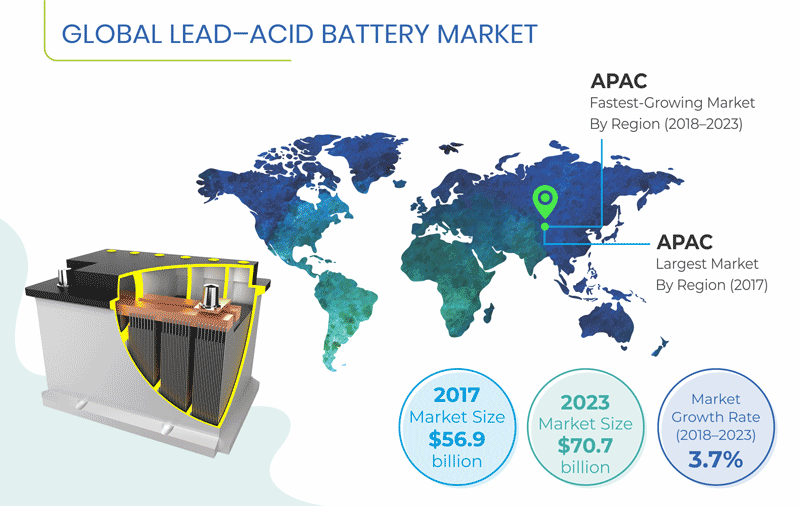 The rising number of technological advancements in these energy storage devices has become a key trend in the lead–acid battery industry. These batteries are utilized in high volumes due to their compatibility with a wide range of consumer electronics. In recent years, market players have started manufacturing high-performance batteries to overcome the technological limitations of conventional lead–acid batteries. For instance, the Commonwealth Scientific and Industrial Research Organization (CSIRO) of Australia has developed a hybrid energy storage device, named Ultra Battery.

The rising penetration of battery electric vehicles (BEVs) and hybrid electric vehicles (HEVs) is steering the lead–acid battery market growth across the world. The clean and efficient transportation enabled by EVs and HEVs has led to a high demand for them. Various EV manufacturers, including Ford Motor Company, Tesla Inc., and Nissan Motor Corporation, are planning to introduce new models in the foreseeable future. Lead–acid batteries are used as the primary source of power in EVs owing to their high energy density and specific energy.

The surging inclination toward non-conventional sources of energy is expected to provide ample growth opportunities to the market players. All European Union (EU) nations have implemented national renewable energy action plans, which has resulted in the large-scale installation of onshore and offshore green energy plants in the U.K., Italy, Germany, and Sweden. These installations need batteries, primarily lead–acid variants, to store solar energy. 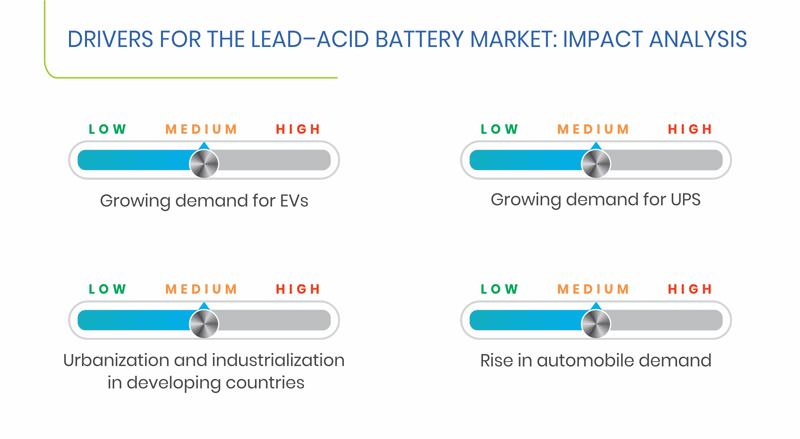 In 2017, the flooded category held the larger share, in terms of value, under the construction segment. This can be owed to the surging demand for a cost-effective solution for entry-level start–stop systems and booming demand for flooded batteries in marine applications owing to their higher power output.

The starting, lighting, and ignition (SLI) category held the largest revenue share in the lead–acid battery market in 2017, within the type segment. This was because of the increasing preference for SLI batteries in the automotive sector owing to their high durability and reliability, low cost, and low maintenance requirements.

In the coming years, the oil and gas category will demonstrate the highest revenue CAGR within the application segment. This can be attributed to the increasing adoption of energy storage devices and surging requirement for UPSs in the oil and gas industry owing to a rise in exploration and production (E&P) activities.

The APAC market for lead–acid batteries generated the highest revenue between 2013 and 2017, and it is expected to retain its dominance in the coming years. This can be ascribed to the flourishing automotive industry in China and India on account of the soaring income here.

Furthermore, the region is projected to exhibit the fastest growth in the coming years on account of the rising adoption of energy storage systems and mushrooming usage of UPSs in the oil and gas, healthcare, chemical, and manufacturing sectors. China is expected to dominate the APAC lead–acid battery market, with revenue of $15.3 billion, in 2023. 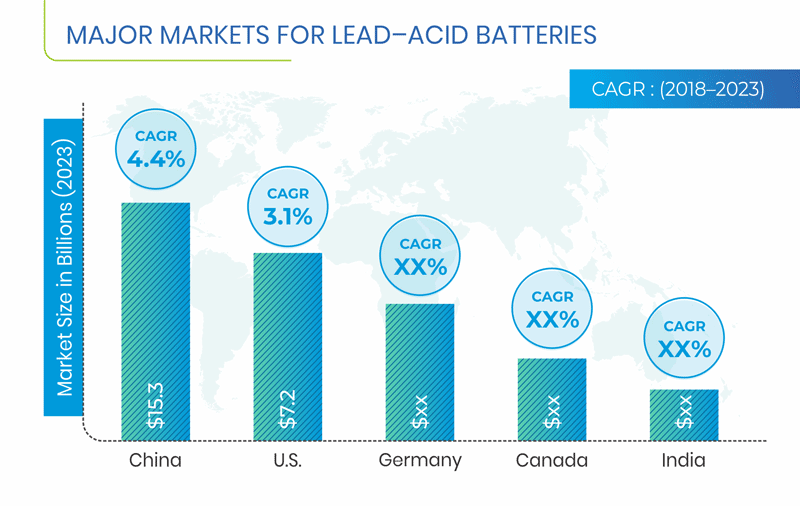 The lead-acid battery market is consolidated in nature, characterized by the presence of established companies, such as Johnson Controls International plc, GS Yuasa Corporation, Exide Technologies, and EnergySys Limited.

In recent years, the major players in the lead-acid battery market have taken several strategic measures, such as product launches and geographical expansions, to gain a competitive edge in the industry. For instance, in October 2017, Panasonic Corporation launched lead–acid batteries for EVs, at its former television screen plant, in Japan. Panasonic Corporation, the exclusive battery cell supplier for Tesla Inc.'s mass-market Model 3, is reinventing itself as a provider of advanced auto parts to reduce the dependence on smartphones and other lower-margin consumer products, which face a stiff price competition. With this launch, the company aims to expand its lead–acid battery product line.

Moreover, in April 2018, AC Delco Corporation expanded its service center network in Dubai, for the Middle East and African region, where it is widening its customer base and service offerings.