The growing demand of two-wheelers in B2B services such as scooter sharing, hailing, and last mile transportation coupled with booming electric three-wheeler (rickshaw sales) for passenger and load carrying have provided opportunities for battery-swapping niches to emerge. Asia-Pacific (APAC) is a hub for electric two-wheelers and three-wheelers, which are used mostly for passenger carriage, especially for last-mile transportation. However, the lack of adequate charging facilities is a major problem for most electric two-wheeler and three-wheeler owners. Furthermore, the majority of the drivers of these vehicles charge the vehicles twice a day, since a single charge is not sufficient to run them throughout the day. Charging these vehicles in the daytime, for two to three hours during peak business hours, results in a loss of income.

The adoption of battery swapping improves the prospects for drivers’ earnings. EVs using advanced batteries, which support swapping, have been known to run 25% longer as compared to the conventionally charged vehicles and 50% longer as compared to lead–acid battery vehicles. Thus, the longer run time and improved prospects for shared e-mobility services act as the key factors propelling the growth of the EV battery swapping for two- and three-wheeler market.

COVID-19’s rapid spread has had a significant impact on the global automotive industry, with a downturn in the demand for new and old vehicles. The impact of the current global economic conditions and market sentiment directly affects the business of key players. The electric three-wheeler segment is hit hard by this pandemic, as these automobiles are mostly used in shared mobility. Industry experts believe that post the pandemic, last-mile conveyance will shift toward personal mobility, and the electric two-wheeler segment will be largely unaffected. However, during and after the COVID-19 crisis, it has been highly speculated that the governments will alter their priorities, the focus too may divert toward more pressing social and economic issues, and the support for EV swapping stations will be limited. 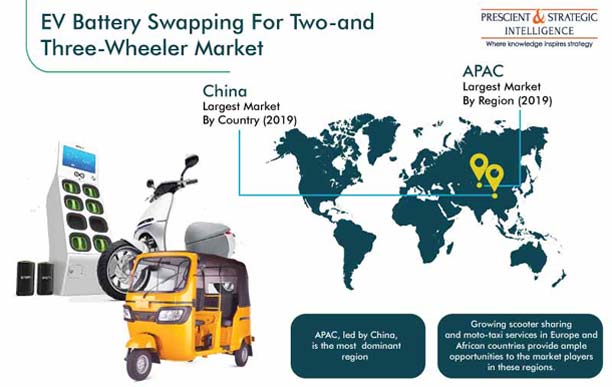 The EV battery swapping for two- and three-wheeler market is expected to witness the faster growth in the Li-ion bifurcation, on the basis of battery type, as Li-ion is being considered the technology of the future. Li-ion-battery-based two-wheelers constituted 65% of total EV sales in APAC, 97% of the total sales in Europe, and 92% of the total sales in North America in 2019. Furthermore, in the coming five years, almost all the two-wheelers sold around the globe will be Li-ion-battery-based. The government support for Li-ion-battery-based low-speed electric vehicles in major markets, such as China and India, is also expected to support the growth of this bifurcation in the coming years.

Based on vehicle type, the market has been bifurcated into two-wheelers and three-wheelers. Of these, two-wheelers dominated the global market in 2019, and they are expected to continue to dominate it during the forecast period. This is mainly due to two-wheeler manufacturers’ surging focus on the adoption of the battery swapping technology in their models, to provide users with a convenient ride, without worrying about the range and charging infrastructure unavailability. The successful adoption of this technology in the densely populated cities of china has given a boost to the battery swapping concept for two-wheelers. Moreover, service launches by the key players are further expected to drive the category’s market.

Globally, APAC, led by China, is the dominant region in the EV battery swapping for two- and three-wheeler market. China and India are the two biggest markets for electric two and three-wheelers in the world. The successful adoption of the battery swapping concept in Taiwan has given a boost to the market in the region. Furthermore, the high population density in major cities, coupled with the huge two-wheeler user base, is benefitting the market in the region.

The RoW region (specifically Africa) and Europe are two of the fastest-growing markets for EV battery swapping for two- and three-wheelers. The popularity of B2B services, specially moto-taxi, and ongoing developments in and adoption of battery swapping in Africa and growing scooter and kick scooter sharing businesses in Europe are the major factors supporting the growth of the market in these two regions. 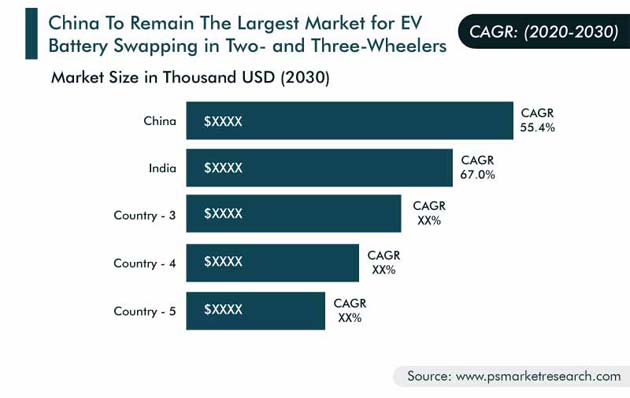 One of the major technological trends being witnessed in the global EV battery swapping for two- and three-wheeler market is the use of robotic systems for the purpose, in order to automate the procedure. The robotic technology can swap an EV battery in a bit more than 2 minutes, thus saving time and ensuring continuous mobility. Moreover, this technology is optimum for light and small electric vehicles, such as two- and three-wheelers.

The popularity of EVs has risen over the years, as they are more efficient and eco-friendly. Subsidies have also helped the market, by making electric scooters and motorcycles more viable for the customers in developing countries, such as India. Some of the supportive initiatives for the buyers of electric vehicles are tax exemptions, purchase rebates, and financial incentives. For instance, Government of India has taken the initiative to encourage the adoption of alternative-fuel vehicles by introducing the FAME-2 scheme. Furthermore, the permission for the registration of vehicles without pre-fit batteries will further help the market grow.

The EV battery swapping for two- and three-wheeler market is consolidated, with the presence of few global and local unorganized domestic players. In recent years, the major players in the market have taken several strategic measures, such as product launches, partnerships, and facility expansions, to gain a competitive edge in the market.

In January 2020, Fika Mobility announced the EV battery swapping model for the Kenyan market. The Fikam electric motorcycles cost between $1,000 and $1,200 (KES 100,000 and KES 120,000). There has been an upsurge in the usage of boda bodas in major Kenyan cities and towns, as they promise fast navigation through traffic and offer economical solutions for ferrying passengers in remote areas inaccessible by other vehicles. The company also launched - the FIKA model, works as a battery rental marketplace, allow for swapping, when the charge runs low.

In April 2018, SUN Mobility Pvt. Ltd. launched a swappable battery station for two- and three-wheeler EVs at its newly developed 47,500-sq. ft. technology development center in Bengaluru, India. The platform enables electric two- and three-wheelers to be cost-neutral versus conventional diesel/petrol ones. The solution, to be offered in collaboration with multiple OEMs and solution providers, will support a range of new models as well as retrofit applications.

The Key Players in the EV Battery Swapping for Two- and Three-Wheeler Market include:

The research offers market size of the Global EV Battery Swapping for Two- and Three-Wheeler for the period 2014–2030.