The global electric vehicle battery swapping market was valued at ~$150 million in 2020. The popularity of electric vehicles (EVs) is being fueled by the rising levels of pollution in many countries. Additionally, the availability of appropriate charging infrastructure is critical to the widespread adoption of EVs. The ease of access to such infrastructure alleviates the anxiety related to EVs’ limited range. In this respect, the battery swapping technology is a viable alternative for supplying power to vehicles, as it eliminates the need for slow-charging stations.

The COVID-19 pandemic’s fast spread had a major impact on the automotive industry, including EV sales. In the short term, this resulted in a decrease in the demand for EVs. The industry's growth has been hampered by the shutdown of plants, as well as the lower use and sales of equipment during the lockdowns. With conditions returning to normal and automakers resuming operations, the demand for EVs is expected to pick up and drive the EV battery swapping market growth. 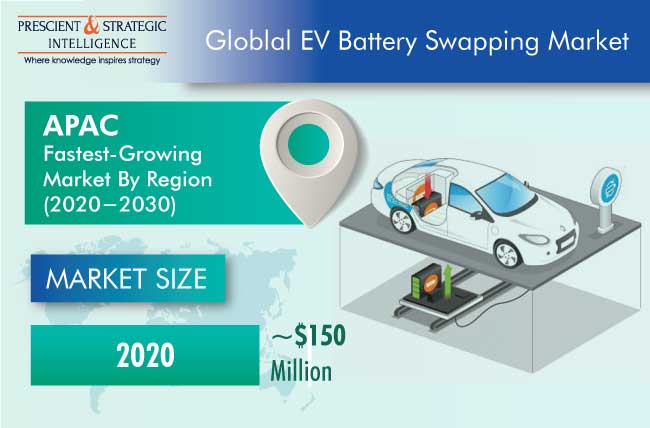 The pay-per-use category was the larger share holder in the electric vehicle battery swapping market in 2020, and it is expected to continue to do so during the forecast period, on the basis of service type. This will be due to drivers' choice to pay according to their usage, due to the absence of a fixed driving pattern. For instance, a short-distance commute does not necessitate frequent battery swaps, which is why the majority of the drivers are likely to choose the pay-per-use model.

Electric two-wheelers are expected to dominate the market for EV battery swapping in 2030, on the basis of vehicle type, because they travel more than 100 kilometers per day, on average. As a result, they must be charged twice or three times a day. The best alternative to slow charging is the battery swapping technology, which allows drivers to make the most of their operational hours.

Globally, APAC is expected to grow with the highest CAGR in the global EV battery swapping market during the forecast period. Government policies to facilitate the adoption of EVs, as well as a growing inclination in research and development (R&D) to improve the available technologies, are driving the market growth in APAC.

The APAC region has numerous developing economies with significant natural and human resources, with China and India expected to be major investment hotspots for battery companies in the coming years as a result of the government support to the manufacturing industry. Essentially, the electric vehicle battery swapping market will experience rapid growth in the coming years owing to the increasing deployment of electric two- and three-wheelers, as well as the rising demand for battery swapping due to a lack of adequate charging infrastructure and high lithium-ion battery prices. 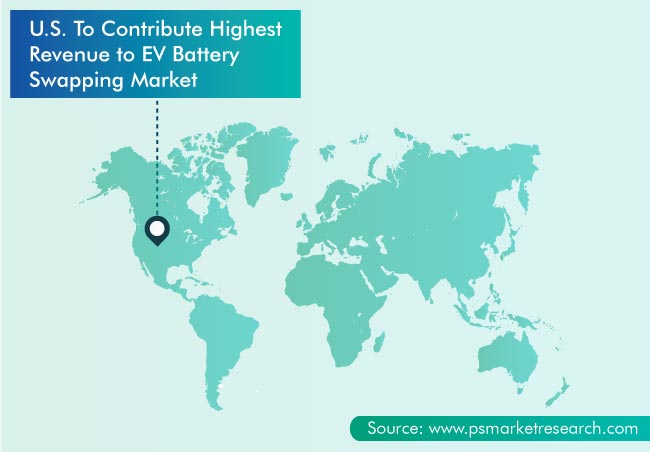 The introduction of swappable batteries allows the driver to replace the discharged battery with a charged one at a dedicated swapping center. This, in turn, increases the vehicle’s uptime substantially, while also reducing the operational costs, which will ultimately take the EV industry toward profitability. Furthermore, the expansion of the EV charging infrastructure, aided by the deployment targets for charging and battery swapping stations, enactment of legislations, and provision of financial assistance, are some of the factors affecting the scenario in a positive way. Essentially, the rising EV sales are driving the demand for EV charging and battery swapping stations, thus attracting major investments. Apart from this, the falling battery prices and improving technology are expected to enable automakers to offer cost-competitive EVs, thus resulting in the increasing demand for battery swapping technologies.

The key factor driving the development of the electric vehicle battery swapping market is the rising requirement for minimal wait time for EV charging. The charging time is a critical factor in the adoption of EVs, particularly in long-haul applications. The majority of the EVs around the world use a slow charge system to recharge the battery overnight, which can take up to eight hours. The swapping process significantly reduces the battery charging time to under three minutes, which enhances the operational duration of the EV.

Additionally, the battery accounts for 35% to 45% of the total cost of an EV. As a result, an EV without a battery costs less than or equal to an internal combustion engine (ICE) vehicle, thus driving the EV battery swapping market growth.

In recent years, major players in the market have been actively involved in facility expansions in order to make the most of this new technology. For instance,

Frequently Asked Questions About This Report
How much value did the global EV battery swapping market attain in 2020?+

The global EV battery swapping market attained a value of ~$150 million in 2020.

How did the COVID-19 pandemic hamper the growth of the EV battery swapping market?+

The COVID-19 pandemic hampered the progress of the EV battery swapping industry by causing the imposition of lockdowns, which led to the shutdown of EV manufacturing facilities.

Which was the larger service category in the EV battery swapping industry in 2020?+

The pay-per-use category was the larger service category in the EV battery swapping industry in 2020.

Why is the EV battery swapping industry expanding rapidly in Asia-Pacific?+

The market for EV battery swapping is surging rapidly in Asia-Pacific because of the implementation of favorable government policies regarding the adoption of EVs in the region.

What is the major trend in the market for EV battery swapping?+

Rapid technological advancements are currently trending in the market for EV battery swapping.