The data center power generators market size stood at $5,097.1 million in 2021, and it is expected to rise at a growth rate of 5.9% during 2021–2030. The market growth is supported by the booming production of customized generators and escalating fabrication of new data centers due to the growing demand for data storage among large organizations, globally. These facilities have been witnessing an increase in their number due to the commercialization of the 5G technology and the elevating adoption of IoT. As a result, various colocation service providers are laying emphasis on the construction of data centers.

Data centers need high power reliability; therefore, the significance of power backup equipment is high, which strengthens the use case for generators, as they are cost-effective, provided they are maintained regularly. Large data centers use more power due to their more-expansive infrastructure and intricate networking and storage, which create a strong need for efficient power handling and monitoring solutions. 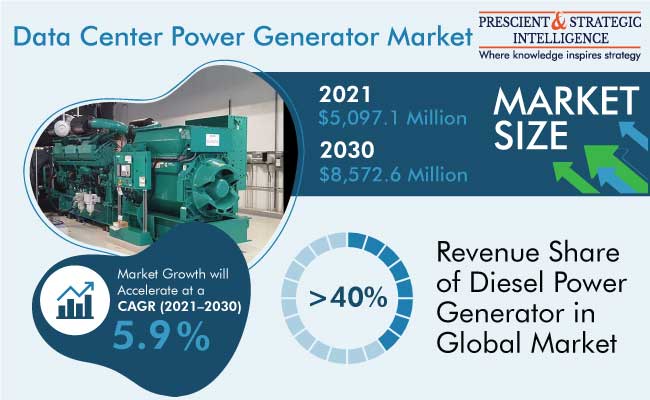 Further, large-scale industries and enterprises with high-density cloud computing systems are highly dependent on large data centers, as they provide consistency in power supply and effective data protection. This has fortified the demand for generators in data centers across the globe. Apart from this, there is a significant rise in the establishment of hyperscale facilities and inflation in the use of the diesel rotary uninterruptible power supply (DRUPS) systems.

As of 2021, the DRUPS category is projected to witness the highest CAGR of 7.3%, during the forecast period, followed by gas gensets and diesel gensets in the data center power generators market. This is primarily attributed to the rising adoption of these generators as they are equipped with both the battery and flywheel UPS topology, to provide backup energy during power outages.

The tier III category dominated the market, with $2,606.0 million revenue, in 2021, and it is expected to witness the same trend in the coming years. This will primarily be because of the majority of data centers are designed to tier III standards. Moreover, several under-developed projects across the Southeast Asia region fall under this category. Tier III centers outnumber tier II and tier IV-certified data centers, which, in turn, strengthen the market growth. 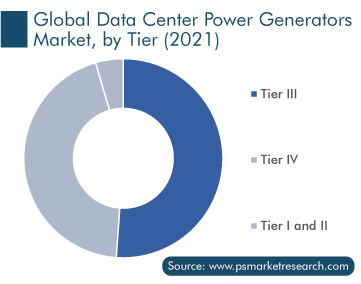 Generators with a 0–1.5MW power capacity will record the highest CAGR, of 7.6%, during the forecast period. The construction of data storage and management facilities with a power requirement of <5 MW is expected to drive the procurement of generators with a capacity of 0–1.5 MW. In 2021, around 300 new/expanded data centers had a power requirement of <5 MW.

In 2021, North America held the largest revenue share in the data center power generators market. This is ascribed to the presence of major market players, such as Cummins Inc., Caterpillar Inc., and Generac Holdings Inc., in the region and expansions of data center facilities. Moreover, the rapid technological development and awareness about advanced technologies are expected to have a positive impact on the market.

Moreover, APAC is projected to be the fastest-growing region in the coming years, ultimately reaching $2,772.1 million revenue in 2030, owing to the increasing investments by global and regional facility operators and the rising adoption of advanced technologies, including IoT, public cloud, and hybrid cloud, by various organizations. Amazon Web Services Inc., Google LLC, Baidu Inc., Alibaba Group Holding Limited, Microsoft Corporation, and Apple Inc. are some of the major investors in the regional market. 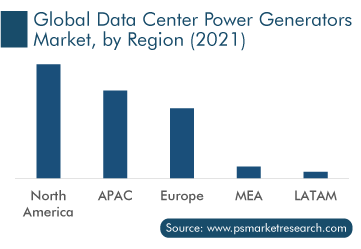 Several companies are focusing on making investments in the construction of data centers globally, which, in turn, strengthens the data center power generators market. For instance, in April 2022, Google LLC announced that it is planning to invest $9.5 billion in setting up data centers and offices in the U.S.

Additionally, in September 2019, the company had invested $3.3 billion to expand its data center presence across Europe.

Similarly, in September 2020, Japanese technology firm Nippon Telegraph and Telephone Group announced an investment of $2.0 billion over the next four years to expand its data center business in India.

COVID-19 forced countries to implement lockdowns during the first half of 2020. Stringent guidelines were issued by governments and local authorities, and all non-essential operations were halted. The production and supply chain disruptions were also exasperated during the second quarter, which posed a challenge to generator manufacturers and dealers.

However, data centers played a crucial role in the pandemic owing to the substantial growth in data creation, collection, and consumption by numerous companies, institutions, government organizations, and individuals, which, in turn, fueled the demand for data storage. This further stimulated the usage of data centers as well as the use of generators. Further, owing to the growing digitization and increment in the number of work-from-home jobs, several data centers enhanced their equipment, which had a positive influence on the use of generators.

The research offers the market size of the global data center power generator set market for the period 2017–2030.

Frequently Asked Questions About This Report
What is the data center power generators market growth potential?+

What is the fastest-growing power capacity category in the data center power generators market?+

0–1.5 MW is the fastest-growing category in the power capacity segment of the market for data center power generators.

Which is the largest region in the data center power generators industry?+

What is the key winning strategy in the data center power generators market?+

Client Wins is the preferred strategy among players in the market for data center power generators.