The global data center market size was estimated at $220.0 billion in 2021, globally. This market number is expected to increase with a CAGR of 5.1%, to reach $343.6 billion in 2030. The exponential increase in data is the major factor that contributes to the growth of the market. Therefore, the demand for these centers is burgeoning due to the rising need for social, mobile, analytics, and cloud services around the world. In the recent past, the use of social media platforms has exploded, causing the construction of new centers to store the gathered information. 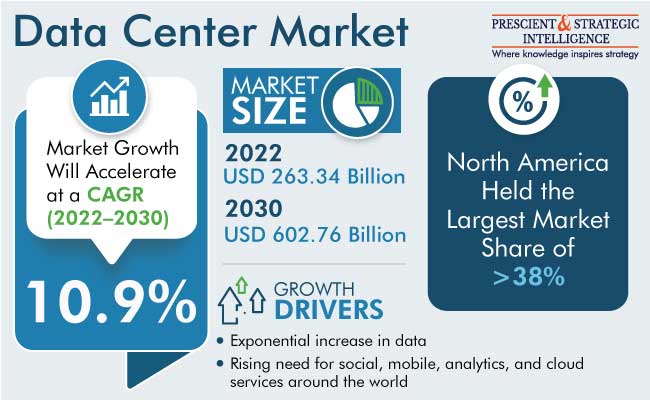 There are several government initiatives that are playing a crucial role in the growth of the market. For instance,

Hyperscale Data Centers – The Future of IT Industry?

As a result of the pandemic, cloud adoption is accelerating at a rapid pace. The IT sector has been colocating to hyperscale data centers, to enable better data management, having realized the dynamism of what can be done with data. Colocation has surged to the top of the queue for organizations all around the world when it comes to their IT infrastructure needs. Realizing the need for an efficient center to reduce barriers for customers and for higher margins, data storage and management, higher security, and reliability, IT companies are moving toward hyperscale data centers.

IT Infrastructure Is Dominating Market

IT infrastructure is the highest revenue contributor in the market as it comprises server, storage, and network infrastructure, which is the backbone of such facilities. The demand for it will further grow in the future with around 5% CAGR, to maintain its position in the market. Nowadays, businesses are shifting from their existing resources to well-equipped data centers to enable better data management, as data analysis has become central to business growth as well as public good. In this regard, the concerns related to the efficient storage and privacy of data continue to propel the setup of IT infrastructure.

The number of mergers and acquisitions in the industry has increased significantly in the last few years. Multi-billion-dollar acquisition deals are common in the world of technology. In addition, 2020 was a record-breaking year for M&A in the industry, with more than $31 billion spent across more than 110 deals, which was double the figure of 2019. The rising demand for data center capacity has fueled another round of big-ticket mergers and acquisitions, which has led to a fresh wave of private equity cash flow into the sector, while also helping fund the growth of advanced centers in developing countries.

For instance, in March 2022, Kohlberg Kravis Roberts & Co. L.P. (KKR) and Global Infrastructure Partners (GIP) announced the acquisition of all the outstanding shares of CyrusOne Inc. common stock for $90.50 per share, in an all-cash transaction valued at approximately $15 billion, including debt assumption. Similarly, in December 2021, American Tower Corporation acquired CoreSite Realty Corporation through a merger of one of its wholly owned subsidiaries with and into CoreSite Realty Corporation, for approximately $10.1 billion.

The IT and telecom industry is predicted to dominate the global data center market in the coming years. Because of the rapid adoption of advanced technologies, such as the internet of things (IoT), cloud computing, and artificial intelligence (AI), huge volumes of data are being generated. This data comes from mobile internet usage, personnel records, network equipment, server logs, billing activities, and social networks. To store such huge amounts of data, companies operating in the IT and telecom sector are renting such third-party spaces. These solutions allow IT and telecom companies to securely manage and store large volumes of data and scale up the storage capacity as per their requirements. Thus, the industry accounted for more than 50% of the revenue in this market in 2021.

The rapidly increasing data generation is one of the major factors for the growth of the data center market. In 2020, 64.2 zettabytes of data was created, which was a 314% increase from 2015. Industry experts predict that by 2025, nearly 10 times more data will be generated than that produced in 2017. Moreover, around 2.5 quintillion bytes of data is being generated every day, globally. With the advent of IoT and the high adoption of social media platforms, approximately 90% of the data in the world was produced within the past four to five years.

The growth in data generation is primarily led by a huge volume of metadata created by machine-to-machine, embedded, and IoT devices. Other factors include video and image creation, consumption of content for entertainment and functional applications, such as security and advertising; and productivity-driven data, such as log files on computer systems and servers. Businesses use this information to improve their products and services, maintain customer relations, and increase profitability.

The North American data center market was the largest contributor, with over 40% of the market share, in the year 2021. Additionally, the region will grow with a CAGR of approximately 3%. The U.S. has over 2,600 such centers, many of these in northern California, where many IT firms, such as Google, Facebook, Uber, Twitter, and Yelp, are headquartered. North America also has highly advanced, extensive, and efficient technological infrastructure.

Furthermore, the region's investment in research and development is quite strong, which will lead to the establishment of next-generation centers that are more technologically advanced and efficient in terms of managing information. It is also home to multiple data center infrastructure providers, which is a major contributor to the region's rapid expansion and market share.

The COVID-19 pandemic has contributed to the strong uptick in initiatives and investments in this industry across the globe. Furthermore, the adoption of cloud-based services by government agencies, as well as of online learning and contactless payments, helped the market grow. Therefore, during the pandemic, the number of data management centers increased globally. For instance, in 2021, there were nearly 8,000 such centers around the world. Six countries—the U.S. (33%), the U.K. (5.7%), Germany (5.5%), China (5.2%), Canada (3.3%), and the Netherlands (3.4%)—had the majority of them.

Players in the global data center market are engaged in launching advanced hardware and software components. For instance;

Based on Infrastructure Type

Frequently Asked Questions About This Report
What is the expected size of the data center market in 2030?+

In 2030, the market for data center infrastructure will value $343.6 billion.

What kind of infrastructure is demanded the most in the data center industry?+

The highest data center industry revenue is generated by IT infrastructure.

How did COVID-19 impact the data center market?+

The pandemic positively impacted the market for data centers by impelling governments to invest in the setup of such facilities to allow for remote working and data-driven population health management.

Why does North America dominate the data center industry?+

The dominance of North America on the data center industry is due to the advanced IT infrastructure and presence of numerous hardware and software providers here.

What are data center market players doing for business expansion?+

Players in the market for data center infrastructure are launching newer IT, electrical, and HVAC components.