The global cloud gaming market size was $4,500.7 million in 2021, and it will grow at a CAGR of 42.8% during 2021–2030. Cloud gaming's growing popularity, combined with the introduction of enhanced, cross-platform gameplays, is expected to drive the market growth.

Moreover, the rising penetration of the internet, as well as the easy access to cloud-based games, are contributing to the rising demand for them. Furthermore, 5G provides higher bandwidths and lower latency, allowing gamers to stream XR games seamlessly. Additionally, the growing adoption of smartphones is expected to augment the market growth globally. 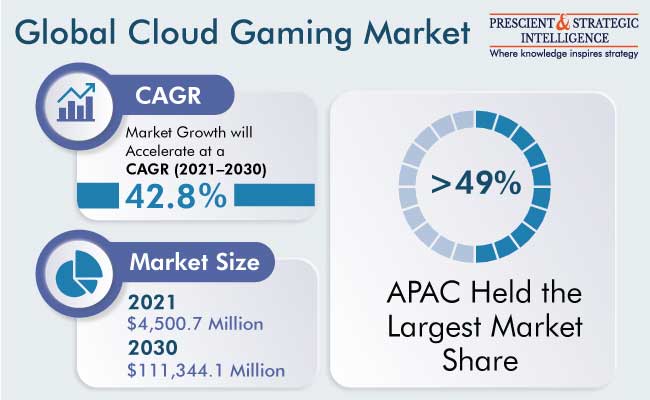 With the launch of 5G services in multiple countries, cloud gaming firms are expected to leverage mobile ubiquity and fast 5G connections to provide AAA-quality gaming to smartphone users. Cloud games from game publishers and rising number of mobile network operators will also drive the growth of the market globally.

The increasing popularity of social media games is also expected to boost the market growth. A substantial chunk of the global populace plays games on social networking sites, including Instagram, Facebook, and Reddit. Furthermore, cloud gaming allows users to access games through remote servers instead of having to install them on a computer or console, thus eliminating the need for storage and to purchase the most-recent gaming PC or console.

In addition, with this, cloud gaming provides higher speed, improved user insights, and scalability. It also aids in the restructuring of content on a variety of smart devices, in turn, improving the delivery of content across all media.

During pandemic times, the cloud gaming user base grew as it offered one of the best entertainment options for people confined in their homes. There has been a substantial increase in the number of downloads of various applications, as well as the amount of time spent in playing online games. Furthermore, as a result of COVID-19, the market has seen an upsurge in the number of smaller services venturing into cloud gaming, especially in the mature markets. While these services are on a smaller scale, they increase the number of consumers who have access to cloud gaming.

For instance, in May 2021, India-based ATechnos launched GoGames.Run, a premium cloud gaming as a service platform. It has over 500 games under categories such as board, casual, action, arcade, sports, and mystery, including amplified and VR games with more-realistic and intense action, for users of all ages. Therefore, even in post-COVID-19 times, the market is growing with a rapid pace.

Based on device, the smartphones category is the highest revenue generator in the market, accounting for approximately $1,645.6 million revenue in 2021, which is projected to grow at a CAGR of around 43% during the forecast period. This is attributed to the steady surge in mobile gaming activities in the last five years because of its cost-effectiveness. Moreover, it is preferred as it is way expensive to continuously upgrade PCs and consoles to uphold the game performance.

Furthermore, the surge in the demand for mobile games is a direct result of the numerous technological advancements in cloud gaming, such as the introduction of AR, VR, and 5G. The launch of 5G networks and the emergence of unlimited data plans are the prime factors assisting the success of cloud gaming across the globe, as maximum gamers today prefer playing games on their mobile devices, rather than PCs or tablets. 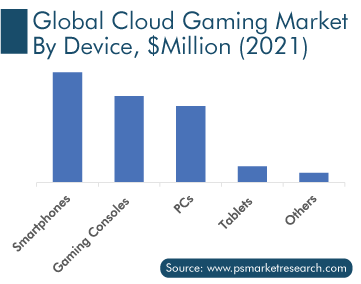 In 2021, the video streaming category dominated the market with a share of more than 62%. Video streaming is becoming popular as it helps in eliminating the need for additional hardware devices. Furthermore, video streaming services enable users to access and play games from any platform and from any location, via the internet, with reduced latency. Vendors have increased their focus on developing platforms that provide a better gaming experience, thereby driving the cloud gaming market on a global level. Furthermore, many key players, such as Shadow, GeForce Now, LiquidSky, and Vortex, are supporting video streaming games.

Concurrent with the cloud industry, the market is characterized by high investments by key industry stakeholders. For instance, in March 2021, Tencent and Sony, along with Square Enix, invested in Ubitus to enhance its cloud gaming technology. 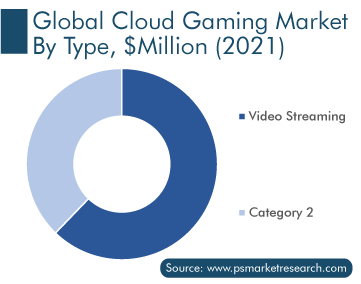 APAC dominated the market, with a share of over 49%, in 2021. The increasing smartphone penetration and rising demand for entertainment are expected to drive the market growth in the region. This is complemented by the introduction of new gaming genres, escalating disposable income, and rising young population.

Japan, China, and India are among the major contributors to the global gaming market. These countries’ gaming market is evolving owing to the rapid evolution of technologies and presence of many key gaming companies, such as Konami, Sony, and Nintendo, who have been household names for decades.

To Increase Market Share, Companies Have Been Involved in Product Launches, Partnerships, and Acquisitions

The global cloud gaming market has several players, who are launching new products, acquiring similar companies, and entering into partnerships, in order to stay ahead of their competitors. For instance:

Frequently Asked Questions About This Report
How big is the cloud gaming industry?+

Who is leading the cloud gaming market?+

Does cloud gaming have a future?+

Yes, cloud gaming has a prosperous future, especially with the advent of AR, VR, and 5G technologies.

Which region witnesses the highest demand for cloud gaming?+

What are the opportunities for cloud gaming market players?+

Players in the market for cloud games can leverage the shift of people from laptops, PCs, and gaming consoles to smartphones and video streaming services.