In 2014, the global wax market stood at $7,939.6 million which is projected to witness a prominent growth at a CAGR of 3.5% during the forecast period. This growth is ascribed to the factors including the growth in the base of end-user industries followed by the rise in demand of natural waxes.

Waxes are majorly organic compounds which can have properties like malleability at room temperature and become low viscous or free-flowing fluid at higher temperature. Their chemical compositions are very complex, as they are mixtures of fatty acids and heavy hydrocarbons combined with esters. In addition, waxes have several categorizations, based on their properties, including viscosity, hardness, melting point, colour, and others. And, waxes are used for several functions, including dispersing agent and binder, viscosity regulation, surface treatment and emulsifier, moisture control, and extrudability & moldability. Major chunk of wax produces from crude oil, natural gas, lignite, animals, insects, and vegetables. 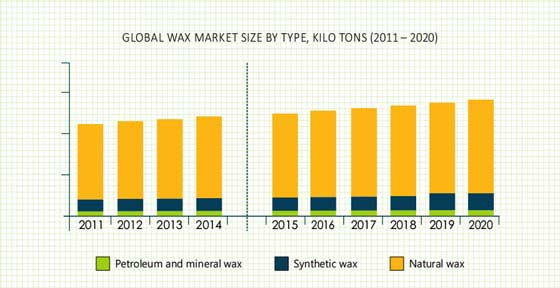 Based on the type of wax, synthetic wax is anticipated to witness the highest growth (4.9% CAGR) in terms of value during the forecast period, in the global market of wax. Within the synthetic wax type, GTL wax has shown the highest growth rate in the historical period among all synthetic wax types in the global market. GTL wax is produced during the process of natural gas conversion into liquid fuel. GTL wax is produced by Fischer-Tropsch process, which involves the conversion of syngas into paraffinic compounds, such as wax.

In addition to that, the candles segment accounted for the largest demand generating application with 1,976.5 kilotons volume in 2014 which is anticipated to reach 2,321.4 kilotons by 2020, with a CAGR of 2.7% during the period forecast period. Further, Asia-Pacific (APAC) held the largest market share in the global market by accounting for the consumption of 1,579.6 kilotons in 2014, followed by the North American wax market which valued at $2,467.9 million in 2014.

The increase in the demand for natural wax and large scale of end-use industries are impacting the growth of the wax market positively. The demand for animal and vegetable waxes in the healthcare and cosmetic industries, is continuously growing owing to various advantages of waxes, such as renewability, sustainability, biodegradability, petroleum free content, high melting point, and other eco-friendly attributes. Further, the close down of Group-I base oil refineries in several countries has been tightened the wax supply globally, which is restraining the growth in the wax demand globally.