The global paints and coatings market was valued at $151,399.4 million in 2020, and it is expected to grow at a CAGR of 5.8% during 2020–2030. The key factors responsible for the growth of the market include the growing construction industry, increasing demand for automobiles, surging demand for paints and coatings from the oil and gas industry, and increasing consumer spending.

The market for paints and coatings is highly backward-integrated with the petrochemical feedstock and titanium dioxide industries and forward-integrated with the residential, commercial, and industrial sectors. Since the pandemic led to a temporary halt in commercial construction and industrial production, the requirement for paints and coatings reduced. Further, as per the International Energy Agency (IEA), the global oil demand fell in the year 2020 due to the COVID-induced shock and a shift in the momentum toward investments in clean energy. Thus, the crude oil supply–demand imbalance and its future uncertainty have impacted the market negatively. 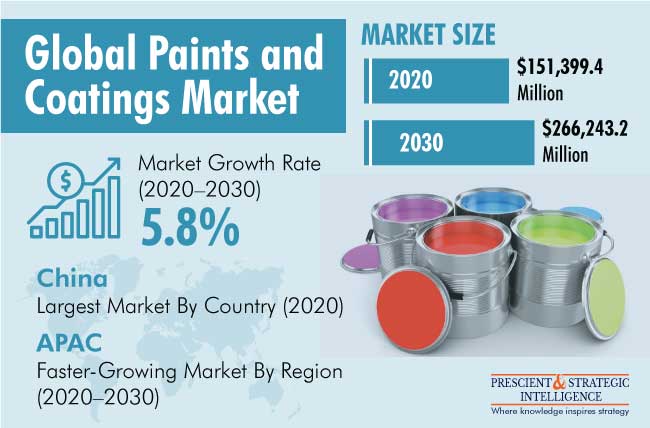 The acrylic category accounted for the larger share in the paints and coatings market in 2020, based on formulation. This was mainly due to the highly soluble, elastic, versatile, and non-toxic nature, as well as the water resistance, of acrylic compounds. In addition, the increasing use of acrylic coatings on interior and exterior walls, windows, and door panels is a major factor driving the demand for them.

The UV category is projected to register the fastest growth in the market during the forecast period (2021–2030), based on technology. This can be attributed to the increasing adoption of these variants in the aerospace industry as they offer high reactivity, rapid curing, long shelf life, low-temperature processing, virtually no volatile organic compound (VOC) emission, high hardness, and abrasion resistance. Moreover, the UV curing technology can be used in industrial finishing areas, such as wood coating, automotive coating, wire coating, packaging coating, metal decorative coating, and floor finishing.

Geographically, APAC was the largest market for paints and coatings in 2020, and during the forecast period, it is expected to witness the fastest growth, owing to the increasing demand for paints and coatings for the renovation and repair of commercial and residential buildings. Additionally, the increase in the government and private investments in the construction and automotive sectors is driving the paints and coatings market in the region. For instance, according to the India Brand Equity Foundation (IBEF), in Union Budget 2021–2022, to support initiatives such as Housing for All and Smart Cities Mission, the Government of India allocated $1.89 billion (INR 13,750 crore).

Smart coatings can change their properties according to an external stimulus, such as temperature and electric field. They are increasingly being used in commercial applications, and also offer various advantages in a range of other applications, such as repairing damaged aero engines and oil and gas platforms. Due to their self-cleaning, self-healing, and self-stratifying properties, smart coatings have gained traction in the market in recent years, as consumers are willing to pay premium prices for them. Hence, the rising adoption of these solutions is trending in the market for paintings and coatings. 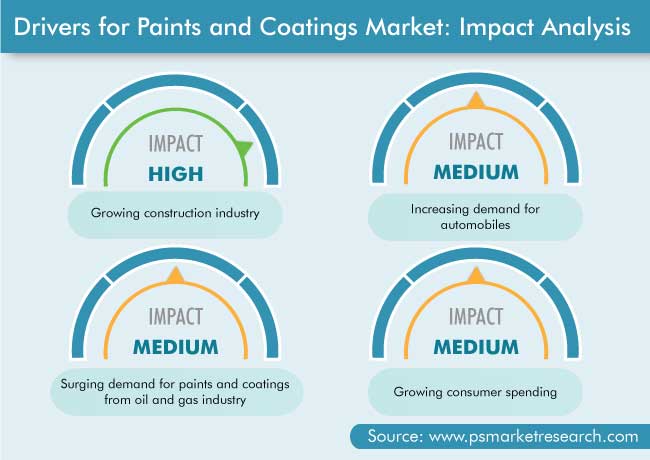 The construction industry is growing at a significant pace in Sweden, the U.S., China, India, Canada, Australia, and the U.K., owing to the rising population and increasing urbanization rate. This has resulted in the increasing investment in construction projects, such as hotels, apartments, offices, retail centers, and civic infrastructure. For instance, construction output in India is expected to grow at an average of 7.1% each year till 2025. Moreover, in April 2020, the Government of India set a target of constructing roads worth $212.8 billion in the next two years. Thus, the government investments in infrastructure development are propelling the consumption of paints and coatings.

Globally, the increasing demand for automobiles, on account of the rapid urbanization, rising disposable income, and changing lifestyles, is also directly affecting the growth of the paints and coatings market, as these materials are widely used in automobile applications, especially since people are becoming more inclined toward purchasing attractive vehicles. For instance, in 2019, around 91.3 million automobiles were sold worldwide, while the sale in 2014 was 88.3 million units. This not only drives the usage of paints and coatings during auto production, but also during their lifetime, such as for painting over scratches.

The global paints and coatings industry is fragmented due to the presence of a large number of players in almost every country across the globe, which has increased the competition. In recent years, players in the market have involved in mergers and acquisitions in order to attain a significant position. For instance:

Key Players in Global Paints and Coatings Market Are:

The global paints and coatings market report offers comprehensive market segmentation analysis along with market estimation for the period 2015–2030.

Frequently Asked Questions About This Report
How large is the paints and coatings market?+

How many segments does the paints and coatings industry report have?+

There are four segments in the paints and coatings industry report: technology, formulation, application, and region.

Which are the largest and fastest-growing regions in the paints and coatings market?+

APAC dominates the market for paints and coatings, and it will also witness the highest CAGR.

What is the biggest trend in the paints and coatings industry?+

The key paints and coatings industry trend is smart coatings, which modify their properties in response to external stimuli.

Why is the paints and coatings market fragmented?+

The presence of a large number of companies in almost all countries makes the market for paints and coatings fragmented.