In 2015, the global water pump market was estimated at a value of $42,435.1 million, and it is expected to demonstrate a CAGR of 5.9% during the forecast period 2016-2022. The growing construction industry, increasing disposable income, growing water scarcity, rapid industrialization in developing economies, and increasing level of urbanization are driving the growth of the water pump market. 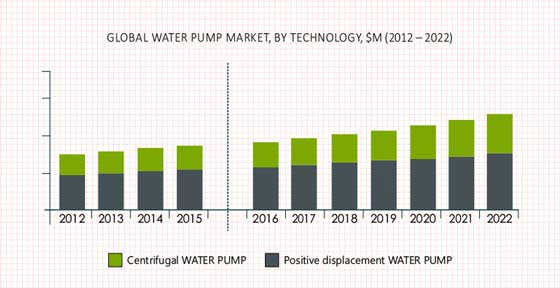 Water pumps are mechanical devices with usage in households and several industries. With the increase in population in urban areas, the current water infrastructure is facing a pressure. This comprises of utility water delivery, treatment and removal of wastewater. In order to prevail this situation, several governments in Africa and Asia are likely to increase spending on schemes for drinking water and irrigation activities. In 2011, in its 12th Five Year Plan, the Chinese government allotted $112 billion in order to upgrade piping and water treatment systems. Moreover, in the recent years, usage of water pumps in urban households has witnessed a rise. Lifestyle of the sub-urban population is modern and fast-paced, as compared to that of rural population. A large number of manufacturers are offering varieties of water pumps in order to meet increasing demand from households.

By application, municipal water and wastewater segment dominated with the largest share in the global water pump market in 2015, and it is expected to continue its dominance during the forecast period.

By technology, the market has been categorized into positive displacement and centrifugal pumps. Positive displacement segment includes reciprocating pump, rotary pump and others. This operates by forcing a fixed volume of liquid from the inlet pressure section of the pump into the discharge zone. These pumps help in increasing viscosity and efficiency. Due to this, they are majorly used in industries such as pharmaceutical, chemical, pulp and paper, food and beverage, and wastewater treatment. Centrifugal pumps are a rotodynamic pump that require a rotating impeller in order to increase the pressure and flow rate of a fluid. These are mostly used to move fluids through a piping system. Centrifugal pumps comprise of two basic elements - stationary element and rotary element. These have a vast application base in fire protection systems in industries, hot water circulation systems, wells and buildings. Between the two technologies, centrifugal water pump segment had a larger share in the global market for water pump in 2015.Geographically, APAC accounted to have the largest share of 42.9% in the global water pump market. APAC is also expected to witness the fastest growth, demonstrating a CAGR 6.6% during the forecast period. Some of the major driving forces for the Asia-Pacific water pumps market include rapid industrialization, rising disposable income and increase in level of urbanization.