The global VCSELs market size was $1.5 billion in 2021, and it is projected to reach $6.96 billion by 2030, growing at a CAGR of 18.6% during 2021–2030. This growth is primarily attributed to the rising adoption of 3D sensing features in smartphones. The proximity sensor, flood illuminator, and dot projector used in 3D camera sensors are all based on laser components.

Moreover, the advantages of surface-emitting lasers (SELs) include high modulation rates, low power consumption, wavelength stability, and optical efficiency, which have resulted in a surge in the product demand around the world. 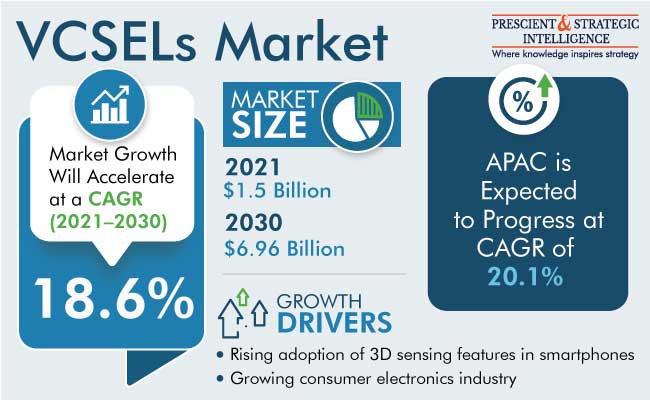 Furthermore, this device is used for mapping a person's facial characteristics and storing the data as a faceprint. This usage is being sped up by the expanding use of biometric systems by corporations and governments due to the rising number of security breaches. This is also attributable to the inclusion of high-quality cameras in portable electronics, which has made face recognition a practical method of identification and authentication.

Based on type, the single-mode category held the larger market share, in 2021.

This is attributed to the growing popularity of mobile apps and the ability of single-mode variants to increase the life of lithium-ion batteries, reduce power consumption, and enhance the user experience. Due to their high output, efficiency, and low power consumption, they are employed in cordless devices, such as wireless laser mice and mobile phones.

Single-mode lasers also have reduced attenuation, which enables the signal to travel farther. Moreover, they are costlier than multi-mode lasers due to the high density of laser diodes. Additionally, the improved coupling with the optical fiber without the requirement for beam-shaping devices, low price, high power efficiency, capacity for long-reach optical interconnects, and powerful laser output with polarization locking have encouraged sectors to embrace this technology.

Multi-mode VCSELs are expected to grow at the higher CAGR, of around 20.3%, in the coming years. These vertical-cavity surface-emitting lasers can attain high power densities with better rise time. As a result, their usage in time-of-flight (TOF), industrial, illumination, LiDAR, and other high-power applications is burgeoning.

Based on material, gallium arsenide (GaAs) held a market share of more than 64%in 2021 due to the rising adoption of GaAs-based vertical-cavity surface-emitting lasers in proximity sensors, which are increasingly being integrated into smartphones and other consumer devices. In addition, the growing usage of GaAs in LiDAR applications is expected to create numerous opportunities for the players operating in the market. The need for GaAs-based vertical-cavity surface-emitting lasers in 3D sensing applications is set to rise as a result of the technological advancements in AR/VR gadgets.

Based on application, sensing will grow at the highest CAGR, of around 25.0%, in the next few years. The rapid growth is attributed to the rising need for object detection, face recognition, and home & building automation, advancements in logistics, and growing penetration of Industry 4.0 technologies. Moreover, to increase speed and accuracy, laser-based sensors are employed in automotive, manufacturing, smartphone, and consumer electronics.

Based on end user, the automotive industry will grow at the highest CAGR, credited to the expansion of the application of these devices in automotive infotainment and driver monitoring systems. They are finding more uses in ADAS, to facilitate the transition of the automotive industry to autonomous cars. The most-recent innovation in vehicle safety is LiDAR, which is increasingly utilizing solid-state VCSELs. Hence, the quick consumer transition toward autonomous vehicles and growing importance of LiDAR in driver monitoring and gesture recognition will drive the market growth in the coming years. 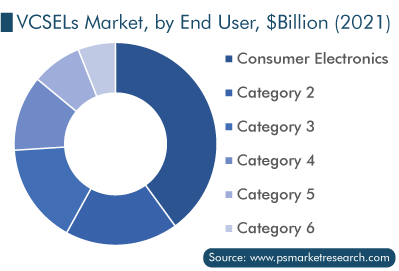 Vertical-cavity surface-emitting lasers are crucial in smartphone applications for 3D sensing. High-end smartphones now come with cameras that can scan things and depict them in three dimensions. When used in combination with the right software, the cameras allow the user to perceive light levels, motion, and textures with more accuracy.

Additionally, smartphones can now perform complicated functions, such as 3D object identification, modeling, and augmented reality (AR), by using their cameras. These applications have resulted from the technical improvements in 3D sensors employing vertical-cavity surface-emitting lasers, thus propelling the growth of the market over the forecast period.

Furthermore, the integration of these instruments by Apple Inc. into its smartphones for 3D sensing applications has raised the demand for the technology, as competitors, such as Xiaomi, Huawei, and Samsung, are rapidly following suit. As a result, the increasing emphasis of smartphone companies on new, complex applications is expected to fuel the demand for VCSELs in the coming years.

North America accounted for an more than 22% market share in 2021, and it is projected to grow at a substantial CAGR over the forecast period. This can be ascribed to the presence of major industry players, and growing consumer electronics market across the region.

Additionally, the increasing adoption of the VCSEL technology for data transmission is expected to create a significant demand for these lasers for data centers in the coming years. VCSELs are required when the data to be transferred over a network is quite voluminous.

Moreover, the rising data center investments in the region add to the expansion of the market. The existence of significant manufacturers, such as Broadcom Inc. and Lumentum Holdings Inc., as well as the expanding emphasis on cloud infrastructure, all contribute to the growth of the North America VCSELs market.

Europe stood second in 2021 due to the rising demand for advanced consumer electronics and smart wearables in the U.K., Italy, France, and Germany. Furthermore, VCSELs provide a superior optical performance at a lower cost than comparable semiconductor-based lasers. As a result, there has been an increase in the product demand across several application areas throughout Europe. 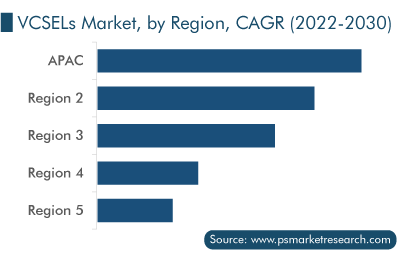 Top Players in VCSELs Market Are:

Based on Data Rate

Frequently Asked Questions About This Report
What is the estimated growth rate of the global VCSEL market?+

What is the projected 2030 value of the VCSEL industry?+

Which type is more popular in the VCSEL market?+

Single-mode variants sell more in the market for VCSELs.

The U.S., Italy, France, the U.K., Germany, India, China, and Japan are considerable size holders in the VCSELs industry.

Which is the largest VCSEL market by end user?+

The market for VCSELs is dominated by the consumer electronics industry.