The global AR and VR market was valued at $28.5 billion in 2021, and it is expected to reach $200.1 billion by 2030, growing at a CAGR of 24.2% between 2021 and 2030. This is primarily attributed to the surging adoption of these technologies in the gaming, entertainment, education, tourism, retail, and healthcare sectors.

Furthermore, governments worldwide are supporting the adoption of various automation and new technologies for the development of the manufacturing industry and the growth of industrial enterprises. Also, industrial and enterprise applications are increasingly relying on AR technology for on-site advancements and digitization. Thus, such factors are responsible for the market expansion.

Moreover, the rising demand for gesture and haptic control is supporting the growth of the industry. The haptic technology is used to create a sense of touch that users feel in the form of applied forces, motions, or vibrations, whereas gesture recognition algorithms control devices and applications, typically with their body movements. With these technologies, users can touch a virtual object, as if in the real world. The rising popularity of these technologies has added a new dimension to these devices, thereby driving their adoption in the virtual reality market. 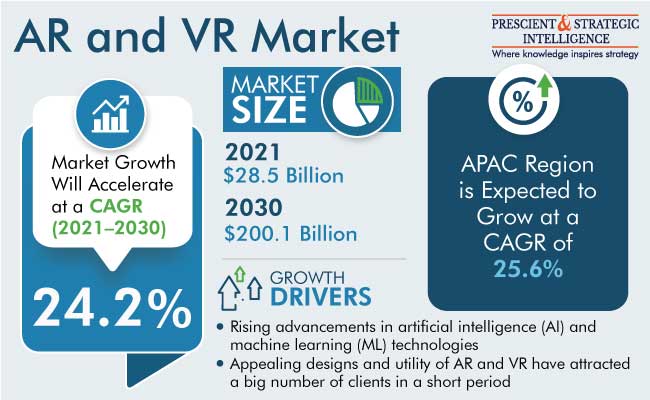 AR technology accounted for a higher share in 2021. The increasing focus of companies on developing innovative methods to capitalize on the potential of AR technology and delivering a unique and engaging experience to end users is projected to fuel the technology demand over the forecast period. Additionally, the increased penetration of portable devices, such as smartphones and smart glasses, as well as the subsequent rise in the use of mobile AR technologies to deliver a more immersive experience, is projected to drive the market in the near future.

Moreover, manufacturers use AR-based apps for assembly operations, manufacturing functions, production line functions, task analysis, and problem-solving. As a result, the increased need for remote support and collaboration from businesses involved in optimization and workflow management is predicted to fuel the market in this category throughout the projected period.

The demand for AR devices and their applications in healthcare is rising. These devices may be used to provide a surgeon with a virtual picture of a patient's bodily parts, allowing them to examine their condition. This can help the surgeon in doing less intrusive surgery. Moreover, the healthcare sector will gain profits from the use of augmented reality modeling and 3D visualization. Also, AR is used for enhancing fitness, teaching difficult subjects to medical students, training physicians, managing pharmacies, and caring for and supporting patients.

The hardware category held a larger revenue share, of around 61%, in 2021, owing to a significant dip in the prices of hardware devices, their high popularity in the gaming industry, and easy availability. Additionally, it will generate higher revenue in the coming years as well. This will be due to the spurring demand for high-quality entertainment content and the emphasis of companies on improving their display features and offering customized items to enterprises.

AR devices are further classified into HMDs, HUDs, and handheld devices. Among these, HMDs lead the AR devices market, accounting for 58% revenue in 2021. The demand for HMDs is also expected to witness notable growth in the coming years, owing to the increasing need for lightweight displays, advancements in technology, and the rising patent portfolio of companies. Also, AR-based HMDs are gaining popularity in industries such as tourism, automotive, military, gaming, and education. Besides, the surging adoption of mobile AR and the increasing investments by large tech companies will drive the demand for AR-based HMDs in the near future.

The consumer application category accounted for the largest revenue share, of around 55.6%, in 2021, and it is expected to retain its dominance in the market over the next few years. This is primarily attributed to the rising awareness of these advanced technologies and the burgeoning demand for more interactive and immersive games. Additionally, the growing disposable income has amplified the sales of gaming systems, which, in turn, would boost the industry growth in this category during the forecast period. 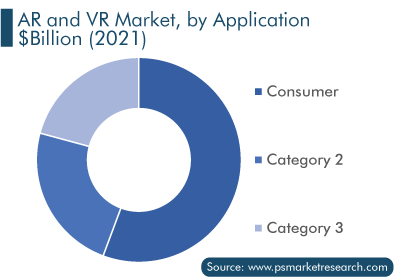 Smartphone usage and technology improvements have enabled people to view virtual graphics embedded in real-world surroundings. Furthermore, users may connect with pictures and objects to engage with them by just utilizing a camera on their smartphones. In addition, AR and VR technologies are becoming key components of smartphones, and the need for these technologies is driven by the surging demand for such devices. Moreover, smartphone manufacturers are currently working to produce the next generation of revolutionary computing devices, which are projected to open up new potential for the market growth.

Furthermore, AR can be provided by smartphone alone, due to the integration of location-based AR apps. Even though the acceptance of augmented reality is still in its initial phase, there are enormous prospects for the widespread adoption of AR since the demand for smartphones is predicted to increase rapidly in the next few years, especially in emerging nations like China and India. Thus, this is expected to create several opportunities for businesses operating in this market.

In 2021, the enterprise sector held a significant revenue share. The application potential of these technologies among enterprises is huge, with all major players such as device manufacturers, app developers, and solution providers targeting the industry. Moreover, most Fortune 500 companies have started experimenting with AR and VR technologies, and some of them have already started pilot projects with these technologies. The main objective of these pilot projects is to find out how these technologies can be helpful in increasing productivity and cutting down the operational costs of organizations.

For instance, The Boeing Company decreased its wiring production time by 20–25% and reduced the error rate to zero by using smart glass displays. Besides, several logistics companies are adopting smart glasses to guide warehouse pickers in assembling shipments, thereby resulting in reduced error rates. As more and more companies are willing to adopt these technologies in their operations, the market is expected to witness an increase in demand for enterprise solutions in the near future.

North America led the market, with a revenue share of around 35%, in 2021. The governments of the U.S. and Canada are investing heavily in the deployment of such technologies for numerous industries, including aerospace & defense, healthcare, and education, for training purposes, which is expected to drive the regional demand. In addition, the U.S. accounted for a larger revenue share in the region, owing to the high investment in these technologies and the presence of several leading technology companies such as Google LLC, Microsoft, and Apple Inc.

Whereas, the APAC market held a substantial share, of around 25%, in 2021, and it is projected to witness the fastest growth over the forecast period. This is due to the rising investments in the commercial and defense sectors, growth in the healthcare and automotive industries, and rapid industrialization in countries such as China, Japan, India, and South Korea. Being home to several developing economies and a large number of display panel manufacturers, the region is expected to witness increased adoption of these technologies in the coming years. 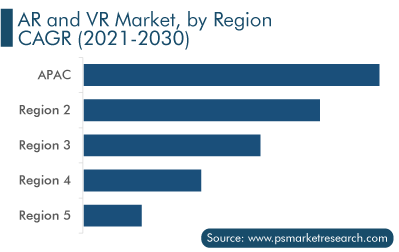 Top Players in the AR and VR Market Are:

Frequently Asked Questions About This Report
What was the size of the AR and VR market in 2021?+

What will be the growth rate of the AR and VR market during the forecast period?+

Which is the largest device type in the AR and VR market?+

Head-Mounted Displays (HMDS) is the largest device type in the AR and VR market.

What are the major drivers for the AR and VR market?+

The major drivers of the AR and VR market include the rising advancements in artificial intelligence (AI) and machine learning (ML) technologies, and the appealing designs and utility of AR and VR have attracted a big number of clients in a short period.