The Turkish micromobility market was valued at $92.8 million in 2020, and it is expected to grow at a CAGR of 64.5% during the forecasted period (2021–2030). The major factors driving the growth of the market include the requirement of maintaining green environment, pursuit of efficient transportation system for short distances, and need for reducing traffic congestion.

The COVID-19 pandemic has been impacting a large portion of the people around the world including Turkey, bankrupting corporations, and plunging the global economy into a turmoil. Although shutdown steps and quarantine orders have been helping in containing the coronavirus, considerable financial distress has also been witnessed. Turkey is among the first few countries that curtailed the first wave of coronavirus. However, re-spreading of the virus has created opportunity for micromobility service providers, as people are looking for a transport mode that can reduce people interaction and maintain social distancing. This has increased the demand for micromobility fleet in the country. 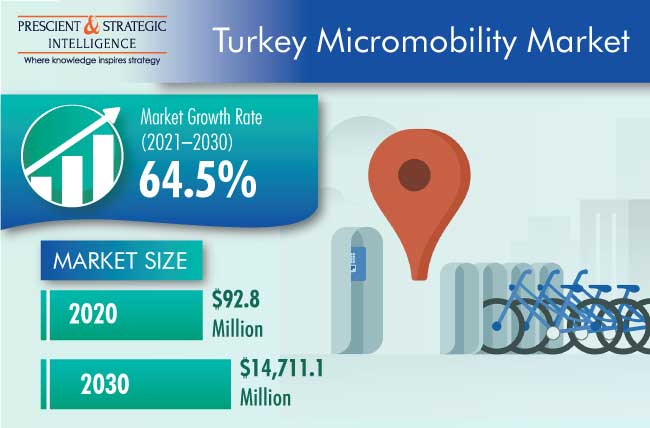 E-Scooters Dominated the Market, Due to its Large Fleet Size

The e-scooters category accounted for the largest value share in 2020 in the Turkish micromobility market, based on vehicle type. This category is also expected to continue witnessing the same trend during the forecast period. This is majorly attributed to the large fleet size of e-scooters, which results in their high availability in the market, as compared to other vehicle types.

First- and Last-Mile Model To Witness Faster Growth, Due to High Urban Congestion

The first- and last-mile category is expected to grow at a higher rate during the forecast period, on the basis of model, in the Turkish micromobility market. This is attributed to the fact that the high congestion in the country is creating parking problem. Further, harmful emission from cars is creating more problems in the nation, where congestion is at a high level. Therefore, in this scenario, bikes and e-scooters are solving the problems especially in the first- and last-mile model, as they save the users time and remove the parking problem.

Growing Competition in E-Scooter Category Is a Key Market Trend

In Turkey, micromobility sharing services started in early years of last decades in which people use bikes to travel short distances. However, in 2018, e-scooter came into the picture of micromobility when Marti Technology Ltd. stated operating in the Turkish micromobility market using e-scooters; slowly, many other players enter into the market after seeing high adoption of e-scooters by individuals. This has created a competitive environment among peers, and each company trying to capture a larger audience by providing new offers like lower cost, subscription-based services, and first few minutes free ride. 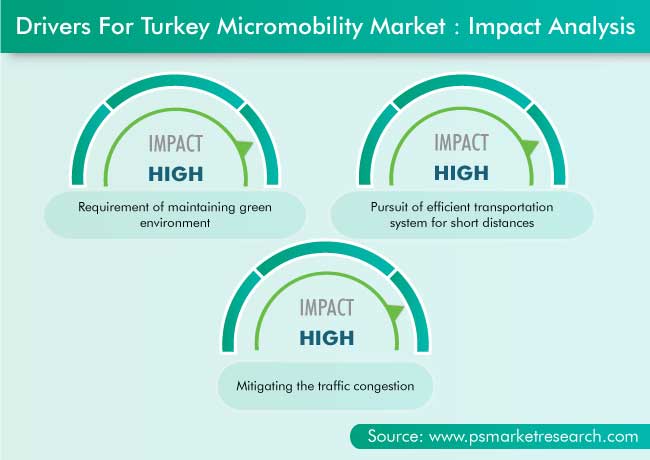 Requirement of Maintaining Green Environment Is Driving the Market Growth

In Turkey, environment pollution is one the biggest issues. Air pollution level across the country is above the World Health Organization (WHO) guidelines, resulting in deadly diseases. On an average, around 27% of total health expenditure of the country spend on treating health problems caused by air pollution. Micromobility is helping the government in reducing pollution level. The growth of the micromobility ecosystem has been exponential, due to factors such as high availability, low pricing, ease of functioning, and friendly to the environment. Furthermore, in the long run, the micromobility services would replace cars being used for short-distance traveling, i.e., within 5 km. Moreover, they reduce the level of emission caused by vehicles driven for short-range trips, which, in turn, bolsters their demand and use.

According to a traffic report by transportation analytics firm INRIX, Istanbul has emerged as the second most congested city among 220 cities in the world. With the rapid urbanization, the number of commuters is increasing, which is adding extra burden on the existing transportation systems. In the absence of an efficient means of public transportation, people tend to choose personal vehicles, further complicating the situation and leading to more traffic congestion. Hence, micromobility provides a better connectivity to the public transit, reduces the reliance of people on their personal vehicles, and also helps in cutting down greenhouse gas emissions. It is viewed as an innovative transportation strategy, which has demonstrated a great potential for congestion mitigation.

In recent years, the players in the Turkish micromobility market have been involved in various investments and funding activities in order to attain a significant position in the market. For instance:

Frequently Asked Questions About This Report
How much will the Turkish micromobility market value in 2030?+

How much growth rate is the Turkish micromobility market expected to record during 2021–2030?+

Which is the most-significant vehicle type in the Turkish micromobility industry?+

E-scooters are the largest category under the vehicle type segment of the Turkish micromobility industry.

What are the key drivers for the Turkish micromobility market?+

The major Turkish micromobility market drivers include the requirement of maintaining green environment, pursuit of efficient transportation system for short distances, and mitigating the traffic congestion.

Which is the strongest strategic measure among players in the Turkish micromobility market?+

Most Turkish micromobility market players are adopting the strategy of investments and funding activities to sustain their business growth.