The solid-state battery market size is projected to reach $775.2 million by 2030 from $61.3 million in 2021, at a 32.6% CAGR during 2021–2030. The rising adoption of electronic gadgets, the surging deployment of EVs, and the increasing utility of battery management and energy storage systems are the key factors driving the industry.

In addition, the market is likely to be influenced by the increasing number of robot shipments globally. Moreover, the rising R&D activities associated with solid-state batteries, the increasing adoption of IoT-based systems, and the miniaturization of electronic devices have emerged as major driving forces in the industry.

However, the COVID-19 pandemic impacted the market supply chain and production plants, which hindered the market growth. Manufacturers of battery packs, producers of electrode materials, suppliers of raw materials, and other participants in the value chain suffered a major setback, and they are expected to take significant time to recover. 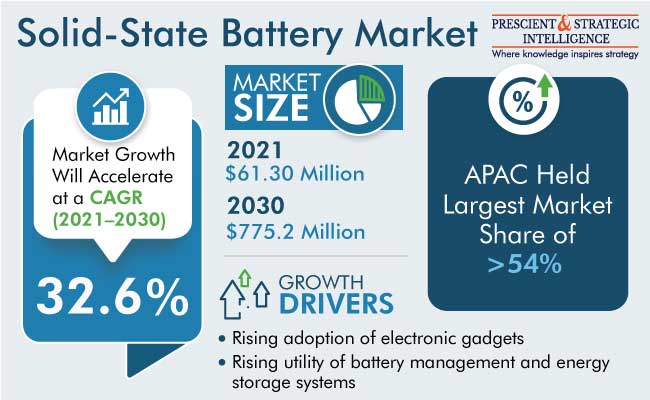 The 20–500 mAh battery capacity category held the highest revenue share, of 68.2%, in 2021. This is because solid-state battery applications, such as energy storage systems, wearable medical devices, and domestic appliances, require these variants. In addition, the consumer electronics sector’s swift growth results in the rise in these products’ demand. 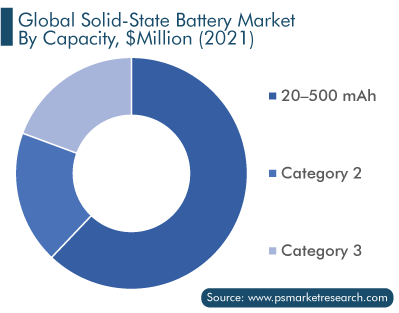 Demand for Solid-State Batteries in EVs To Witness Fastest Growth

The EVs category, based on application, is projected to record the highest CAGR in the foreseeable future, as these energy storage devices are increasingly being used in EVs. Also, technological advancements in automotive batteries, as well as favorable regulations for EVs, are encouraging the deployment of these vehicles over gasoline, diesel, LPG, and CNG vehicles.

On the other hand, wearable & medical devices dominate the solid-state battery market, due to the sudden increase in the demand for temperature sensors, pacemakers, and pulse oximeters, coupled with technological advancements in these devices. Moreover, the category held a market share of 80.6% in 2021 and is expected to take the lead in the coming years, owing to the rising demand for smart wearables, laptops, and smartphones. 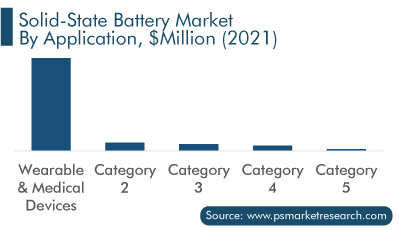 Thin-film batteries accounted for the majority of the market share over the past years, and they would advance at a healthy CAGR, to reach $567.4 million by 2030. These variants are generally employed in IoT and smart AI devices, such as smartwatches and fitness bands, owing to their effective revitalization rate, smaller size, higher average output voltage, lower weight, higher energy density, higher flexibility, lower chances of electrolyte leakage, longer shelf life, tighter packing, and condensed structure.

In 2021, APAC claimed the largest market share, of around 54.4%, and it is also forecasted to hold its supremacy throughout the forecast period. A large consumer base for portable electronics, advancements in the renewable energy sector, and growth in the utilization of battery management systems are the major factors prompting these batteries’ sales in the region. Moreover, public authorities in China and India intend to lower the carbon footprint of vehicles and boost the usage of EVs.

In the APAC region, China has been the largest consumer of solid-state batteries, owing to their bulk manufacturing by major battery companies and the presence of a large automotive manufacturer base. For instance, in December 2020, Toyota unveiled a solid-state battery with a capacity of 1,000 mAh.

Extensive R&D is leading to the improving capability of these batteries, which will boost the expansion of the solid-state battery market in the years ahead. For instance, in July 2021, the German government provided funds of around $2.1 million (EUR 1.8 million) for a research project, namely, SoLiS – Development of Lithium-Sulphur Solid State Batteries in Multilayer Pouch Cells. This project aims to transfer a promising battery concept from fundamental research to industrial application. This research includes the basic possibility of a Li-S solid-state battery, which has already been verified on the laboratory scale.

Similarly, in May 2021, researchers at Harvard University innovated a long-lasting, stable, solid-state lithium battery, to fix a 40-year problem. These batteries can be charged at least 10,000 times at a high current density. Researchers paired the new design of the battery with a commercial high-density cathode material. Likewise, most of the top manufacturers are working on the improvement of these batteries, which will likely boost their demand across industries.

Similarly, Murata Manufacturing Co. Ltd. created a solid-state battery with a high energy density in 2019. This new battery outperforms traditional lithium-ion secondary batteries in terms of safety and durability; therefore, they are ideal for wearable devices, such as wireless earphones, which require a high level of safety and are intended to be used for long periods; and the battery can also meet the diverse needs of the emerging IoT society. Similarly, the development of high-energy-density batteries for EVs has resulted in a considerable increase in the market growth.

Based on Cell Type

Frequently Asked Questions About This Report
What was the size of the solid-state battery market in 2021?+

What will be the growth rate of the solid-state battery market during the forecast period?+

Which is the largest application in the solid-state battery market?+

Wearable & Medical Devices is the largest application area in the solid-state battery market.

What are the major drivers for the solid-state battery market?+

The major drivers of the solid-state battery market include the rising sales of these products for various applications, the surging investments from top manufacturers, and the increasing research activities in this field.