The global single-use negative pressure wound therapy (NPWT) devices market generated $770.2 million revenue in 2020, and it is expected to grow at a CAGR of 8.1% during 2020–2030. The key factors responsible for the growth of the market include the rising prevalence of diabetes and high rate of C-section surgeries, which is leading to the increasing post-operative uses of single-use NPWT devices.

COVID-19 has impacted almost every industry including single-use NPWT devices market in a negative way owing to the lockdowns implemented to curtail the spread of the disease. As a result, manufacturers of single-use NPWT devices across the globe too have been negatively impacted. The pandemic disrupted the supply chains of this sector in 2020; however, near the end of 2020, the process of lockdown lifting was initiated in phases across various countries. With the lifting of the lockdowns in most parts of the world, a positive sign for the surge of the economy has been seen, which has led to a rise in the demand for goods and services, including single-use NPWT devices, globally. 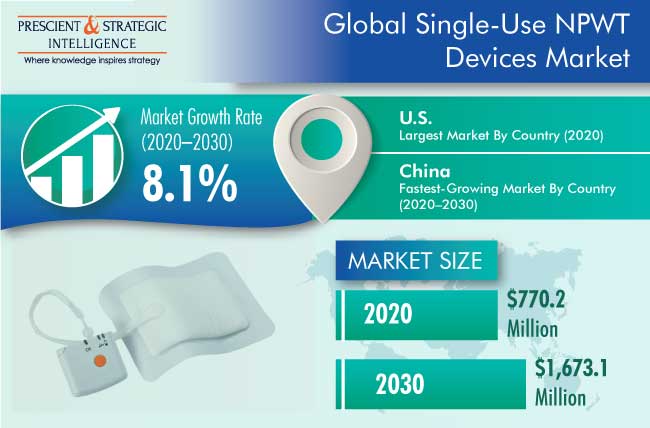 The surgical wounds category held the largest market share in 2020, based on application. This is ascribed to the rising prevalence of surgical wounds and surging need for single-use NPWT systems for outpatients, patients at home, and those who have restricted mobility. The low weight, canister-free nature, and consistency in the biological properties of these devices, including fluid handling, pressure transmission to the wound bed, tissue contraction, and changes in the blood flow, are expected to drive the market growth in this category.

Hospitals Generate Highest Revenue due to Increase in Footfall of Patients

Hospitals have emerged as the highest-revenue-generating end user in the single-use negative pressure wound therapy devices market owing to a greater footfall of patients here and increasing accessibility of hospitals to people of all income levels. Patients prefer hospitals because they employ trained doctors and technicians and offer better facilities and more-extensive care than other medical settings.

North America was the largest region in the market for single-use NPWT devices in 2020, and it is expected to lead throughout the forecasted period too. This can be ascribed to the presence of a large number of market players, high healthcare spending, and surging number of research and development (R&D) studies in the area. Further, individuals in the region are much more aware of these devices compared to those in other regions, thus resulting in a high penetration of single-use NPWT devices.

APAC is expected to witness the fastest growth during the forecast period (2021–2030) in the single-use negative pressure wound therapy devices market. This is mainly on account of the booming geriatric population, surging number of cases of burns and traumatic wounds, and large population. Further, the increasing focus of countries on the healthcare sector in the light of COVID-19 would help the region grow at a high rate. 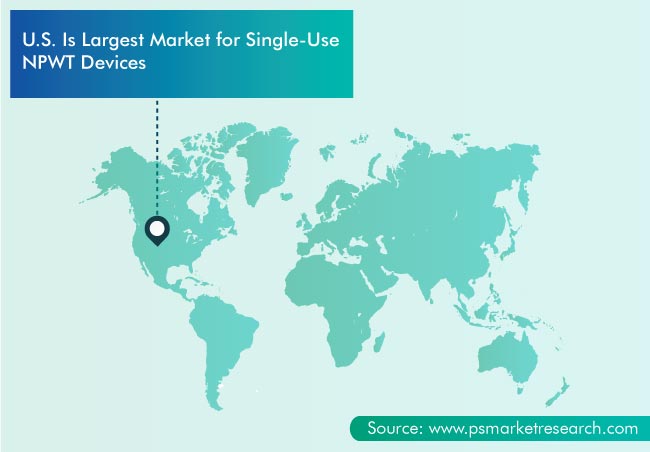 Globally, a shift in the preference of patients toward advanced wound therapies from traditional wound therapies and devices is being seen. It is observed one of the key trends in the single-use negative pressure wound therapy devices market. Traditional wound care generally involves products that provide “dry” healing, when used for primary dressing or as supplementary to the primary moist wound healing products (serving as a secondary dressing to hold the primary dressing in place and/or absorb excess exudate). Whereas, advanced wound care therapies offer quick patient recovery by accelerating the healing process.

The increasing cases of burns are the key factor propelling the growth of the single-use negative pressure wound therapy devices market, globally. According to the World Health Organization (WHO) in 2018, an estimated 180,000 deaths due to burns were being reported every year, the majority of them in low- and middle-income countries. Besides, burns are one of the leading causes of disability-adjusted life years (DALY), which is a measure of the overall disease burden expressed as the number of years lost due to ill health, disability, or early death. Such statistics suggest that the demand for advanced wound care solutions, including single-use NPWT devices, will increase considerably in the coming years.

The number of diabetic patients is increasing rapidly across the world. Diabetic foot ulcers are a chronic complication of diabetes mellites, which requires frequent dressing. Additionally, in diabetic patients, wounds tend to heal more slowly and develop quickly. According to the Centers for Disease Control and Prevention (CDC), in 2020, more than 34.2 million people had diabetes in the U.S. and 34.5% of the adult population in the country had prediabetes. Thus, with the growing diabetic population, the demand for various wound management products, including single-use NPWT devices, is expected to increase rapidly.

The growing geriatric population is another major factor driving the single-use NPWT devices market. According to the World Population Ageing 2020 report of the United Nations (UN), globally, there were 727 million people aged 65 years and above in 2020, who are expected to number 1.5 billion by 2050. Skin changes due to aging increase the risk of skin damage and wounds; thus, the growing aging population is increasing the customer base for single-use NPWT products.

According to a research article published in PLOS ONE Journal, titled ‘The Increasing Trend in Caesarean Section Rates: Global, Regional and National Estimates: 1990–2014’, in February 2016, the rate of C-section deliveries is on the rise. According to the data collected from 150 countries, currently, 18.6% of all births occur by C-section, ranging from 6% to 27.2% in the least- and most-developed regions, respectively. Hence, with the increase in C-section surgical procedures, it is expected that the demand for single-use NPWT devices would increase.

In recent years, players in the single-use negative pressure wound therapy devices market have been involved in product launches in order to attain a significant position. For instance:

Frequently Asked Questions About This Report
What was the single-use NPWT devices market value in 2020?+

How many segments are in the single-use NPWT devices industry report?+

Which is the highest-revenue-generating region in the single-use NPWT devices market?+

The market for single-use NPWT devices accumulates the highest revenue from North America.

Why is the single-use NPWT devices industry growing?+

What is the nature of the single-use NPWT devices market?+

The market for single-use NPWT devices is consolidated.