The global negative-pressure wound therapy (NPWT) devices market generated $2,248.1 million revenue in 2020, and it is expected to grow at a CAGR of 7.7% during 2020–2030. The key factors responsible for the growth of the market include the increasing cases of burns, rising prevalence of diabetes, growing geriatric population, and high rate of C-section surgeries leading to the increasing post-operative use of NPWT devices.

During the COVID-19 pandemic, the implementation of lockdowns and partial factory closures disrupted the market for NPWT devices across the world in the first two quarters of 2020. This and the reduced demand, impacted monthly income of individuals, and constraints in the handling of goods at ports led to the reduced trade of NPWT devices. 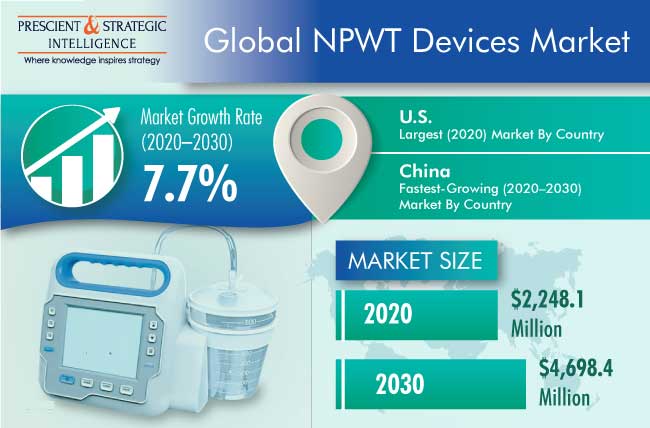 The chronic wound category is expected to witness the faster growth during the forecast period (2021–2030), based on wound type. This is majorly attributed to the surging incidence of diseases such as chronic venous insufficiency, peripheral arterial occlusive disease, and diabetes mellitus. Since elderly people are more prone to such medical conditions, they generate a considerable demand for wound care products.

The conventional category led the market for NPWT devices in the historical period (2015–2020), and it is expected to maintain the same trend during the forecast period, based on product. This can be attributed to the wide acceptability of these devices, especially in developing countries with a large population, such as India and China.

Hospitals and clinics have emerged as the highest-revenue-generating end users in the NPWT devices market. This is mainly due to the greater footfall of patients and increasing accessibility of hospitals to people of all income levels.

Due to Presence of Key Players, North America Leads Market

Geographically, North America will account for the major share in the market for NPWT devices throughout the forecast period. This can be attributed to the greater presence of market players, higher healthcare expenditure, and increasing research and development (R&D) activities in the region.

The Asia-Pacific (APAC) market is expected to witness the fastest growth during the forecast period owing to the booming geriatric population, surging number of cases of burns and traumatic wounds, and large population in the region. 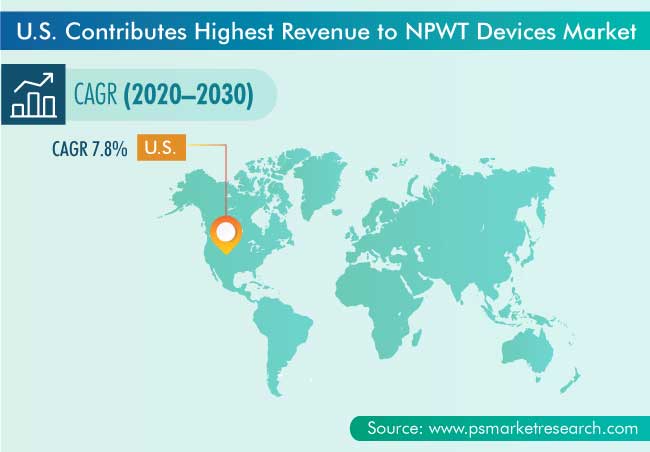 Shift in Preference toward Advanced Wound Therapies Is Key Trend

Globally, the preference of patients is shifting toward advanced wound therapies from traditional wound therapies, thus making the former a major trend in the NPWT devices market. Advanced wound care therapies offer quick patient recovery by accelerating the healing process. Besides, a number of articles suggest that NPWT is better than traditional wound therapies. According to an article published in InfotechOpen, NPWT is a beneficial wound management and therapy system as it enhances protein and collagen production, diminishes bacterial colonization in patients, and reduces surgical site infection (SSIs) and wound dehiscence by 50% in high-risk patients.

The increasing cases of burns are a key factor propelling the growth of the market for NPWT devices globally. According to the statistics published by the World Health Organization (WHO) in 2018, an estimated 180,000 deaths due to burns were being reported every year, the majority in low- and middle-income countries (LMICs). Besides, burns are one of the leading causes of disability-adjusted life years (DALY). According to the WHO, in 2020, over 96% of the fatal fire-related burns occurred in LMICs, which is leading to the rising demand for NPWT devices.

The number of diabetic patients is increasing rapidly, which is leading to the growth of the NPWT devices market. Diabetic foot ulcer is a chronic complication of diabetes mellitus that requires frequent dressing. Additionally, in diabetic patients, wounds heal more slowly and develop quickly. According to the Centers for Disease Control and Prevention (CDC), in 2020, more than 34.2 million people had diabetes in the U.S. and 34.5% of the adult population had prediabetes. Moreover, newly diagnosed cases of type 1 and type 2 diabetes have increased among the young population of the country.

In recent years, players in the NPWT devices industry have been involved in mergers and acquisitions in order to attain significant position. For instance:

Based on Wound Type

Frequently Asked Questions About This Report
What will be the 2030 size of the NPWT devices market?+

How many segments are there in the NPWT devices industry report?+

What is the key trend in the NPWT devices market?+

Advanced wound management products are trending in the market for NPWT devices.

What is the NPWT devices industry competitive landscape nature?+

The competitive landscape of the NPWT devices industry is fragmented.

What measures are being taken by NPWT devices market players?+

Players in the market for NPWT devices are engaging in mergers, acquisitions, and partnerships.