The nebulizer market size was $765.1 million in 2019, and it is projected to reach $1,698.1 million by 2030, progressing at a CAGR of 7.4% during 2020–2030. The growth can be ascribed to the rising geriatric population, soaring consumption of cigarettes, surging cases of respiratory diseases, and growing prevalence of COVID-19.

The outbreak of COVID-19 has therefore accelerated the demand for nebulizers, as it is essentially a respiratory disease. As this disease impairs breathing, the increasing number of COVID cases has led to the rapid procurement of nebulizers, globally. 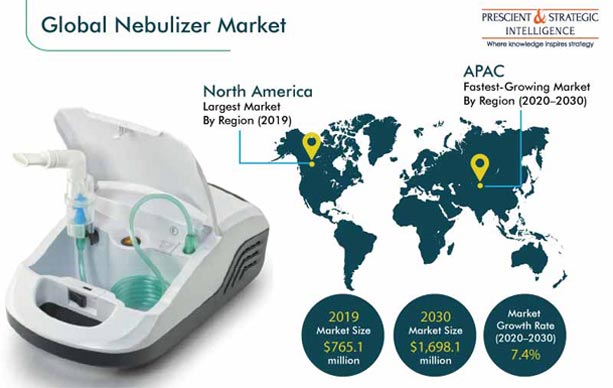 The pneumatic nebulizer category of the product type segment generates the highest revenue presently, as pneumatic nebulizers are durable and offer a range of particle sizes, with no medication limitations. As a result, these variants are popular among patients, primarily the elderly.

The portable nebulizer category will register the faster growth within the portability segment in the coming years. This will be due to the burgeoning geriatric population and its mounting demand for convenient treatment. The World Population Ageing 2019 report by the United Nations (UN) estimates that the population of people aged 65 years or above will rise from 703 million in 2019 to 1.5 billion by 2050.

The asthma category, in the application segment, held the largest share in the nebulizer market in 2019 due to the surging number of asthma cases. According to the World Health Organization (WHO), more than 339 million people are presently suffering from asthma, and it is the most-common chronic ailment among children.

The hospitals and ASCs category, within the end user segment, dominates the market for nebulizers, and the trend is expected to continue during 2020–2030. This can be owed to the greater footfall of patients at these healthcare units and easy accessibility of hospitals to people of all income levels.

North America generated the highest revenue from the sale of nebulizers in 2019 due to the high prevalence of respiratory diseases, product launches, and huge healthcare expenditure in the region. For instance, Koninklijke Philips N.V. announced the launch of InnoSpire Go for the U.S. market in October 2018. It is a small, easy-to-use, and lightweight portable handled nebulizer system, which is designed to deliver the medication quickly, thereby reducing the treatment time.

The APAC region is expected to record the fastest growth in the nebulizer market till 2030 due to the mounting demand for generic nebulized drugs, soaring number of tobacco smokers, increasing healthcare spending, and rising air pollution levels. Countries such as China, Japan, and India have a large number of cigarette users, which has led to a substantial rise in the cases of respiratory diseases. Owing to these reasons, the requirement for nebulizers will accelerate in the coming years. 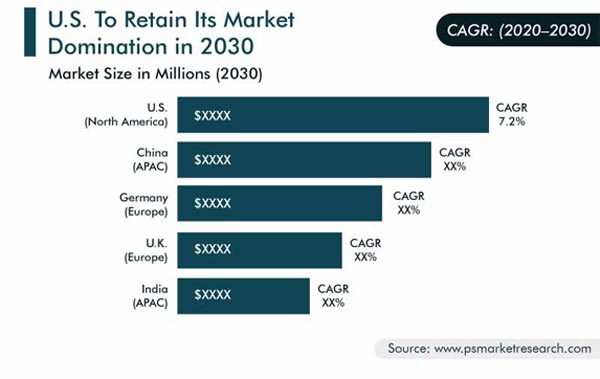 Collaborations among Players Trending in Market

Companies in the nebulizer industry are collaborating with each other to develop advanced products. For example, in March 2020, Ventec Life Systems Inc. and General Motors Company collaborated with a U.S.-based private-sector organization, StopTheSpread.org, to amplify the production of respiratory care products to combat the coronavirus spread.

The WHO estimates that more than three million people die of chronic obstructive pulmonary disease (COPD) each year, thereby accounting for nearly 6% of the global deaths. The organization also mentions that 90% of the COPD deaths occur in low- and middle-income countries. Nebulizers are required to treat these patients; hence, a large number of respiratory disorder cases are driving nebulizer market, by leading to the rising procurement of such medical devices by healthcare centers and individuals. 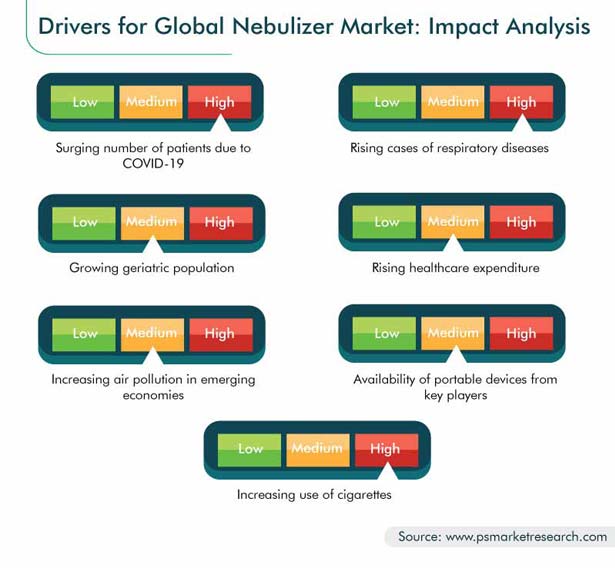 According to the World Population Ageing 2019 report, the APAC region is home to the largest number of older people in the world. In APAC, there were 395.3 million elderly people in 2019, and their number is expected to increase to 954.7 million by 2050. Aging is a common risk factor for pulmonary diseases, which require nebulization therapy.

The increasing healthcare expenditure is playing a vital role in the growth of the market for nebulizers. A 2019 report by the WHO revealed a rapid surge in the worldwide health spending, which was primarily noticeable in low- and middle-income countries, where it has been growing at a higher average rate than in high-income nations. Furthermore, the World Bank reveals that the healthcare expenditure increased from 9.04% of the world’s gross domestic product (GDP) in 2007 to 9.89% of the global GDP in 2017. The rising healthcare spending enhances the purchasing power and expenditure on healthcare of an individual, which, in turn, drives nebulizer sales.

The global nebulizer market is highly competitive in nature, with the giant players involved in launching new products, along with various public awareness programs, in order to enhance their portfolio and brand image. Additionally, smaller players are strengthening their finances and exploring new avenues to establish themselves in the market.

Similarly, in March 2018, Convexity Scientific Inc. launched its Flyp nebulizer for patients with asthma and COPD. It includes a vibrating internal disk that produces an inhalable aerosol mist, to deliver medication deep into the patients’ lungs. As per the company, the device is powered by a rechargeable lithium-ion battery, and it can deliver 10 treatments on a single charge.

Key Players in Nebulizer Market include:

The nebulizer market report offers comprehensive market segmentation analysis along with market estimation for the period 2014–2030.

Frequently Asked Questions About This Report
Which factors are helping in the growing demand for nebulizers, globally?+

The surging number of COVID-19 patients, rising cases of other respiratory diseases, increasing air pollution in emerging economies, growing geriatric population, rising healthcare expenditure, availability of the portable devices of the key players, and increasing use of cigarettes are some of the key factors driving the growth of the global nebulizer market.

In the current age, which “product” category holds the largest share in the nebulizer industry and why?+

Pneumatic nebulizers dominate the global market in the current scenario, owing to the increasing cases of respiratory diseases and growing geriatric population.

Why is North America the largest market for nebulizers?+

The growth of the North American market can be attributed to various factors, including the increasing cases of respiratory diseases and launch of new products by the key players.

Which “product” categories are covered in the nebulizer market report?+

Pneumatic, ultrasonic, and mesh nebulizers are covered in the report.