In this regard, the global medical equipment market is growing due to the rising geriatric population and increasing incidence of preterm births. In addition, the changing lifestyle, increasing healthcare expenditure, and rising prevalence of tobacco smoking are driving this growth.

Moreover, the pandemic brought on a rapid increase in the worldwide demand for medical equipment, such as ventilators and other vitals monitors. During the peak of the infection, devices needed to be customized in order to treat seriously ill patients. For instance, to provide patients with long-term ventilation, it became essential to provide portable anesthesia machines and portable ventilators.

Therefore, the ventilators and capnography equipment market was positively impacted by the pandemic, as capnography machines proved effective in evaluating the breathing of patients with COVID-19. The pandemic presented substantial challenges and opportunities for researchers, manufacturers, and marketers of non-invasive monitoring devices, including capnography systems. 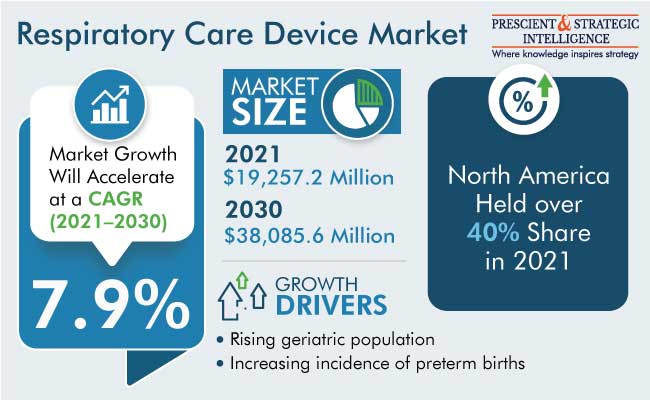 Thus, manufacturers and research institutions invested heavily in the development of new products during the COVID-19 pandemic, in order to meet the rising demand. For instance, several medical device manufacturing companies launched remote patient care systems, to assist healthcare departments and governments in fighting the pandemic.

In 2021, North America accounted for the largest share, of more than 40%, of the global revenue, with the rising incidence of respiration-related disorders driving the equipment demand. For instance, according to the CDC, more than 15.0 million Americans had COPD in 2021.

Furthermore, over 480,000 deaths in the U.S. occur each year as a result of smoking cigarettes, according to data released by the CDC in June 2021. Out of these, 41,000 deaths are caused by exposure to second-hand smoke. Moreover, an increase in the number of surgeries and breathing assistance procedures in the U.S., as a result of its aging population, will help the sector develop more.

Moreover, it is expected that as technology develops, the demand for therapeutic respiratory devices would rise. Further, manufacturers' involvement in patient care innovation, including the introduction of enhanced patient monitors, novel metrics, wireless machines, procedures, and integrated IT solutions, is escalating the demand. These innovations have enabled various anesthesiologists and physicians to offer individualized services to patients. 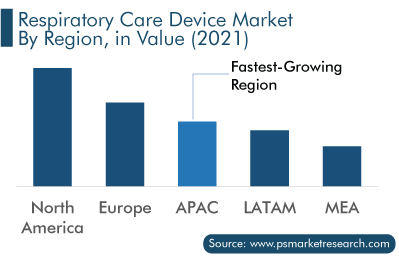 Urbanization has significantly changed the lifestyle and the environment. According to the WHO, in the 21st century, cities are home to over 55% of the world’s population, and this number is expected to increase to 68% by 2050. As a downside, the rapid urbanization of the environment and lifestyle has significantly threatened the health of individuals.

As per the WHO report published in 2021, outdoor air pollution in cities and rural areas causes over 4 million premature deaths worldwide each year. The fine particulates emitted by the burning of fuel inside motor vehicles, domestic appliances, and industrial machinery are responsible for a range of cardiovascular conditions, cancers, and respiratory diseases. Moreover, the climate change due to air pollution is having a considerable effect on health.

In addition, the urban lifestyle is mostly sedentary, encourages the consumption of food with less nutritional benefits, and often leads to an absence of physical exercise. This can result in lower-quality pulmonary function, which further increases the chance of early mortality.

According to the WHO estimates, more than 55% of the outdoor air pollution-related premature deaths are due to ischemic heart disease and strokes, a little over 5% due to lung cancer, and slightly under 20% due to chronic obstructive pulmonary disease or acute lower breathing infections. Thus, the rapid urbanization and increasing pollution level drive the prevalence of long-term diseases, which leads to an increase in the demand for respiratory care devices.

In 2021, therapeutic devices accounted for the largest share, of over 60%, of the global revenue.

The rising prevalence of respiratory disorders is the major driver for the category’s growth, with the increase in the number of operations propelling the demand for advanced therapeutic devices. For instance, more than 65 million people across the world have moderate-to-severe COPD, which makes breathing difficult, thus driving the demand for ventilators. 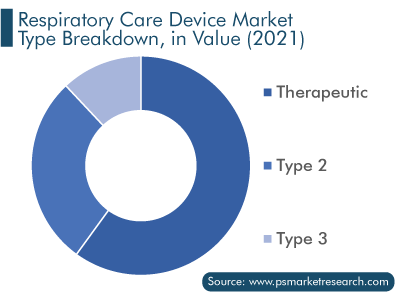 ‘Preterm birth’ refers to babies born within 37 weeks of pregnancy. It is the major reason for infant death, with most preterm deaths occurring among babies who were born very preterm. These babies are prone to serious illnesses and death during the neonatal period itself, due to their impaired respiration, poor body temperature regulation, high risk of infection, and difficulty in feeding.

Africa and South Asia account for over 60% of the preterm births, according to the WHO, as per which, every year, approximately 15 million babies are born preterm. Similarly, in 184 countries, the rate of preterm births ranges from 5% to 18% of the babies born. According to the CDC, in the U.S., preterm births affected about 1 of every 10 infants born in 2020.

Babies who survive may need to spend weeks or months in a neonatal intensive care unit and may face lifelong breathing problems, intellectual disabilities, impaired vision, hearing loss, and cerebral palsy. Thus, for the survival of preterm babies, the demand for respiratory care devices would increase globally.

Tobacco use is one of the leading risks for mortality in the world due to long-term illnesses, such as cancer, lung diseases, and cardiovascular diseases. As per the WHO, every year, smoking is estimated to cause about 71% of the lung cancer, 42% of the COPD, and nearly 10% of the CVD cases. Moreover, 80% of the smokers worldwide live in low- and middle-income countries, leading to a high burden of tobacco-related illnesses and death here.

Globally, the rate of tobacco usage and associated mortality are higher in men than women. Furthermore, in 2020, 22.3% of the global population used tobacco, including 36.7% of all the men and 7.8% of the world’s women. Passive smoking is also one of the causes of respiratory tract disturbance.

More than 8 million people lose their lives due to tobacco consumption each year. Of these, 7 million deaths are the result of direct tobacco use, while around 1.2 million are the result of non-smokers being exposed to second-hand smoke. In order to detect and treat diseases attributed to the usage of tobacco, the usage of respiratory care devices continues to rise.

With this, the inhalers category is projected to witness the highest CAGR, of XX%, amongst therapeutic devices. Inhalers are furthered categorized as metered-dose inhalers (MDIs) and dry-powder inhalers (DPIs). The high incidence of asthma is a key factor that will drive the growth of the global inhalers market in the forecast period.

Frequently Asked Questions About This Report
What will be the size of the respiratory care devices market in 2030?+

What is the COVID-19 impact on the respiratory care devices industry?+

Which is the widest-selling product type in the respiratory care devices market?+

What are the latest strategies of respiratory care devices market players?+

Players in the market for respiratory care devices have augmented their production capacity and invested in portable ventilators and anesthesia stations.