The global micromobility telematics market was valued at $957.7 million in 2020, which is expected to grow at a CAGR of 26.7% during the forecast period (2021–2030). This can be mainly ascribed to the vast adoption of micromobility on the global level, which is driving the demand for these systems. With the rapid integration of network services, locking mechanism, smartphone connectivity, and fleet optimization into such services, the market is expected to advance rapidly.

Before the COVID-19 was declared a pandemic, 2020 was proving to be a crucial year for the market, with several industry players preparing for new product and service offerings and capacity expansions. However, with the outbreak, in 2020, the market started to go downhill. Globally, countries went into a complete lockdown to contain the spread of the coronavirus. This, in turn, has derailed the growth of various sectors, including the automotive industry, as the shutting down of vehicle and auto parts manufacturing facilities disrupted the supply chain. 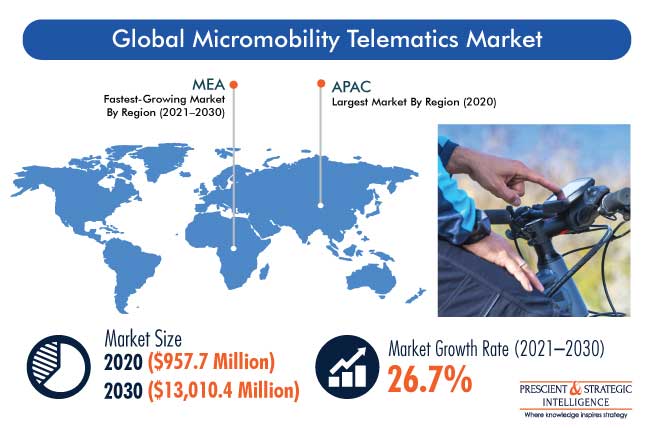 The bike sharing category in service type segment dominated the micromobility telematics market in 2020, owing to the growing awareness about the environment. Moreover, the rising demand for first- and last-mile mobility solutions has been driving the popularity of bike sharing services, in turn, the integration of telematics solutions.

With the rise in the popularity of micromobility, more-intelligent software is being developed by market players. Thus, the software category under offering segment is expected to witness the fastest growth in the market during the forecast period. In addition, the software mainly includes operating systems (OS), device drivers, voice recognition capabilities, and application programming interfaces (API), for providing connectivity, mapping, and safety and security solutions.

Globally, APAC held the largest share in the micromobility telematics market in the year 2020. In APAC, the high investments and establishment of technology start-ups are adding to the growth of the market. The players are focusing on providing low-cost micromobility services to gain the first-mover advantage. Moreover, the changing customer preference with regard to the daily urban commute is driving the demand for fleet telematics, connected vehicle technologies, and safety features in vehicles, which is expected to propel the regional market in the coming years. 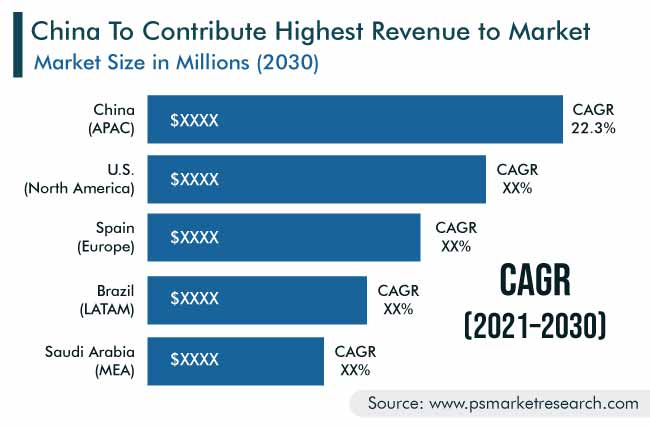 The recent trend in the micromobility telematics market has been the inflow of heavy investments. The major players, along with numerous start-up companies in the industry, are receiving funds from several venture capitalists. For instance, till date, VULOG SA has received a total funding of $31 million, of which the last round of funding, of $20 million, took place in August 2017. The company’s major investors include Frog Capital, ETF Partners, Ecotechnologies Fund, Inven Capital, and Bpifrance. These funds are being used by the players to expand their presence around the world and upgrade their product and service offerings.

Micromobility services play a pivotal role in bridging the gap in first- and last-mile transportation, by offering mobility options for shorter distances, which is a key driving factor for the growth of the market. These services are usually used to cover a distance of less than 5 km (3.1 miles) per trip. Moreover, these services are mostly offered via the dock-less or station-less model, which allows users to drop off the vehicle at any place as per their convenience, which is further assisting in first- and last-mile traveling.

For instance, in 2018, European investors Index Ventures and Atomico massively funded two of the top U.S. electric kick scooter sharing companies, namely Bird Rides Inc. and Neutron Holdings Inc. (Lime), respectively. Index Ventures headed Bird’s Series B round with an investment of $100 million. Thus, the incoming of investments in the micromobility market is boosting the market, by raising the demand for telematics solutions.

Market Players Are Engaging in Mergers, Acquisitions and Partnerships to Gain Competitive Edge

In recent years, players in the global micromobility telematics market have been actively involved in mergers and acquisitions and strategic partnerships to stay ahead in the competition.

Based on Sharing Type

Frequently Asked Questions About This Report
What is the micromobility telematics market growth forecast?+

Which is the most-popular technology in the micromobility telematics industry?+

Which region will offer the best opportunities for micromobility telematics market players?+

What is the most-widely sold offering in the micromobility telematics industry?+

The micromobility telematics industry is currently witnessing the highest demand for GPS.

Which strategic move characterises the competition in the micromobility telematics market?+

The micromobility telematics market competitive landscape is presently being shaped by mergers, acquisitions, and product launches.