The Latin American (LATAM) fracture management market size stood at $592.0 million in 2019, and it is expected to reach $1,002.9 million by 2030, advancing at a CAGR of 5.1% during the forecast period (2020–2030). The growth of the market is mainly attributed to the high prevalence of osteoporosis in the region, surging geriatric population, high incidence of road accidents, and rising number of hip and knee replacement surgeries. 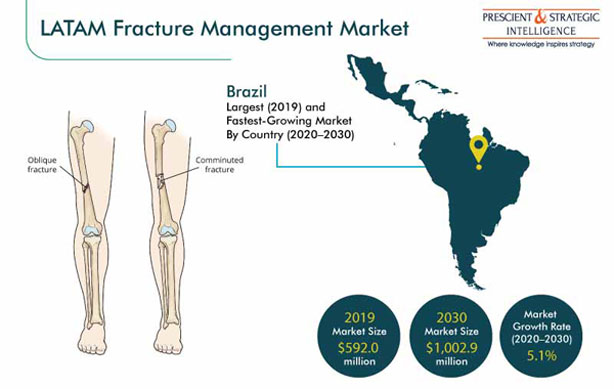 The ongoing COVID-19 pandemic has decreased the demand from end users and reduced the production of these products, mainly due to the smaller workforces with manufacturing firms, government mandates for lockdowns, and lower-scale movement of people and goods across the region.

Based on type, the internal category is expected to witness the faster growth in the regional fracture management market during the forecast period. This would mainly be due to the high incidence of severe bone fractures and road injuries. Moreover, the significantly higher cost of internal fracture management products, such as plates and screws, supports the category’s domination on the regional market.

On the basis of material, the metallic category occupied the largest share in 2019 in the regional fracture management market. This was mainly owing to the fact that screws, plating systems, hip plates, and other plating system accessories are majorly made of stainless steel or surgical steel or other metals. Owing to their high importance in the management of fractures, as they return the lost rigidness and physical strength to the body, they cost more as compared to non-metallic devices.

Based on gender, the men category generated the higher revenue for the LATAM fracture management market players in 2019. The category is further expected to continue the trend during the forecast period, owing to the growing number of males in the region coming in with serious road accident injuries.

Among all the end users, hospitals dominate the regional fracture management market, and this category is also expected to witness the highest growth rate during the forecast period. It is majorly due to the fact that trauma management facilities are best provided at hospitals, as these places have a 24/7 availability of staff and the medical devices that are required to treat such patients.

Regionally, Brazil contributed the highest revenue to the LATAM fracture management market in 2019, and it is also projected to witness the fastest growth during the forecast period. The growing geriatric population and rising number of osteoporosis and other orthopedic disease cases are the major factors behind the dominance of the country on the industry. 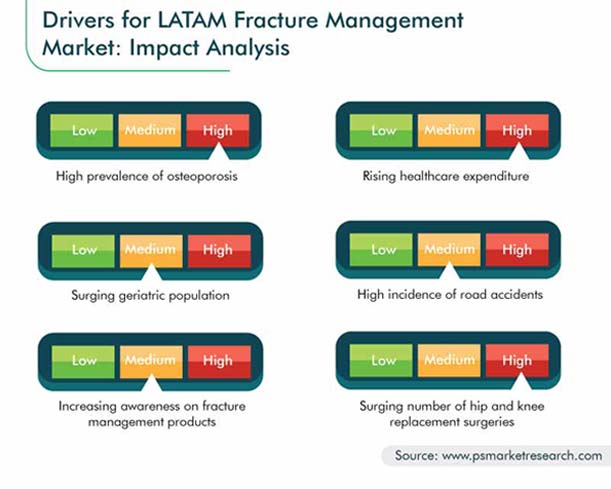 Penetration of Advanced Products Is Key Trend in Market

The use of bioabsorbable implants in surgical procedures is gaining traction in the fracture management market, with an increasing focus on the adoption of technologically advanced healthcare products. Advancements in polymer science have led to the production of implants with the mechanical strength necessary for such procedures.

Moreover, market players in the region are focusing on leveraging advanced technologies, such as artificial intelligence (AI) and cast bracing, in fracture management products. For instance, Ottobock SE & Co. KGaA introduced C-Leg, a leg prosthesis, and Bebionic hand, a hand prosthesis, which can be controlled by microprocessors. 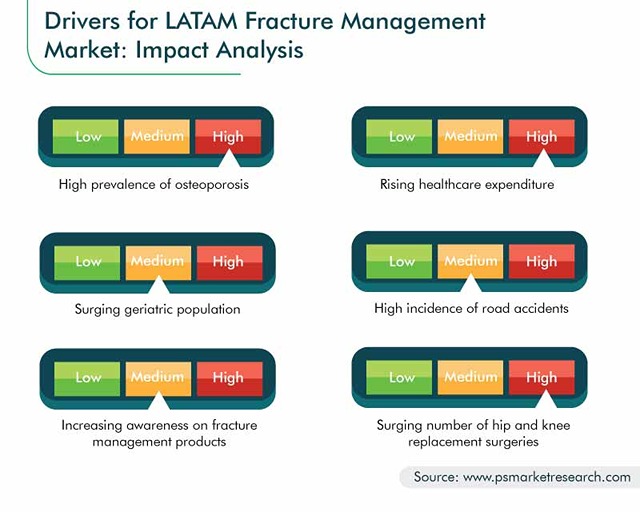 The high risk of fractures has been viewed as a serious concern among the elderly. As people grow older, their bones’ mineral density decreases. This is particularly problematic in post-menopausal women. When combined with the prevalent issues of unsteady balance and vision problems among older people, the risk of fractures further increases in this section of the population. Moreover, the reduced bone mass in old age increases the risk of osteoporosis. Thus, the demand for fracture management products is substantially high among the geriatric population in the region.

Mergers and Acquisitions Are Strongest Measures Taken by Market Players

The LATAM fracture management market comprises many giant players, who are involved in mergers and acquisitions in order to enhance their market position. For instance, in July 2018, CNF Medical, a subsidiary of Carolina Narrow Fabric Company, acquired the splinting and casting assets of Parker Medical Associates of Charlotte. Similarly, in June 2020, Össur hf closed the acquisition of College Park Industries, which provides prosthetic devices and supporting services.

Frequently Asked Questions About This Report
What will be the growth rate of the Latin American fracture management market during 2020–2030?+

The Latin American fracture management market is expected to grow at a CAGR of 5.1% during 2020–2030.

Why do men generate the higher revenue for the Latin American fracture management market?+

Which disease is driving the growth of the Latin American fracture management industry?+

What is the impact of COVID-19 on the Latin American fracture management industry?+

Which countries are covered in the Latin American fracture management market report?+