The Indian end-of-life vehicle (ELV) and dismantling market valued $3,474.0 million in 2019, and it is expected to advance at a CAGR of 17.2% during the forecast period (2020–2030). The key drivers for the market are the rapid closure of unregulated scrap yards, recent laws related to vehicle life, and supportive government policies. 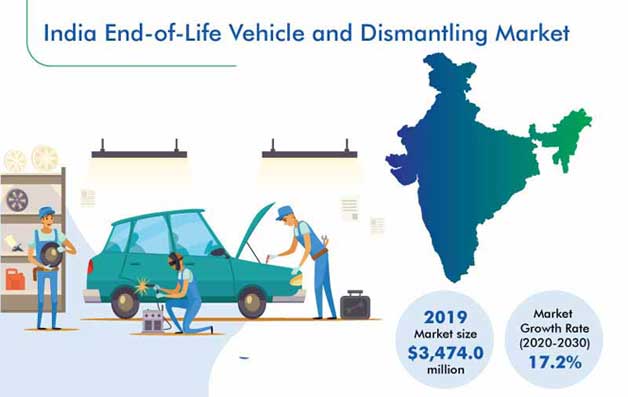 The diesel category, under segmentation by fuel, is expected to continue dominating the Indian end-of-life vehicle and dismantling market till 2030, on account of the fact that a large number of passenger vehicles and most of the commercial vehicles, including heavy-duty variants, use diesel.

During the forecast period, the electronic and electrical equipment classification, based on component, would grow the fastest in the market. This is attributed to the rapid integration of autonomous features in vehicles. Moreover, the demand for shared mobility services, such as taxi and cab services, is rising, and the vehicles deployed for these purposes consist of a large number of electrical and electronic components.

The unorganized bifurcation held larger share in the Indian end-of-life vehicle and dismantling market, on the basis of sector, in 2019, owing to the lack of regulatory policies, which have helped unorganized players prosper. Vehicle dismantling in India is majorly handled by thousands of small local players, as the market is still in its primitive stage.

In the coming years, the highest CAGR in the market, under the vehicle segment, would be witnessed by the four-wheeler division. This is attributed to the rapid uptake of such passenger and commercial vehicles, as a result of economic growth and the surging disposable income of people. Additionally, with the rising popularity of ride-hailing services, the demand for four-wheelers will increase further, thus driving the advance of this category.

During the historical period (2014–2019), Maharashtra was the highest-revenue-generating state in the Indian end-of-life vehicle and dismantling market, as this state has the highest gross domestic product (GDP) in the country; therefore; people here have a higher purchasing power than in other states.

Modern Dismantling Techniques Are Trending in the Market

Currently, the Indian end-of-life vehicle and dismantling market is dominated by unorganized players, who use primitive techniques to accomplish the process. But, seeing the increasing demand for salvaged automobile components, major automakers, including Maruti Suzuki India Limited, Mahindra & Mahindra Ltd., and Toyota Kirloskar Motor, have started investing in advanced technologies, which can help in the dismantling of automobiles in a cost-effective and environment-friendly way.

The primary factor driving the growth of the Indian end-of-life vehicle and dismantling market is the increasing number of favorable policies being implemented by the government. Numerous state governments, along with the Ministry of Steel, Ministry of Road Transport and Highways (MoRTH), and Ministry of Heavy Industries & Public Enterprise, have initiated the policy formulating process for the setting up of scrap yards, so that the transition can be made from conventional automobiles to eco-friendly variants. Further, these government bodies are displaying a strong commitment to good manufacturing practices (GMPs), by pushing the adoption of state-of-the-art, environment-friendly technologies. As ferrous scrap is the main raw material for electric arc furnace (EAF)-/induction furnace (IF)-based steel, metal scrapping centers are being promoted throughout the country. The framework being formulated for the same would include guidelines for collecting, dismantling, and shredding vehicles in a safe, organized, and eco-friendly manner. 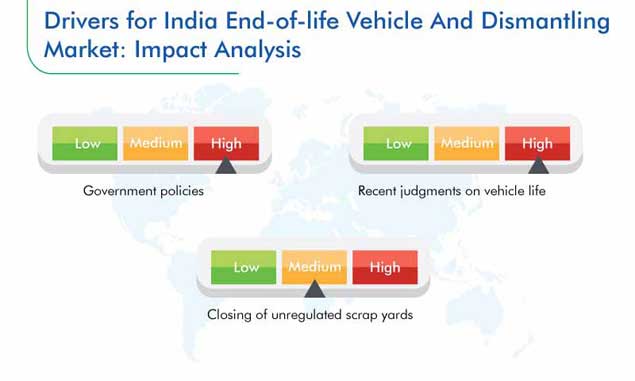 High Number of ELVs Creates Vast Opportunities for the Market

While in developed countries the vehicle scrapping sector has grown in tandem with the automobile industry, the scenario in India has been completely opposite. Despite the rapid expansion in the country’s automotive domain, the advancements in the vehicle recycling and salvaging sector have been quite unyielding. This has resulted in a high number of ELVs, which have the potential to offer the Indian end-of-life vehicle and dismantling market vast growth opportunities in the coming years.

To take advantage of the vast growth potential of the Indian end-of-life vehicle and dismantling market, several organized companies are constructing recycling facilities.

For instance, in November 2019, Mahindra and Mahindra’s steel processing subsidiary, Mahindra Accelo, set up a scrapping unit, named Cero, in Greater Noida, as a joint venture with Metal Scrap Trade Corporation Limited (MSTC). Mahindra aims to establish 25 more such facilities across the country in the next three years and project itself as a leader in the Indian automobile recycling domain.

The Indian end-of-life vehicle and dismantling market report offers comprehensive market segmentation analysis along with market estimation for the period 2014–2030.