The Indian electric scooter and motorcycle market size stood at USD 893 million in 2022, and it is expected to advance at a compound annual growth rate of 27.30% during 2022–2030, to reach USD 6,161 million by 2030. This is due to the growing need for energy-efficient commutes, favorable government policies, rising demand for zero-emission vehicles, and increasing fuel prices, which have compelled two-wheeler manufacturers to explore alternative power sources for their two-wheeled models.

The requirement for cost-efficient two-wheelers is also driven by the increasing ICE vehicle prices due to BS 6 implementation and the low maintenance cost of EVs. In addition, to regulate the pollution by vehicles, central, state, and local authorities have taken several initiatives in the recent past, such as purchase rebates, tax exemptions, and financial incentives for the buyers of EVs. The rising government focus on curbing pollution levels in the country promises a regulatory push for electric two-wheelers.

About 20% of the CO2 emissions and 30% of the particulate emissions in India are caused by scooters and motorcycles. The recent government guidelines have taken into regard the need to electrify the two-wheeler fleet. For this, in 2019, the national government proposed a plan to make the sale of all two-wheelers up to 150 cc electric by March 2025. 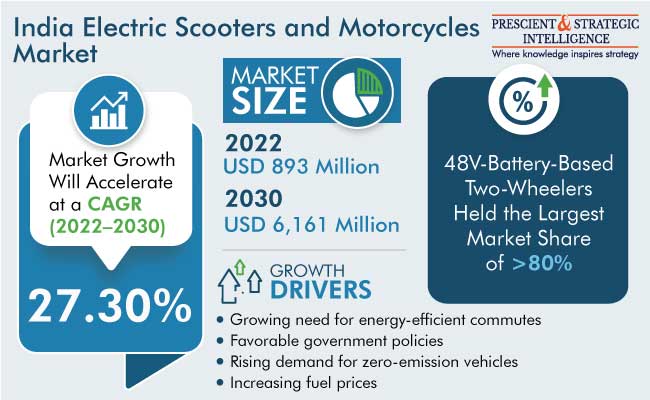 Electric vehicle adoption in India over the next few years is going to be largely driven by two- and three-wheelers. Particularly, the expected surge in the demand for high-speed electric scooters and motorcycles and rise in their retail prices will propel the market value in India during the forecast period.

The FAME-II scheme links the demand incentive to the size of the battery, with the government providing INR 10,000 per kWh of battery for a two-wheeler. Moreover, as per the Ministry of Heavy Industries and Public Enterprises, after the modification of the FAME-II scheme in June 2021, the demand for electric two-wheelers has risen to over 5,000 units per week from 700 units per week before the modification.

The lower battery cost reduced the GST rate, which, combined with the FAME-II demand incentives, is expected to further lower the cost of ownership and, hence, the viability of EVs.

Vehicles Equipped with Lithium-Ion Batteries Are Generating Most Demand

Batteries account for 50%–60% of the total cost of EVs. Moreover, the prices of Li-ion batteries have fallen sharply over the last 10 years, at a rate of around ~30% annually. The fall will continue at a rate of around 10% annually over the next few years, which will make these automobiles increasingly cheaper for the masses. Moreover, the incentives provided under the FAME-II scheme would further make these automobiles viable for the common folk.

Electric scooters, especially medium-speed (40–80 km/h) models, will dominate the market in the coming years. The availability of a considerable number of electric scooter models in this speed range, their low cost, as well as their viability in place of the conventional gasoline-driven mopeds are fueling their sales in India.

Moreover, manufacturers are expected to launch various electric motorcycle models in the country in the coming years, thus benefiting the market in the motorcycles category during the forecast period.

48V batteries are the most-commonly used power source in this market, holding an over 80% share in 2022. Scooters with 48V batteries are a reasonable buy in terms of cost-effectiveness, range, and safety, which is why the category will remain dominant during the forecast period.

Moreover, with the increasing demand for higher speeds and longer driving ranges, the share of electric two-wheelers with 60V batteries is expected to rise in the next few years. 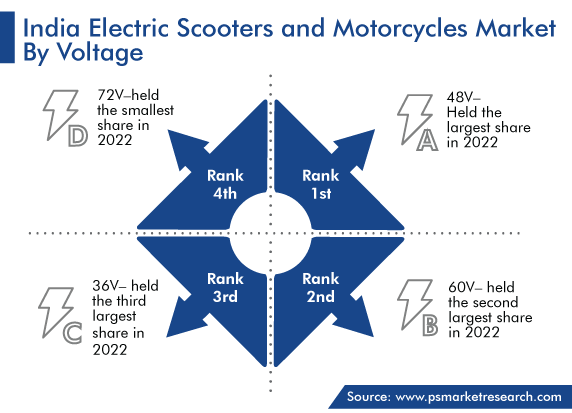 Since 2017, the market share of removable-battery-based electric scooters has increased significantly. Due to the lack of charging infrastructure and range anxiety among customers, removable batteries have emerged as a solution. People can simply detach the battery from their vehicle, carry it along, and connect it to a regular domestic electricity socket. Hence, the technology is expected to have a significant impact on the market and double the speed of vehicle electrification in the country.

More than 2 million petrol-run scooters and motorcycles are engaged in courier services, plying for multiple hours every day. Moreover, the large number of food and beverage store openings across the major tier-1 and tier-2 cities has increased the demand for two-wheeler fleets for delivery. This has provided an opportunity to the major OEMs to convince last-mile delivery firms to replace their old vehicle models with cost-effective, low-maintenance, and environment-friendly alternatives.

Uttar Pradesh Is Largest Buyer of Battery Two-Wheelers in India

Uttar Pradesh is the largest two-wheeler market in India, with the penetration of electric variants also continuously increasing in the state. The requirement for these vehicles from the major tier-2 and tier-3 cities is increasing. In addition, owing to the high growth potential in this state, the major OEMs’ focus on increasing their share, by expanding their dealer network, is benefiting this domain. As per The Times of India, Uttar Pradesh has 255,700 electric vehicles registered, the highest of any state.

The Indian government is supporting the electric vehicle industry by offering subsidies on the purchase of such automobiles. These subsidies have essentially made battery-powered scooters and motorcycles more viable for the customer. Some of the supportive initiatives are tax exemptions, purchase rebates, and financial incentives to the buyers of EVs.

Furthermore, the Ministry of Road Transport and Highways (MoRTH), under the National Mission for Transformative Mobility and Battery Storage, has formulated an action plan to promote electric two- and three-wheelers. The government body has also proposed to ban all ICE variants in India, starting in 2025 for two-wheelers and in 2023 for three-wheelers. Moreover, the increasingly stringent emission norms are expected to boost the sales of these scooters and motorcycles during the forecast period.

Based on Maximum Speed

Frequently Asked Questions About This Report
What will be the size of the India electric scooter and motorcycle market in 2030?+

In 2030, the electric scooter and motorcycle market of India will generate USD 6,161 million.

Which product has more demand in the India electric scooter and motorcycle industry?+

Which state is leading the India electric scooter and motorcycle market?+

The electric scooter and motorcycle market in India is dominated by Uttar Pradesh.

What are the key drivers for the India electric scooter and motorcycle industry?+

The India electric scooter and motorcycle industry is driven by the rising environmental concerns and government support for EVs.

Which is the major application in the India electric scooter and motorcycle market?+

Last-mile logistics is a major B2B application in the electric scooter and motorcycle market of India.