The Central European heavy ground transportation vehicles market, which includes trucks and buses, was valued at $42.9 billion in 2021. This number is expected to reach $66.6 billion by 2030, with a CAGR of 5.0% during 2021–2030. The key factors driving the market are an increase in trade activities and rapid urbanization, which drive the demand for road freight transportation and logistics, along with the innovations in technologies. 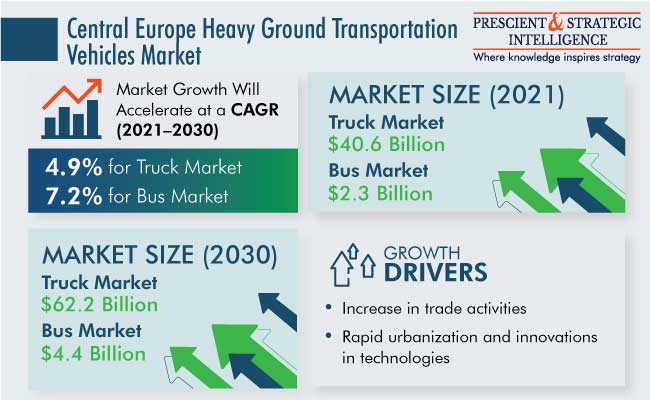 Trade requires efficient goods transportation solutions, which boosts the growth of the market in Central Europe. Moreover, the market is strengthened by the numerous trade agreements between neighboring countries. For instance, in 2019, Austria was the number 27 economy in the world in terms of GDP, number 31 in total exports, and number 28 in total imports. Austria exports specialized industrial machinery, pharmaceuticals, glassware, power machinery, and food products mainly to Germany, Italy, Switzerland, and France by means of ground transportation, thereby supporting the growth of the industry.

Truck sales generate the majority of the revenue in Central Europe due to the strengthening focus on electric transmission. Regional countries are trying to reduce their emission of greenhouse gases (GHGs), especially from road transportation, and oil dependence. Companies including AB Volvo and Mercedes-Benz Group AG are spending more on R&D so they can innovate transport for the cities of tomorrow. Autonomous driving, electromobility, and connected vehicles will lead to quieter, cleaner, and safer roads, thus allowing megacities to grow. Countries such as Austria, the Czech Republic, Hungary, Poland, and Switzerland are adopting electric light and heavy trucks to reduce CO2 emissions. For instance, in Switzerland, the number of electric trucks sold was 50 in 2020, compared to 13 in 2019, as per the European Automobile Manufacturers Association (ACEA). 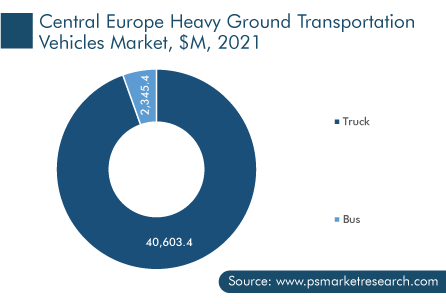 LCV Trucks Are More in Demand

LCV trucks held the larger revenue share, of over 80%, in the Central European truck market in 2021. This category is also expected to grow with the higher CAGR during the forecast period (2022–2030). Light trucks are more in demand due to their lower price, which makes them affordable for small-to-mid-sized enterprises. Moreover, the growing need for last-mile delivery services is expected to drive the growth of the market in this category in the region during the forecast period.

Conventional (diesel) variants held more than value 90% share in the Central European truck market in 2021. This was primarily due to the low prices of these trucks, along with a minimal aftermarket service requirement. Hybrid and electric vehicles are expensive compared to conventional ones, which is why truck owners prefer those with conventional powertrains.

However, now, the Central European market for electric trucks is growing with a healthy rate owing to the stringent government regulations for the reduction of carbon emissions, growing number of electric truck manufacturers in the region, including many that have majorly offered conventional, diesel-based variants till now. Many companies from overseas have also launched electric trucks, anticipating the growing demand for them in the region. The pilot e-truck projects by OEMs have also helped boost the adoption of these vehicles in the region. 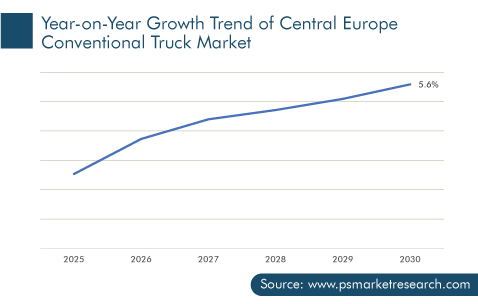 Poland generates the highest revenue in the Central European truck market. With a population of 38.0 million, Poland is the largest consumer market in Central Europe and the sixth-largest economy of the EU. Poland’s exports and imports were both valued at $345.2 billion in 2019. Poland’s chief export partners in terms of the value of the exported goods are Germany (27.5%), the U.K. (6.0%), the Czech Republic (6.1%), France (5.8%), and Italy (4.6%). Hence, the significance of the Polish market goes well beyond its borders. For the international trade of commodities, different means of transportation are required, which boosts the ground transport machinery market.

Compared to the truck market, the bus market is relatively small in the central part of Europe; therefore, OEMs have lucrative opportunities here. Bus sales in the region are mainly driven by the increase in the need for public transportation. Moreover, the surging demand for clean buses and government initiatives to promote public transportation are predicted to positively influence the Central European bus market during the forecast period. The prevailing concerns over the pollution caused by automobiles have forced governments to take initiatives to reduce the levels. For instance, in February 2019, the European Union (EU) adopted a new rule to make 25% of all European buses electric or hybrid by 2025. Secondly, regional governments are taking initiatives to improve the public transportation system.

Single-decker buses are expected to progress with an around 8% CAGR during 2021–2030, in terms of value. Schools, colleges, universities and other academic institutions, and public transport agencies continue to procure these variants in high numbers to suffice the demand for daily commute.

The transit buses category dominated the Central European bus market with around value 50% share in 2021. These buses improve social inclusion, providing access to education, employment, and healthcare to all, including those on low incomes, those who do not drive, the older generation, people with disabilities, and people living in remote areas. Buses are the most-widely used form of public transport in the region and thus, a vital contributor to tourism. Moreover, there are 58 bus assembly plants in Europe and 692,207 buses on the EU’s roads as of 2020. Additionally, 30,570 European buses, worth $0.9 billion, were exported to other nations in 2020. 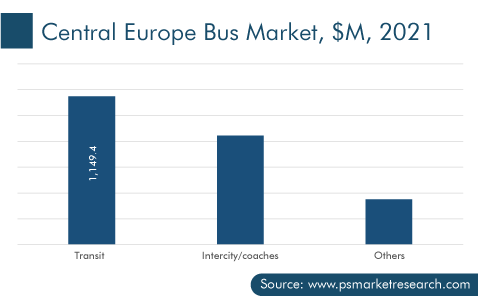 Poland is one of the largest conventional- and electric-bus-producing countries in Central Europe. The manufacturing of electric buses is growing with many companies, such as Germany’s MAN Truck & Bus, starting production here. This new investment of MAN has strongly enhanced Poland’s position in the zero-emission public transport segment. MAN Truck & Bus is also collaborating with Europe’s third-largest electric bus manufacturer, Solaris. About a third of all the electric buses in Europe are manufactured in Poland, led by Solaris Bus & Coach. Moreover, in the region, Poland has the highest number of passengers traveling by road, which is essentially propelling bus sales here.

Players in the heavy land transportation vehicles market have been launching new products and entering into strategic partnerships and collaborations to gain a competitive edge. For instance:

Frequently Asked Questions About This Report
What is the 2030 forecast for the Central European heavy ground transportation vehicles market?+

In 2030, the heavy ground transportation vehicles market in Central Europe is expected to generate $66.6 billion.

Which is the more-popular type in the Central European truck market?+

Which application generates the highest revenue in the Central European bus industry?+

The bus industry in Central Europe, under the application segment, has generated the highest revenue from the transit category.

What is the key driver for the Central European truck industry?+

The Central European truck industry is driven by the rising trade and construction activities.

What is the biggest strategic development in the Central European bus market?+

The players in the bus market of Central Europe are majorly engaging in product launches.