The Western European heavy ground transportation vehicles market size was $155.4 billion in 2021, which is expected to progress with a CAGR of 6.4% during 2021–2030. This can be ascribed to the rapid urbanization, innovations in automotive technologies, and increase in trade activities in the region. Additionally, the push for electrification and the evolution of digital technologies are creating new use cases, e.g., in the context of advanced truck and trailer telematics.

In 2020, zero-emission heavy-duty vehicles (HDVs) accounted for a mere 1% of the new registrations in Europe. The vast majority of these, 95%, were battery electric, with a limited presence of fuel-cell electric technologies. As a result, the European share in the global zero-emission HDV market in 2020 was just short of 3%. Zero-emission HDV uptake is expected to significantly increase over the next decade, driven by the EU-wide regulations regarding pollution reduction. Additionally, several companies in this region, such as AB Volvo, Mercedes-Benz Group AG, and Traton Group, are investing in R&D and launching new vehicles. 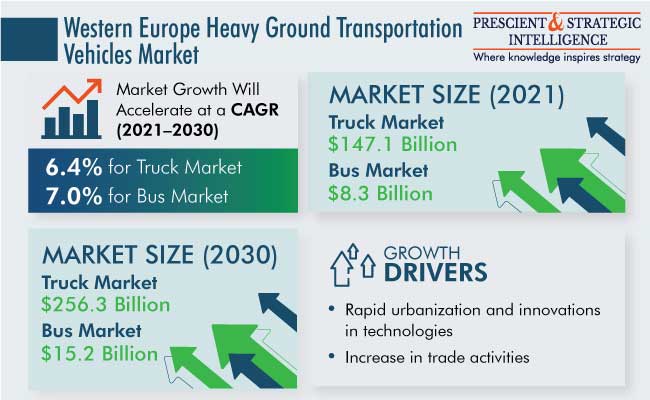 In addition, the European population is growing continuously, as is the number of passenger and commercial vehicles in use. For instance, with a population of 83.2 million, Germany is the largest consumer market in the EU. The significance of the German market goes well beyond its borders. An enormous volume of trade in Germany is conducted at some of the world’s largest trade events, such as Medica, Hannover Fair, Automechanika, and the Internationale Tourismus Börse (ITB) tourism Show. For these events, different means of transportation are required, which boosts the heavy ground transportation vehicles market growth prospects. 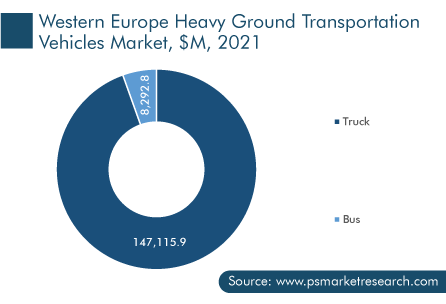 The bus market in the region generated over $8 billion in 2021. Growth in this sector is driven by the increasing middle-salary population. Moreover, companies’ spending on R&D, for the deployment of electric buses in the municipal fleets in Western European countries, has increased in the past few years. Governments are deeply concerned about the environment and are, therefore, aiding private fleet owners and public transport departments in adopting battery electric buses (BEBs), which are environment-friendly.

In Western Europe, France, the U.K., and Germany together account for more than half of the total number of electric buses.

The market for electric and hybrid buses in Western Europe is expected to grow rapidly during the forecast period (2022–2030), as they emit minimal levels of pollution. They also provide sustainable mobility options by reducing the reliance on fossil fuels. Furthermore, the European Commission’s Sustainable and Smart Mobility Strategy released in 2020 aims at 90% lower transport sector emissions by 2050. The adoption of this strategy will encourage public and private transit agencies to shun diesel buses in favor of electric and hybrid variants in the coming years. 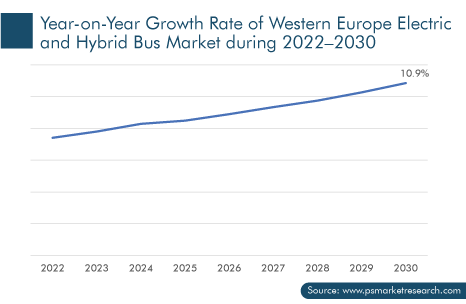 France accounted for the largest revenue share, of around 30%, in the Western European bus market in 2021. The country entices people of all ages with some of the world's most-iconic landmarks, world-class art and architecture, beautiful countryside, and a staggering amount of history, which promotes tourism in the country. Thus, tourists and daily commuters are the reason behind the growth of the bus market. Moreover, the government supports the manufacturing of electric vehicles and the setup of the required charging infrastructure, to further drive the adoption of electric mobility in the country.

As trade activities increase in the region, the demand for trucks will rise. Trade requires efficient goods transportation solutions, which boosts the growth of the truck market in Western Europe. Moreover, the market is strengthened by the trade agreements between neighboring countries. For instance, Germany shares a dual relation with France, as it is the former’s closest neighbor. Under this bilateral symmetrical relation, both the countries exchange their goods and services through different transportation means, such as trains and trucks, thereby supporting the growth of the market in the region.

In Western Europe, the demand for LCVs is expected to grow at the higher CAGR, of more than 6%, during 2021–2030. This can be ascribed to the higher productivity and a lower maintenance cost of LCVs than heavy-duty variants. Moreover, the emergence of intelligent transportation and logistics supports the adoption of light trucks. The demand for these trucks is also rising because of their low price, which makes them affordable for small-to-mid-sized enterprises in the region for last-mile deliveries.

The demand for trucks with automatic transmissions is increasing rapidly because they are easy to drive and more powerful than manual-transmission-based trucks. Automatic transmission requires a simpler system that allows the engine to operate at a slightly more-efficient rate, which leads to better use of the fuel and a higher mileage as a result. Moreover, the stringency in the emission standards for heavy-duty vehicles, such as Regulation (EU) 2019/1242, has shifted the focus of OEMs toward alternative powertrains for vehicles. Thus, commercial vehicle OEMs in the region are developing automatic-transmission-based trucks. 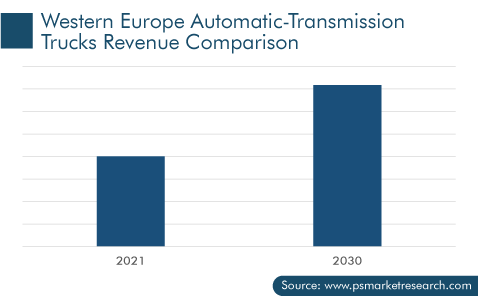 The increasing number of trade agreements, presence of established players and their active involvement in product launches, and rising R&D expenditure are some of the major factors making France the fastest-growing country in the Western European truck market.

Players in the Western European heavy land transportation vehicles market have been launching new products and entering into strategic partnerships and collaborations to gain a competitive edge. For instance:

Frequently Asked Questions About This Report
How much did the Western European heavy ground transportation vehicles market value in 2021?+

Which country is the largest contributor to the Western European bus industry?+

France is the largest country in the Western European bus industry.

Why do LCVs dominate the Western European truck market?+

The truck market in Western Europe is dominated by LCVs as they are cost-effective and more fuel-efficient compared to heavy-duty variants.

Why is the demand for transit variants the highest in the Western European bus industry?+

Most end users in the truck market of Western Europe prefer the conventional propulsion.