The global cryogenic pump market accounted for a revenue of $1,407.6 million in 2021, which is expected to reach $1,860.1 million by 2030, advancing at a CAGR of 3.1% during 2021–2030. A major driver for the market is the rising deployment of these pumps in the electronics, metallurgy, and chemicals industries. Besides this, the increase in investment across the power generation sector coupled with the inclination toward electricity production from natural gas and renewable resources to cut carbon footprint is driving the market growth. 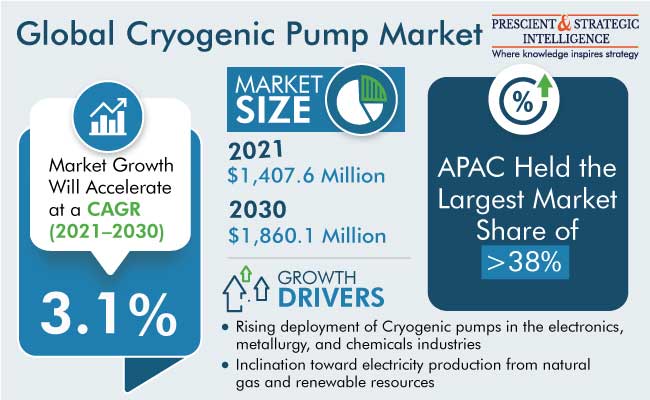 Dynamic Pumps Are Widely Used in the Market

Dynamic pumps held a larger cryogenic pump market revenue share, of around 79.4%, in 2021, owing to their superior properties, low maintenance cost, longer life, and high efficiency. Furthermore, the surge in demand for these pumps from the healthcare, energy and power, and shipbuilding industries would support the growth of the market.
The pump is also used for cryogenic cylinder filling, as well as for medical bottle filling with gaseous products. During the COVID-19 pandemic, these pumps witnessed an increase in sales, as there was a high demand for medical oxygen in several countries, globally. Moreover, these pumps are also used in several industrial applications like LNG and CO2 filling.

Nitrogen Category To Witness the Fastest Growth in the Market

The nitrogen category is projected to witness the fastest growth, advancing at a CAGR of around 3%, during the forecast period. This will mainly be because of the predominant use of nitrogen gas during plant maintenance, and shutdown and start-up preparations of petrochemical and refineries companies. Thus, the rising use of nitrogen gas in several industries, such as oil & gas, metallurgy, and healthcare, is intensifying the adoption of cryogenic pumps for trapping the gas and its vapor from the surface. 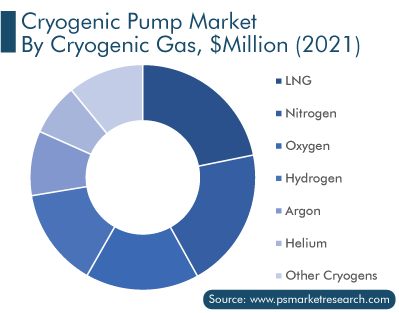 The oil & gas industry is the largest end user of cryogenic pumps in the market. This is ascribed to the rising production of natural gas due to its increasing demand from the petrochemical, special chemical, refining, and fertilizer industries. For instance, in February 2021, Qatar Petroleum signed a contract agreement of $30 billion for the first phase of its North Field LNG project development, aiming to lift the country’s LNG output by around 40% by 2026.

Whereas, the healthcare industry is projected to record the highest CAGR in the market. This can be primarily attributed to the surging vaccine development coupled with increasing investments by public and private organizations in this sector. In healthcare facilities, cryogenic gases are highly used for the preservation of body fluids like blood, plasma, and cells. Moreover, the manufacturing of various pharmaceutical gels, ointments, capsules, and tablets is mainly assisted by these pumps, due to their several properties like corrosion-resistant, and their ability to operate even in high-temperature conditions. Thus, these factors boost the cryogenic pump market size in this category. 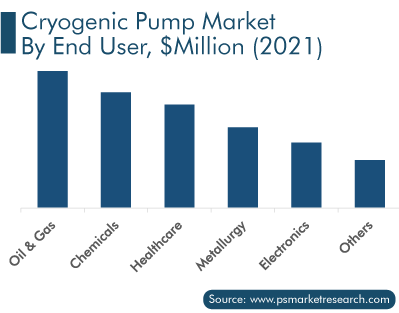 Increasing Demand from Chemicals and Petrochemicals Sector Driving the Market

The cryogenic pumps are also used significantly in the chemicals and petrochemicals sector for several applications, such as coal gasification, oxidation process, cool reactors, sulfur recovery, and regenerative catalysis. This is due to the rising need for various petrochemicals and chemicals across the world. For instance, the production capacity of petrochemicals is expected to increase from 2,214.9 million tons per annum (mtpa) in 2020 to 3,103.6 mtpa by 2030. This leads to high investments and improvement in the infrastructure of this sector, which, in turn, drives the demand for cryogenics pumps.

APAC accounted for the largest market revenue, of $538.2 million, in 2021, and it is also projected to lead the industry in the coming years. This is primarily due to the rapid urbanization; the development in sectors like metallurgy and energy & power in China, India, and Japan; and the rise in the need for energy across all countries of the region. Furthermore, in India, the government is planning to ensure a 24*7 electricity supply. To achieve this target, the country has to develop its electricity generation systems. Thus, the government is emphasizing natural gas-fired power plants, which, in turn, the demand for cryogenic pumps is expected to increase in the coming years.

Moreover, Europe is the second-largest market for cryogenic pumps, globally. This is because Europe has been aiming to make the region coal-free, which is creating a great scope for new gas-fired power plants. This leads to the increased need for cryogenic pumps in the region. For instance, in the U.K., electricity generation from coal is declined significantly. In 2012, coal was reported for 40% of the U.K. power generation, dropping drastically to 1.8% in 2020, and by 2024, the country will no longer use coal to generate electricity.

Key players have been actively engaged in recent market developments, such as client wins and facility expansions, in order to strengthen their product portfolios and achieve a larger market share. For instance:

In January 2022, Cyostar announced that it received an order of 15 NeoVP vertical pumps to be installed in an air separation unit in China.

Based on Cryogenic Gas

Frequently Asked Questions About This Report
What was the size of the cryogenic pump market in 2021?+

What will be the growth rate of the cryogenic pump market during the forecast period?+

Which is the largest end user of cryogenic pumps in the market?+

The oil & gas industry is the largest end user of cryogenic pumps in the market.

What are the major drivers for the cryogenic pump market?+

The major drivers of the cryogenic pump market include the rising demand for industrial gases from the oil & gas and chemicals and petrochemicals industries, and the increasing power generation from natural gas.