The global construction adhesives market size stood at $9,101.5 million in 2021, which is expected to reach $14,541.9 million by 2030, at a CAGR of 5.3% during 2021–2030. This is ascribed to the growing construction industry, and increasing demand for low-VOC adhesives, such as pressure-sensitive adhesives and water-based adhesives. 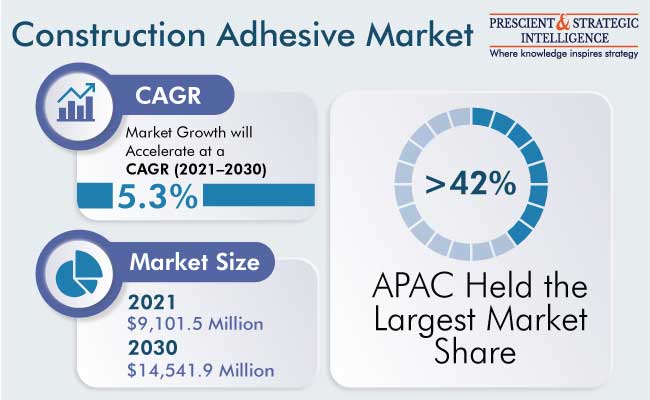 The acrylic category generated around $3,862.3 million revenue in 2021, and this number will grow at a CAGR of 5.7% during 2021–2030. This will be on account of the rapid growth of the construction industry in the APAC and MEA regions. Acrylic adhesives are preferred in the construction sector on account of their strong bonding with substrates, high impact strength, and excellent water resistance.

Polyurethane adhesives are expected to witness the second-highest CAGR in the market during the forecast period. This will be because they can bind to almost all types of substrates, such as plastic, wood, glass, and concrete. The category has shown steady growth of around 4.5% in the historical period, which declined by 6.1% during the pandemic due to the halt in construction projects.

With the implementation of infrastructure development programs all over the world, the product is expected to offer lucrative opportunities in the forecast period. For instance, in July 2021, Bostik SA announced the implementation of its program to bolster its polyurethane adhesives, with a focus on bonding and sealing applications in the construction industry. The company is developing its new range of polyurethane products based on low-isocyanate as well as solvent-free formulations. 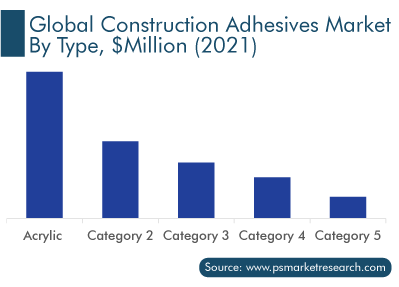 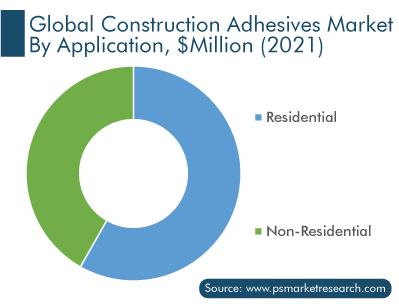 Water-based adhesives are expected to witness the fastest growth in the market during the forecast period, at a CAGR of 5.7%. This is on account of the high moisture resistance offered by water-based adhesives in comparison to those based on other technologies. In addition, they have a low VOC content, are environment-friendly, and offer excellent heat resistance.

Solvent-based construction adhesives are expected to witness the second-fastest growth, at a 5.4% CAGR, in the forecast period, owing to their long-lasting adhesion and high bond strength. Additionally, they aid in the prevention of corrosion on metals and offer high gap filling properties, which remove the unevenness between two surfaces. Therefore, the increase in the number of infrastructure projects in the APAC region is driving the demand for solvent-based construction adhesives.

The APAC construction adhesives market generated around 45% of the revenue in 2021. This is mainly attributed to the increasing disposable income, expanding construction activity, and strong economic growth. In addition, the snowballing government spending on infrastructure and rising demand for low-VOC adhesives drive the market growth. For instance, China is set to invest around $13 trillion in the building sector by the end of 2030.

North America is expected to witness the second-highest CAGR, of around 5.1%, during the forecast period. This is due to the surge in the use of these adhesives for roofing waterproofing, insulation, and cladding applications and the availability of technically advanced adhesives in the region. In addition, the rising use of adhesives that provide weather protection to buildings and prevent cracks on highways and airport runways drives the market growth in the region.

The implementation of stringent regulations by government bodies to limit the VOC content in adhesives is further fueling the market growth. For instance, in 2020, China implemented new VOC standards for companies manufacturing adhesives, coatings, cleaning products, and inks. Similarly, the U.S. Green Building Council outlines the limits for the VOC content in sealants and adhesives.

However, the growing infrastructure investment all over the world is the primary factor driving the market growth. For instance, in February 2022, the Indian government allocated around INR 48,000 crore under the PM Housing Scheme for the construction of 8 million houses by the end of 2023. Similarly, in October 2020, the U.K. government announced a package of around GBP 4 billion for the construction of 40 hospitals in England by 2030.

The majority of the builders are adopting oriented strand boards (OSBs) over plywood for floors and walls in sustainable projects. OSBs have a lower price and do not require mechanical bolts or cement, as they can be simply fixed through wax and polyurethane adhesives. In comparison to plywood for a typical 2,400-square-foot house, OSB usage lowers the construction cost by around $700.

In recent years, players in the market have been involved in product launches and geographical expansions to attain a significant position. For instance,

The research offers the market size of the global construction adhesives market for the period 2017–2030.

Frequently Asked Questions About This Report
What is the construction adhesives market growth forecast?+

What will be the value of the construction adhesives industry during the forecast period?+

What are the major factors driving the growth of the construction adhesives market?+

The key drivers for the market for construction adhesives are the burgeoning infrastructure spending and rising demand for sustainable and low-VOC adhesives.

What is the biggest construction adhesives industry opportunity?+

What is the most-significant region in the construction adhesives market?+

APAC and North America are the most-significant markets for construction adhesives.