The demand for biological drugs is growing with the increasing global prevalence of chronic diseases, such as cancer, diabetes, and cardiovascular diseases. In this regard, the growing geriatric population and prevalence of associated health issues and the booming demand for advanced biologic drugs are expected to create a healthy growth environment for the industry players.

Furthermore, the increasing number of clinical trials and high investments by companies in R&D activities on novel biologics and biosimilars are expected to boost the industry growth during the forecast period. The rising count of bio-based pharmaceutical product registrations for clinical testing and approvals, especially those created using new manufacturing technologies and platforms, is further expected to fuel the market growth. 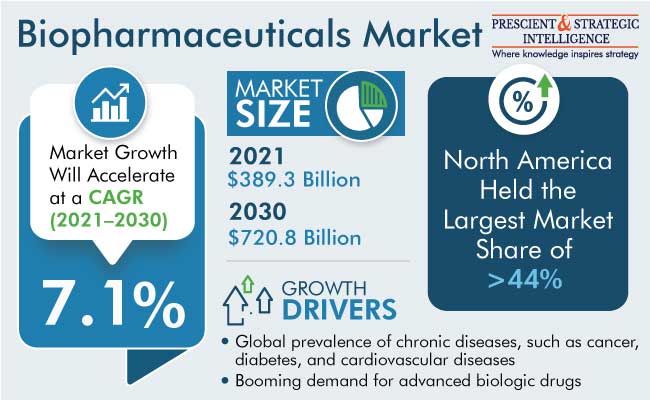 Innovations are being brought about in cancer treatment and gene therapies, which are expected to unlock a massive potential for regenerative medicine. However, there are technological and operational challenges, mainly a lack of the capabilities to consistently produce biomolecules at an industrial scale.

The pandemic had a significant positive impact on the market, as many biotech companies were engaged in developing drugs and vaccines for COVID-19 treatment. Although, many countries were in lockdowns, which led to the suspension of trade with other countries and, in turn, a slight decline in industrial production around the world.

But, the International Federation of Pharmaceutical Manufacturers and Associations supported and continued conducting clinical research studies and trials, to ensure that despite the disruption in operational activities, biotherapeutic medicines and vaccines were supplied consistently.

As per a study, biopharma medicines have achieved widespread acceptance, ascribed to the Europe-wide average price reductions from nearly 8% for anti-TNF biosimilar products to 33–34% for erythropoietin and G-CSF biosimilars compared to before biosimilars for these drugs were introduced. Moreover, the efficacy and safety of bio-based drugs have led to their rapid adoption by people.

For 17 years till 2017, biopharma products observed more-accelerated and higher-priority approvals in the area of cancer therapeutics than others. As per a study, about 12 out of the 46 chemical entities in approved 2017 and 23 out of 55 chemical entities authorized for marketing in 2018 were anti-neoplastic agents. Thus, with the increasing number of approvals for bio-pharmaceutical products for malignancy therapeutics, the oncology category is expected to experience a tremendous growth rate during the forecast period.

Furthermore, various companies and institutes are focusing on R&D related to biological pharmaceuticals. The number of New Drug Applications (NDAs)/Biologic License Applications (BLAs) registered per year has increased significantly. In 2021, more than 60 agents were approved, compared to about 50 in 2019.

With the rising prevalence of infectious diseases, neurological disorders, and cancer, biopharmaceuticals are becoming increasingly important. Additionally, they are used for the treatment of neurodegenerative disorders, many of which require bio-medicines to be administered directly into the brain, which is not possible with traditional synthetic agents. Moreover, the technological advancements in bio-based drugs have helped increase the chances of survival for cancer patients, cure hepatitis, aid in the recovery of patients with arthritis, and transform treatment options for many other diseases.

In 2021, North America was dominant, with a global revenue share of 44%, owing to the high R&D investments, growing adoption of technologically advanced solutions, presence of global players, and their efforts to come up with newer patents. The U.S. holds the major share in this region, which is followed by Europe and Asia-Pacific.

With the evolution of biotechnology and conventional pharma sciences, the awareness regarding the best treatments with lower side-effects has also increased. The U.S. leads the global biopharmaceutical R&D list with more than 150,000 studies conducted since 2008, because of the prominence and size of its pharmaceutical sector. Within the country, California accounts for the most studies, in part, because of its robust tech industry and desire for innovation.

Moreover, the U.S. biopharmaceuticals industry has produced more than half the world’s new molecules over the last decade, because of the well-supported intellectual property framework, investments, and government initiatives.

Thus, biopharmaceuticals market sales have shown an incredible growth over the past several years in the U.S. The country has been recognized as the innovation capital of the world for life sciences, and its government had put in capital investments since the early stages of pharmaceutical companies. Moreover, it is the biggest investor in healthcare due to its sizable population, established network of researchers, and expansive healthcare industry.

With regard to medical costs, the U.S. has a free-pricing marketing system. The U.S. prices of biologics are comparatively higher than in other countries, which allows biopharma firms to put in the high R&D funds on these drugs. 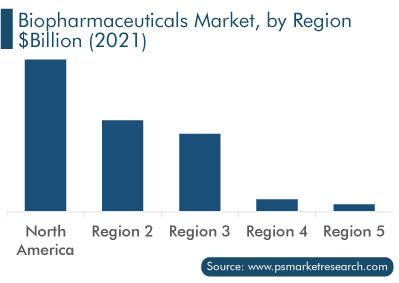 In 2021, monoclonal antibodies’ share was the largest, at 36%, and this category will show a CAGR, of around 7.2%, over the forecast period.

mAbs are the most-important class of biologics, which account for more than 20% of all the therapeutic candidates authorized by the Food and Drug Administration. Among the approved biologics in 2021, more than 15 were mAbs.

Several mAbs have been approved for anti-cancer, anti-inflammatory, and other therapeutic applications. Specifically, due to their extensively use in cancer treatment, they are becoming prevalent in developed countries, such as the U.S. and the U.K. In the same way, the demand for anti-inflammatory mAbs is growing at a good pace. These agents are either used for monotherapy or in combination with conventional therapies.

Moreover, pharma R&D investments are increasing due to the growing demand for prevention, treatment, and complete curative options for various diseases. Many pharmaceutical companies are focusing on developing more-effective products to treat life-threatening diseases and allow patients to live healthier lives with reduced disabilities. The increasing healthcare investments around the world are essentially propelling the increase in R&D activities, which is fueling the count of bio-based pharma products available around the world.

Moreover, cytokines and interferons (IFNs) have opened a new era of biologic therapies for neoplastic disorders, infectious diseases, and multiple sclerosis. Instead of directly acting on molecular and cellular targets, such as neoplastic cell receptors, or inhibiting occult cell growth or function, these agents mediate their biologic effects indirectly, through several immunological and other cells, or accessory proteins.

Cytokines have drawn immense interest from the pharmaceutical industry over the last two decades. Great effort has been devoted to finding ways to reproduce their effects or block their activity, in the quest to create novel drugs for cancer, infectious diseases, and inflammatory and autoimmune disorders. 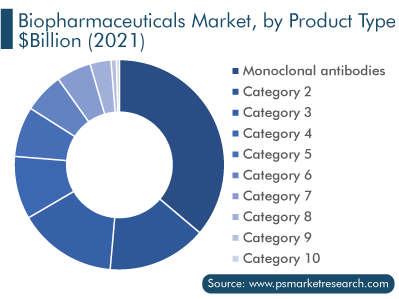 Key Players in Biopharmaceutical Market Are:

Frequently Asked Questions About This Report
What is the 2021 size of the biopharmaceuticals market?+

Which is the most-popular product type in the biopharmaceuticals industry?+

mAbs dominate the product type segment of the biopharmaceuticals industry.

Which is the leading application in the biopharmaceuticals market?+

Oncology is the largest application in the market for biopharmaceuticals.

What are the opportunities for biopharmaceuticals industry players?+

Cytokines and interferons offer opportunities in the biopharmaceuticals industry.

Which region holds the largest share in the biopharmaceuticals market?+

North America holds the largest share in the market for biopharmaceuticals.