The global gene therapy market size stood at USD 7,420 million in 2022, and it is expected to touch USD 29,440 million by 2030, advancing at a CAGR of 18.80% between 2022 and 2030. This growth is primarily attributed to the increasing R&D investment and rising approvals of gene therapy products.

The market is also driven by various factors such as the increasing prevalence of chronic diseases, such as cancer, rare disease genetic disorders, and others globally; rising government support, increasing legal acceptance of gene therapy for cancer treatment, and surging prevalence of cancer disease. Furthermore, the mushrooming healthcare expenditure, presence of better healthcare infrastructure, and availability of reimbursement policies are expected to create several opportunities for the industry players operating in the market throughout the projection period.

Moreover, the rapid technological advances in cellular and molecular biology in genomics research are significantly contributing to the gene therapy sector growth in recent years. Furthermore, academics, researchers, and in-house researchers from major market players with considerable funding have all played important roles in the market growth during the forecast period. 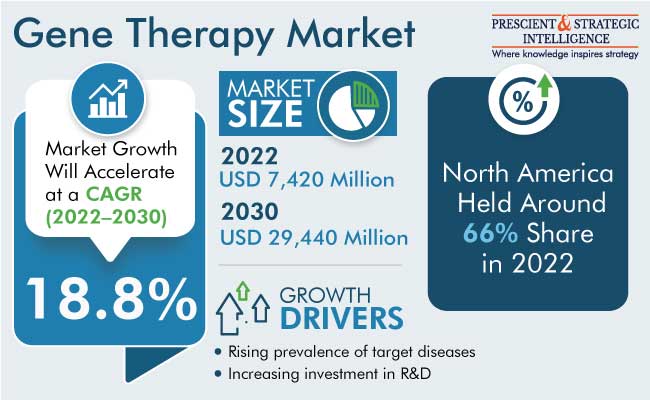 The in-vivo category accounted for the largest revenue share in the market. This is because this method eliminates the requirement for removing the cells from the patient’s body, manipulating them outside the body, and then returning them to their original place. Moreover, in vivo gene therapy is useful to modify the genetic repertoire of target cells for therapeutic goals. With in-vivo gene therapy, new genetic material is created in a lab and inserted into your cells directly. A vector usually carries the new genetic material into the body through an injection in the blood, or directly to the target organ.

Usage of Viruses as Vector in Gene Therapy To Grow Fastest

The viral category is predicted to witness the fastest growth in the market over the next few years. This is because viral vectors are exhibiting high levels of genomic expression and incorporation in clinical trials. Moreover, viral vectors are more efficient than non-viral variants and widely being adopted all over the world. The popularity of viral vectors essentially stems from the fact that they can deliver genetic material to cells effectively. Due to their incredible capacity to transport several copies of therapeutic genes to host cells, viral vectors are the most often used agents in gene therapy, which is expected to fuel the market growth in coming years.

Gene Therapies Are Mostly Used for Cancer Treatment and Research

The oncology category generated the highest revenue in the market in 2022 due to the high prevalence of cancer. For instance, as per the WHO report, it is predicting that more than 9 million people die from cancer each year. Moreover, given that gene therapy is very selective in destroying tumor cells, over 60% of the clinical studies that are now being conducted in the field are for the treatment of cancer.

Moreover, several gene therapy techniques have been applied to the treatment of cancer, such as oncolytic virotherapy, immune modulation based on gene therapy, anti-angiogenic gene therapy, treatment of gene defects, tumor invasion pathways, RNAi strategies, and genetic manipulation of apoptotic and antisense. Furthermore, lung, brain, pancreatic, liver, prostate, colorectal, bladder, ovarian, and renal cancer are among the cancer types that have been treated by gene therapy.

In China, the sale of two cancer gene therapy medications has now been authorized. Additionally, using gene therapy to activate the host's immune system is gaining a lot of attention. This study aims to highlight some important clinical trial results and to identify the most prominent viral and non-viral vectors and approaches used in cancer gene therapy.

Pharma and Biotech Companies Are Largest Users of Gene Therapies

Pharmaceutical and biotechnology companies held the largest revenue share in the market in 2022. This is due to the existence of multiple industry participants who contracted out the vector production process to broaden the use of gene therapy and enable it to treat many more ailments than it now is. Furthermore, key companies are exploring a range of market entry strategies, including the growth of biopharmaceutical facilities, partnerships with other significant companies, and partnerships with contract manufacturing organizations. 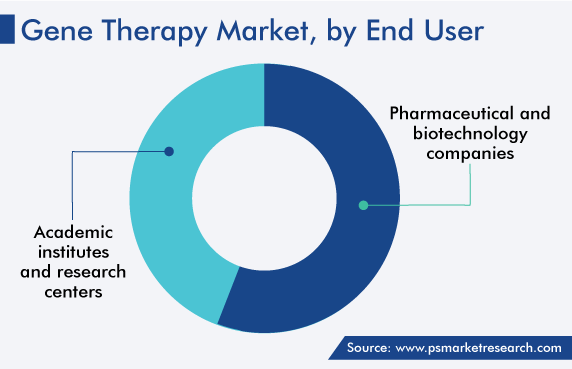 The growing prevalence of chronic diseases, such as cancer and various rare diseases, is one of the major factors driving the progress of the market. This is because currently available gene therapies can treat various rare diseases, especially those that are caused due to genetic problems, to some extent. For instance, according to the American Cancer Society's 'Cancer Facts & Figures 2022', around 1,918,030 new cancer cases and 609,360 deaths due to cancers are reported in the U.S. in the year 2022.

The growth of the gene therapy industry is being slightly hampered by the low production volume, high production costs, high capital requirements, and long lead times. To overcome these issues, the automation of the production process is becoming necessary, as this will drastically reduce the requirement for manual labor, variability in production, and the cost of the products. Additionally, the manufacturing and throughput efficiency can be augmented without affecting the purity of the active particles by enhancing the vector and cell technologies.

Moreover, the optimization of therapy delivery systems would reduce the need for invasive intrathecal and intracellular injections and improve the management of blood, liver, immune system, eye, and spine diseases. Therefore, as novel gene therapies receive the approval of regulatory agencies, many more diseases might become curable in the future.

North America held the largest share, of around 66%, in the market in 2022, and it is expected to sustain its dominance over the next few years. This is ascribed to the increasing prevalence of cancer and the presence of several leading industry players in the region. In addition, regulatory authorities are rapidly approving gene therapy products, thereby fueling the expansion of the market. Within the region, the U.S. is the larger user of gene therapy because of its advanced healthcare sector and most of the market players have offices and laboratories here.

The Asia-Pacific gene therapy market is predicted to advance at the fastest rate throughout the projection period due to the low labor costs and the emergence of group investors. In addition, regional nations are putting rules into effect to control the procedures for developing and approving gene therapy items. The Asia Pacific region is expected to have significant growth in the commercial usage of genetic therapies throughout the projection period because of the easy access to resources, presence of large firms locally, and increase in government financing across the region.

On the other hand, Europe is expected to hold significant growth in the coming years. The presence of contemporary healthcare infrastructure, reimbursement availability, and the presence of important industry players are all essential factors driving the growth of the European region. 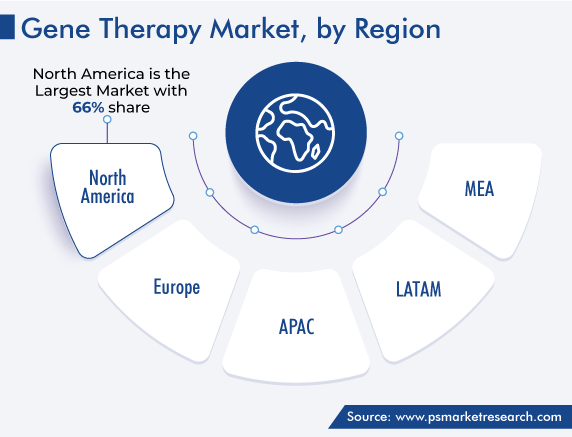 Top Players in Gene Therapy Are:

The report analyzes the impact of the major drivers and restraints on the gene therapy market, to offer accurate market estimations for 2017–2030.

Based on Vector Type

Frequently Asked Questions About This Report
How big was the gene therapy market in 2022?+

What is the predicted size of the gene therapy market?+

Which region will register the fastest growth in the market for gene therapy in the future?+

The Asia-Pacific gene therapy market is predicted to advance at the fastest rate throughout the projection period.

Which vector type will grow fastest in the market for gene therapy?+

Based on vector type, the viral category is predicted to witness the fastest growth in the gene therapy industry.