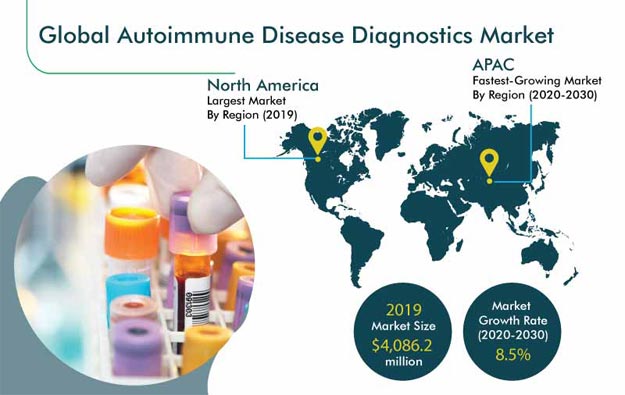 Routine Laboratory Category Is Expected to Be Largest and Fastest-Growing

The autoimmune disease diagnostics market based on test type is classified into routine laboratory, inflammatory marker, autoantibodies and immunology, human leukocyte antigen (HLA), cytokine, flow cytometry, and others. Of these, the routine laboratory test category generated the largest revenue in 2019. It is also expected to remain largest and grow fastest in the forecast period. This can be ascribed to the fact the blood tests and serum tests are the initial procedures and require repeated diagnosis to check the abnormality in the bloodstream.

The RA category is projected to grow at the highest rate in the autoimmune disease diagnostics market, owing to the high prevalence of RA across the globe. The global prevalence and incidence of RA was also studied in the Global Burden of Diseases (GBD) 2017 report. Based on the statistical data, a total of 10,226,042 prevalent cases of RA were reported in 1990, which increased to 19,965,115 in 2017.

Hospitals were the largest end users of autoimmune disease diagnostics and related products in 2019. The category is further expected to remain largest in the autoimmune disease diagnostics market during the forecast years. The increasing adoption of technologically advanced products, surging prevalence of chronic autoimmune diseases, rising number of awareness campaigns and conferences conducted by a number of public and private organizations, and improving healthcare infrastructure are some of the major factors contributing to the market growth.

During the historical period (2014–2019), North America accounted for the largest share in the autoimmune disease diagnostics market, due to the rising healthcare spending, increasing prevalence of autoimmune diseases, surging geriatric population, and presence of big market players.

Fastest Growth to Be Witnessed by the APAC Region

One of the major factors responsible for driving the market growth in the Asia-Pacific (APAC) region is the presence of key players. Other major factors include cost-effective diagnostic tests, cheap labor, increasing geriatric population, and rise in initiatives by public and private organizations to raise awareness about autoimmune diseases. According to the World Bank data, the proportion of people aged 65 years and above in 2010 in Japan was 22.5%, which increased to 27.6% in 2018. Also, the number is projected to increase up to 60.0% by 2030. Furthermore, somehow similar scenario is observed for other APAC countries. 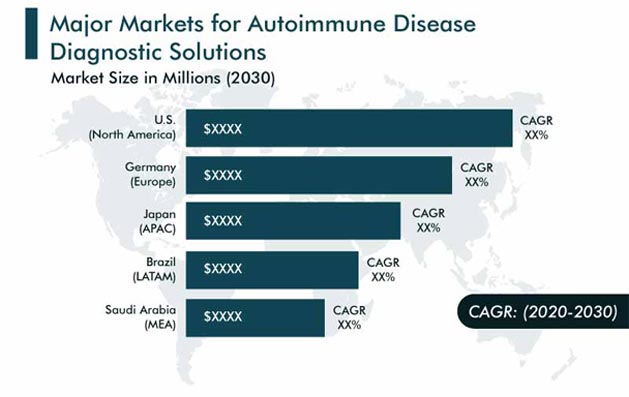 COVID-19 is having a positive impact on the global autoimmune disease diagnostics market. Due to this pandemic, the outlook for the industry has changed significantly, with predicted increase in the demand for diagnostic products in the short run, across the globe. Further, significant growth is likely to be witnessed with the proper lifting of lockdowns in several cities and resumption of import and export activities worldwide.

Increasing awareness about autoimmune diseases is a major driver for the growth of the autoimmune disease diagnostics market. A number of conferences are expected to be held in later half of 2020 and throughout 2021 to raise awareness and serve as a platform to share knowledge about advancements in the field of autoimmune diseases. For instance, the 12th International Congress on Autoimmunity is to be held from November 28, 2020, to December 1, 2020, in Athens, Greece. Similarly, the International Conference on Autoimmune Diseases and Dermatology will be held on January 18–19, 2021, in Rome, Italy. The purpose of these conferences is to bring together academic scientists, researchers, and research scholars to exchange thoughts and share their experience and research results on all aspects of autoimmune diseases and dermatology. All these factors propel the growth of the market.

Widespread Burden of Autoimmune Diseases Has High Impact on the Market

Market Players Focusing on Product Approvals to Expand Consumer Base

In recent years, the players in the industry have engaged in strategic developments, such as product launches, in order to stay ahead of their competitors. For instance:

Some of the Key Market Players in the Autoimmune Disease Diagnostics Market include:

Based on Test Type