The Australian micromobility market generated $16.9 million revenue in 2020, and it is projected to show a substantial growth rate during the forecast period (2021–2030). The key factors for the growth of the market are the low price and convenience of these solutions, rising demand for first- and last-mile connectivity, and escalating need for reducing traffic congestion in urban areas.

Micromobility in the country had enticed a lot of entrepreneurial and user interest till 2019. However, the preventive measures taken by the government, such as complete lockdowns and even curfews in hotspot areas, halted the healthy demand trend for micromobility services from March 2020 to June 2020. But, the COVID-19 pandemic created opportunities for the micromobility market in Australia as well, as fewer people are choosing the crowded public transit presently, which is why the demand for alternate means of transportation is growing. Micromobility has emerged as one of the most-effective forms of transportation, with a growing number of people in the country using it. The notion is being supported by the government laws and structures that have created dedicated paths and road lanes and allocated parking places for these vehicles even in congested locations. 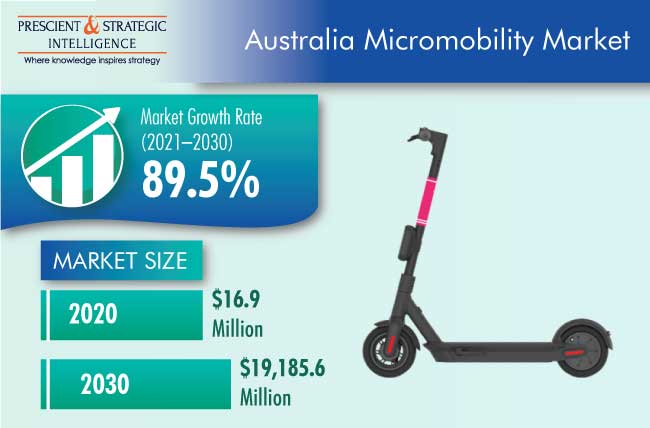 The largest share in the Australian micromobility market was held by e-scooters in 2020, on the basis of vehicle type. The popularity of e-scooters for short distances and recreational purposes has boosted the revenue in this category dramatically. Furthermore, e-scooters are economical and accessible, as well as environment-friendly because they do not require gasoline or other petroleum-based fuels. These automobiles are designed to fit in a small space and snake through dense traffic easily. During the forecast period, the increasing number of trips per vehicle and supportive regulations are expected to help the category's growth.

The dockless bifurcation dominated the Australian micromobility market in 2020, and it will further grow significantly in the forecast period, based on sharing system. It will majorly be due to a rise in the number of businesses choosing the dockless bike sharing concept over the station-based (docked) system because the former requires less capital and has lower operating costs. Consumers also prefer dockless sharing to docked sharing because of its cost-effectiveness and convenient features, such as parking flexibility. Furthermore, in the coming years, the growing demand for e-scooter sharing services will encourage the deployment of more dockless systems in the country.

The introduction of swappable batteries has increased the fleet uptime significantly, while also curtailing the operational costs, which has ultimately taken the micromobility industry toward profitability. Moreover, with swappable batteries, scooter unit economies can be ameliorated, as they not only reduce a substantial part of the charging costs but also improve the vehicle availability. Battery swapping can be accomplished in two ways: a) the rider replaces the discharged battery with a charged one at a dedicated swapping center and b) a micromobility company employee or freelancer goes around the city and swaps discharged batteries with charged ones. Thus, advent of battery swapping technology is a key trend witnessed in the micromobility market. 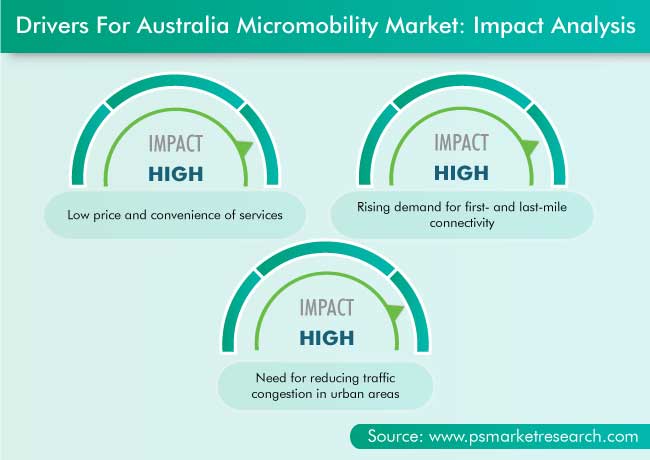 The growing population has led to an increasing number of daily commuters, thus creating significant road congestion, especially in the peak hours. According to the World Bank, the urban population of the country increased from 20.4 million in 2015 to 22.1 million in 2020. The rising number of commuters is putting extra burden on the existing transportation systems. In the absence of an efficient means of public transportation, people tend to choose personal vehicles, thus further worsening the situation and leading to more traffic congestion.

Micromobility provides better connectivity to public transit hubs, reduces the reliance of people on their personal vehicles, and helps in shrinking the carbon footprint. Moreover, these vehicles are compact and require less space on the roads and at parking stations. Therefore, with the rising population in urban areas, the usage of more-efficient means of transportation, such as micromobility, is rising, especially for short distances.

Owing to the increasing demand for micromobility, market players are raising investment and funding.

Frequently Asked Questions About This Report
Where will the Australian micromobility market be in 2030?+

Which category dominates the vehicle type segment of the Australian micromobility industry?+

Based on vehicle type, the Australian micromobility industry is dominated by e-scooters.

What is the biggest trend in the Australian micromobility market?+

Swappable batteries are the biggest trend in the micromobility market of Australia.

Why are dockless systems more popular in the Australian micromobility industry?+

The preference for dockless systems in the Australian micromobility industry is owed to their cost-effectiveness for service providers and convenience for commuters.

What are Australian micromobility market players doing for business growth?+

Players in the micromobility market of Australia are expanding their fleets and operational areas.