The augmented reality (AR) and virtual reality (VR) market size was $37.0 billion in 2019, and it is expected to reach $1,274.4 billion in 2030, while progressing at a CAGR of 42.9% during 2020–2030. This can be owed to the increasing adoption of the AR and VR technologies in the gaming, entertainment, education, tourism, and healthcare sectors.

Like most industries, the AR and VR industry suffered a setback due to the COVID-19 pandemic, owing to the temporary shutdown of manufacturing units. Several electronic component manufacturers have observed subdued growth due to the cancellation of orders, unavailability of raw materials, and shortage of inventories. Moreover, a substantial decline in the consumer spending on non-essential goods had a negative impact on the market. 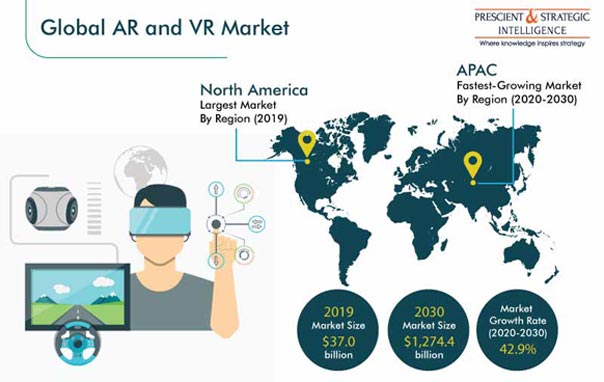 The AR category, within the type segment, is expected to observe the faster growth in the coming years owing to the endless possibilities and advantages offered by the AR technology. It provides a connected experience to users when combined with the constantly evolving wireless technology, which allows for the integration of AR with home appliances and mobile devices. Moreover, the ability of the AR technology to integrate digital information with the physical environment in real time will contribute to the growth of this category in the AR and VR market.

The hardware category of the offering segment held the larger market share in the past owing to a significant dip in the prices of AR and VR devices, the high popularity of AR and VR in the gaming industry, and easy availability of headsets. Additionally, this category will generate the higher revenue in the coming years as well. This will be due to the spurring demand for high-quality entertainment content and emphasis of companies on improving their display features and offering customized items to enterprises. For example, in April 2018, HTC Corporation introduced a new version of its Vive series, with a special focus on business applications.

HMDs recorded the highest sales during 2014–2019, based on device type, and they are expected to register notable growth in the future. This can be attributed to the mushrooming demand for lightweight displays and surging number of patented products. Moreover, the rapid advancements in technology are adding to the growth of this category. AR- and VR-based HMDs are being increasingly used in the tourism, gaming, education, military, and automotive sectors. Moreover, the rapid digitization, vast requirement for affordable HMDs, hefty investments in the AR and VR market, and tremendous scope of gaming applications will contribute to the sales of HMDs worldwide.

The consumer application category accounted for the major share in 2019, and it is expected to retain its dominance on the market for AR and VR solutions till 2030. This can be primarily attributed to the rising awareness on the AR and VR technologies and burgeoning demand for more-interactive and -immersive games. Additionally, the growing disposable income has amplified the sales of gaming systems, which, in turn, will boost the growth of this category in the foreseeable future.

The North American region generated the highest revenue for the market for AR and VR solutions during 2014–2019, and it will witness considerable growth during 2020–2030. Of the two North American countries, the U.S. has emerged as the global leader owing to the presence of numerous market players in the country. Besides, the rising application of the AR and VR technologies in the healthcare and e-commerce sectors will play a prominent role in driving the market growth in the region. For example, a U.S.-based medical imaging solution provider — AccuVein Inc. — offers the AR technology to assist nurses and doctors in locating veins in patients.

The APAC AR and VR market is expected to demonstrate the fastest growth during 2020–2030. Although the regional market is still in its nascent phase, the initial stages of technological revolution have created an extensive buzz here. This can be ascribed to the vast population, especially of the tech-savvy youth, and high popularity of AR- and VR-enabled gaming. Owing to these reasons, several leading players are launching AR and VR devices in the region.

For instance, it is being reported that Sony Corporation is involved in the development of a new PlayStation VR headset that will accompany its PS5 console. Moreover, in October 2019, LG Uplus Corporation, a South Korean 5G service provider, and eyecandylab Corporation, an AR start-up, introduced U+AR Shopping, an AR service for online shopping portals. 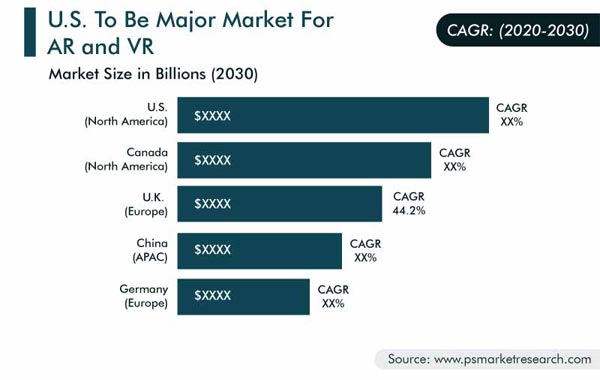 Major tech companies are focusing on acquiring and funding start-ups and introducing their own AR and VR devices. In 2018, more than $3.6 billion were invested in AR/VR start-ups. The aim behind these investments is to take the AR and VR market to new heights. For instance, in 2019, major EdTech (educational technology) companies in the U.S., namely Guild Education, BetterUp, and Coursera, received $157 million from General Catalyst, $103 million from Lightspeed Venture Partners, and $103 million from SEEK Group, respectively. 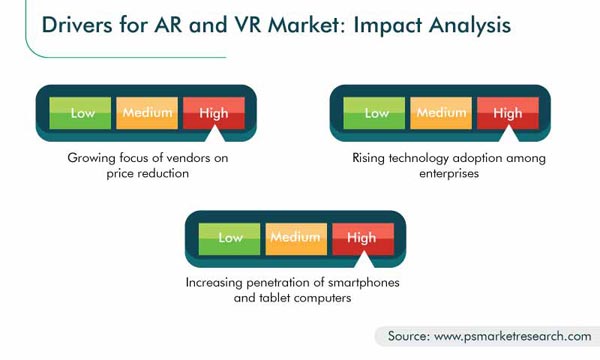 Technological innovations in the hardware and software will help in curtailing the prices of AR and VR solutions in the coming years. Advancements in the area of optics, including light-field technology, are expected to boost the development of compact, flexible, and affordable displays for headsets and smart glasses. Currently, market players are offering software development kits (SDKs) to application developers at affordable prices. Due to the increasing application base of such technologies, the cost of the products will reduce in the foreseeable future.

Enterprises across sectors are the prime consumer base for AR and VR technology providers. Major app developers, solution providers, and device manufacturers target business entities because of the wide application base offered by them. Most of the Fortune 500 companies have started experimenting with these technologies, and a few of them have already initiated their pilot projects. The increasing focus on and adoption of these technologies by enterprises will, therefore, accelerate the AR and VR market growth in the near future. For example, The Boeing Company reduced its wiring production time by 25% and curtailed the error rate by using smart glass displays.

The AR and VR technologies are rapidly reaching the masses through different platforms, including smartphones and tablet computers. With the high adoption of these consumer electronics, they have become a potential hardware interface for the associated applications. For example, the number of smartphone users in the world is set to reach nearly 3.5 billion by the end of this year, which will be an increment of around 9.3% from 2019. The key players are, therefore, focusing on tapping the resourcefulness of these media to introduce their products through several mobile application stores.

Partnerships and Agreements Are Important Strategic Developments in Market

Partnering with major companies operating in the AR and VR market can open new avenues for small and mid-level companies and simultaneously improve the product offerings of the established company. In order to expand their reach, in terms of product portfolio and geography, major players have opted for partnerships and other agreements with players having a similar product portfolio.

For instance, in June 2020, PTC Inc. announced its partnership with Rockwell Automation Inc. to offer customers the PTC Vuforia Chalk AR software free of charge, to help them meet the challenges of working remotely and drive productivity and efficiency in industrial settings. 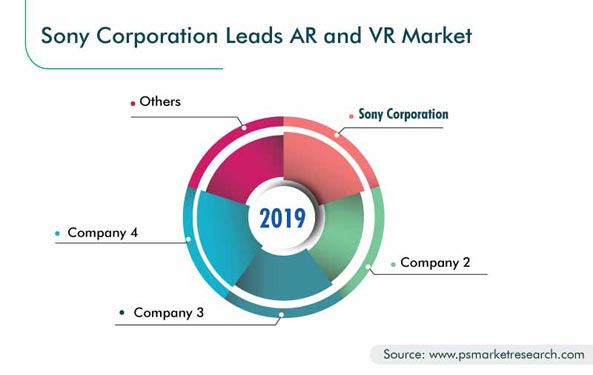 Key players in the AR and VR market report are:

The AR and VR market report offers comprehensive market segmentation analysis along with market estimation for the period 2014–2030.