The Vietnamese micromobility market was valued at $89.9 million in 2020, and it is expected to grow at a CAGR of 66.0% during the forecasted period of 2021–2030. The need for reducing the traffic congestion and parking issues and economical nature of this mobility option are the major factors driving the growth of the market.

The COVID-19 outbreak has caused companies in the Vietnamese transportation sector to face economic stress due to liquidity, labor, contract, and other issues and resulted in ceased payments to employees. The pandemic has greatly strained the supply chains and first- and last-mile connectivity. Although COVID-19 had a significant effect on the micromobility market in 2020, the market is expected to stabilize in the upcoming years. Moreover, with proper control measures pertaining to the monitoring of the COVID-19 impact, contingency planning, tightening of the financial steering, and diligent staff engagement and communication, along with consumer demand creation, the situation is projected to normalize soon. Therefore, as Vietnam gets back to normalcy, it is expected that COVID-19 will become a key catalyst for digital and other technological advancements in the industry. 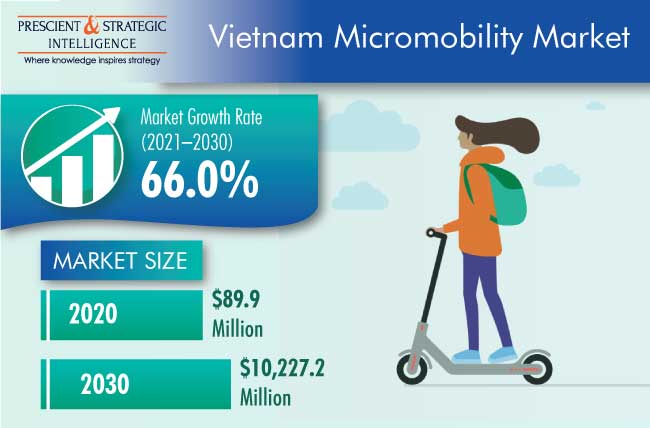 The e-moped category is projected to dominate the Vietnamese micromobility market during the forecast period, based on vehicle type. This can be mainly ascribed to the large population of young and tech-savvy consumers, coupled with the rising tourist inflow in the country. Vietnam has a vibrant motorcycle culture, and the expansion of micromobility services with improved electric two-wheelers are expected to have a positive influence on the market in the long run.

In Vietnamese micromobility market, the dockless category accounted for the larger share in 2020, which is expected to increase at the higher rate during the forecast period, on the basis of sharing system. This is attributed to the increasing focus of companies on dockless systems because of their lower investment requirements, as companies do not have to create parking stations for them. Further, users get convenience due to the elimination of parking problems.

The inclusion of e-bikes is one of the major strategic moves being opted for by many bike sharing service providers in Vietnamese micromobility market. Companies are witnessing a huge demand for e-bikes from users. The e-bike is a preferred mode of transport as it fulfills the requirement for a higher speed in short-distance commuting better when compared to a pedal bike. Although the cost of e-bike sharing services is a little higher than those offered on manually operated bicycles, features such as higher speed, more convenience, effortless driving, and variable motor power as per the road conditions make e-bikes preferred. Owing to these advantages, key players, in partnership with government authorities, have started launching e-bike sharing services.

Traffic jams are prominent in Vietnam and occur regularly. In some large cities, such as Hanoi and Ho Chi Minh City, traffic jams have always been an issue, as there are too many vehicles, especially motorcycles. Additionally, the use of cars adds up to other issues, including parking problems and excessive emissions. In the absence of an efficient means of public transportation, people tend to choose personal vehicles, thus further complicating the situation and leading to more traffic congestion. Micromobility offers better connectivity to public transit hubs, thus reducing the reliance of people on their personal vehicles for first- and last-mile travel. Thus, micromobility is emerging as a potential alternative for overcoming traffic congestion.

The low commuting cost attached with micromobility sharing services is one of the major drivers for the growth of the market. For instance, the typical revenue structure of an e-bike sharing service includes an initial fixed fee for unlocking the bike and $0.86 per hour of travel on an average, which is much lower than that for other public shared mobility options, such as taxi services, ridesharing services, and car rental services. Although e-bike sharing costs more than pedal bike sharing, shared e-bikes are economical than other means of shared transport, such as ridesharing and car rental. Hence, these economical offerings are expected to result in the exponential growth of the micromobility market in Vietnam during the forecast period.

In recent years, players in the market have been involved in operational expansions in order to attain a significant position. For instance:

Frequently Asked Questions About This Report
What is the Vietnamese micromobility market 2020 size?+

The 2020 size of the micromobility market of Vietnam was $89.9 million.

Which vehicle type is preferred in the Vietnamese micromobility industry?+

E-mopeds will be the preferred type of vehicle in the Vietnamese micromobility industry.

What is the key Vietnamese micromobility market trend?+

E-bikes are trending in the micromobility market of Vietnam.

How will the COVID-19 pandemic affect the Vietnamese micromobility industry in future?+

In the coming years, the fear of infection created by the pandemic will act as a boost for the Vietnamese micromobility industry.

What are Vietnamese micromobility market players doing for growth?+

Companies in the micromobility market of Vietnam are expanding their services.