The global video surveillance as a service market size in 2021 was $2,992.4 million, and it is expected to advance at a CAGR of 18.3% during the forecast period, to reach $13,584.3 million by 2030. A video surveillance system manages several video systems, to collect, manage, and present video in a clear and simple manner.

With the emergence of smart cameras and various accompanying sensors, there has been a shift toward greater in-band analytics. This combination of variables has paved the way for video surveillance to gain prominence as a service option. For example, commercial establishments use smart cameras, in-band analytics, and other methods to automate operations that need numerous personnel. 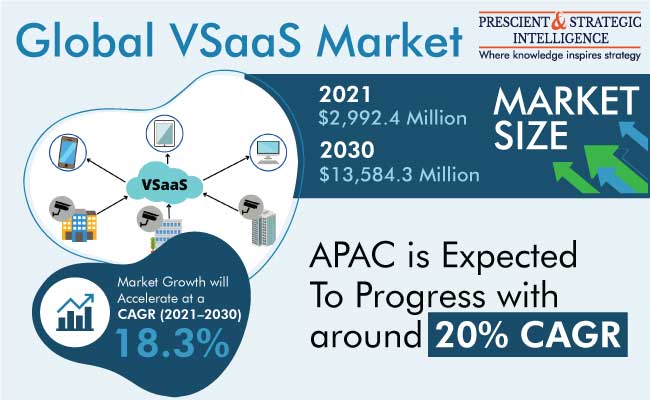 Video surveillance as a service is being popularly availed via cloud-based solutions. The advancements in cloud computing and increase in the bandwidths available make this kind of deployment more appealing to end users and lucrative for vendors.

Cloud-based services, in particular, are seeing a rapid increase in acceptance by users in the surveillance industry. When the details are examined, there are substantial advantages of transferring locally captured video data to the cloud. They include ease of granting access to security monitoring teams, who ensure better coverage, evidence tampering prevention, and faster response. Currently, advanced VSaaS solutions provide numerous functionalities, such as video data compression and the establishment of event-based rules, particularly to optimize the incoming video for varying connection speeds.

The largest market share, of more than 35%, held by the hosted VSaaS category in 2021 is attributed to the increasing usage of hosted VSaaS throughout the residential and retail sectors, as well as the rampant establishment of smart cities. Furthermore, the rising smartphone penetration, commercialization of 5G services, and availability of high-speed internet are all contributing to the growth of the hosted VSaaS industry. Moreover, the reducing cloud storage costs have resulted in lower subscription fees, thus leading to a rise in the count of customers preferring hosted video services across verticals.

Furthermore, managed VSaaS is gaining popularity in the video surveillance as a service market as it helps minimize security staffing costs, increase security incident response time, and reduce the risk of liabilities and spending on insurance.

Moreover, hybrid VSaaS demand is expected to grow at a CAGR of around 20% over the forecast period. This can be ascribed to the benefits the combination of managed video services and on-premises video recording hybrid VSaaS provides. In this model, the recorded data is stored at both the customer and service provider’s ends; the main reason for the popularity of this model is the concerns regarding the security of the data that is solely stored on the cloud.

VSaaS Was Widely Used in BFSI Industry in 2021

The BFSI sector has grown tremendously in recent years owing to people’s rising disposable income. The adoption of VSaaS in financial institutions to monitor customers and staff activities has been increasing over the last few years due to the advantages offered by VSaaS, such as lower initial investments, flexibility in adding devices, and remote access to surveillance data. Moreover, these services prevent kidnapping and robberies, help in detecting vandalism and fraud at cash points, and integrate security and safety concepts into banking processes. 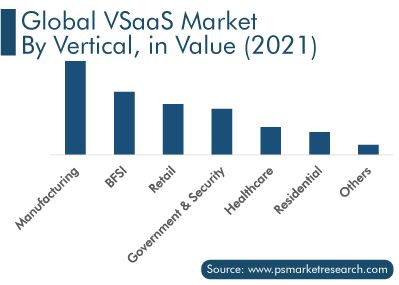 North America dominates the video surveillance as a service market, with a revenue share of around 40% in 2021, due to the rising crime rates, growing terrorism, and government measures to set up advanced monitoring systems in public areas and government buildings.

In the U.S., business establishments, such as hotels, restaurants, and office complexes, are the most-common users of video surveillance as a service. The government of the country has launched many programs to install advanced surveillance systems in public places and official buildings. It is also focused on increasing the penetration of these services throughout the defense and infrastructure industries. Moreover, the Canadian market is growing as the country is witnessing a high crime rate, which is forcing the government to invest in video surveillance as a service.

Furthermore, Europe is expected to grow at a steady pace in the industry due to the technological advancements in various sectors, initiatives by governments for improving security measures, and rising adoption of cloud-enabled video surveillance as a service.

Moreover, the growing popularity of the smart city concept will drive the APAC video surveillance as a service market growth. To boost security in the region, advanced video surveillance techniques are being integrated into city administration ecosystems. Moreover, many startups and big companies in the market are focusing on integrating emerging technologies, such as IoT, ML, and AI, in their video surveillance as a service solution, to cater to the smart city concept and stay afloat amidst the rapid digitalization across the region.

Further, LATAM is gradually transitioning to video surveillance as a service because of the region's high crime rate and growing tourism sector, which is why video monitoring systems are being rapidly installed. With the rise in the demand for video surveillance in various industries across the region, extensive collaboration is being witnessed among businesses and governments. For example, in April 2022, Brazil's Metrô Rio equipped its security agents with Motorola Solutions' VB400 body-worn cameras. The VB400 comes with a wide-angle lens, which captures high-quality video from the wearer's perspective; an intuitive recording function, and a 12-hour battery life, which allows it to last longer than the normal shift.

Similar growth prospects for VSaaS vendors are available in the MEA region. Several government initiatives, including the Dubai Smart City Initiative, the National Plan 2020, and Vision 2021, have contributed to this. As part of these endeavors, major infrastructure projects, such as the Dubai Metro and Abu Dhabi Metro, as well as the development of new retail malls and several residential projects, are in the works, indicating an increasing demand for these services in the MEA in the coming years. 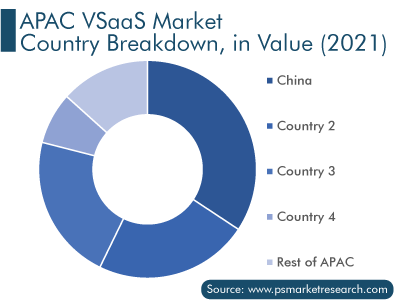 Stakeholders have been able to develop cutting-edge solutions owing to the rapid technological breakthroughs and the entrance of cloud computing and artificial intelligence into the market landscape. To obtain a competitive advantage, market participants are expected to propose more creative solutions in the near future.

Top Players in VSaaS Market Are:

Frequently Asked Questions About This Report
What will be the CAGR of the VSaaS market during 2021–2030?+

Does this report include the impact of COVID-19 on the VSaaS industry?+

Yes, the COVID-19 impact on the VSaaS industry is available as a separate chapter in the complete report.

Which are the significant countries in the VSaaS industry?+

The U.S., China, India, and Canada are among the most-lucrative countries in the VSaaS industry.

Which industries should VSaaS market players target for high revenue?+

Players in the market for VSaaS should look at customers in the BFSI, defense, and hospitality industries.