The global transplantation market size is expected to reach $30,117.5 million by 2030 from $13,605.9 million in 2021, advancing at a CAGR of 9.2% during 2021–2030. The major factor credited for the growth of the market is the increasing incidence of chronic diseases, such as kidney failure, myelodysplastic disorders, solid tumors, disorders of the immune system, and plasma cell disorders. Moreover, the rising awareness about donating organs, along with technological advancements, such as robot-assisted kidney transplants, and an overall improvement in organ transportation success rates are boosting the growth. 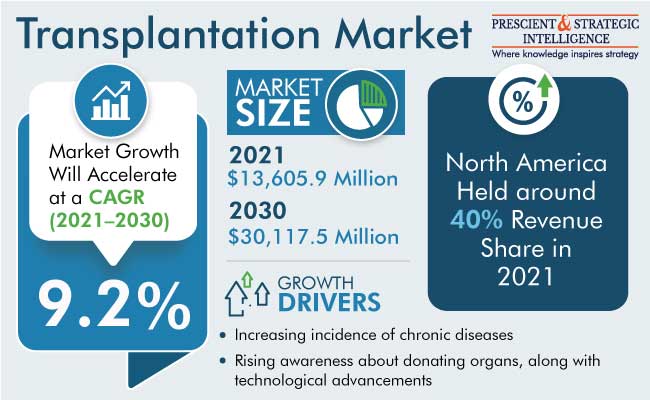 Tissue products for transplantation accounted for the largest share in 2021, and this category is expected to maintain its position in the near future because of the increasing use of orthobiologics in orthopedic procedures for tissue healing, normal functioning restoration, and pain minimization, along with the rising geriatric population across the globe. Moreover, startup companies in this field are receiving investments to expand their business. For instance, in 2021, Catalyst OrthoScience, a shoulder replacement manufacturer, raised $12.3 million in its Series D financing round and launched the Archer R1 Reverse Shoulder System and Archer 3D Targeting Imaging Software.

Immunosuppressive drugs are set to witness the fastest growth, at a CAGR of 9.6%, during the forecast period. The growth in this category is ascribed to the surge in the prevalence of autoimmune disorders, such as alopecia areata, multiple sclerosis, and arthritis, combined with the rising incidence of organ failures, especially the kidneys, lungs, liver, and heart. Moreover, the surge in the disposable income in developing countries will create profitable prospects in the coming years. 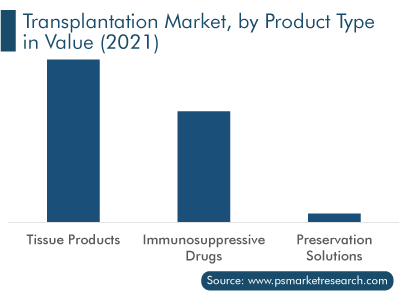 Tissue transplantation held the larger revenue share, of more than 60%, in 2021, and it is likely to undergo substantial growth, to maintain its dominant position, during the forecast period. The growth in tissue transplantation activities is majorly attributed to the increasing transplantation of the corneas, blood vessels, heart valves, skin, ligaments, tendons, and bones. Among these, skin grafting is the most-common tissue transplantation procedure, due to the surge in the number of burns, along with the rise in the prevalence of skin cancer and road accidents.

Hospitals Are Largest End Users, while Transplant Centers Are Fastest-Growing

Hospitals generated around 50% of the revenue in 2021, as they are the primary centers for organ and tissue transplants. Moreover, the improving healthcare infrastructure, along with the existence of a well-defined database of donors and patients needing transplants, is fueling the revenue generation from hospitals.

Transplantation centers also generate significant revenue, which is projected to increase rapidly during the forecast period. This growth is ascribed to the rising awareness among patients and donors about these centers, as they have specialty surgeons and other staff members to perform the procedures, along with a strong organ and tissue procurement and transplantation network. Additionally, these centers are involved in related research and development, which lead to technological as well as transplantation procedure advancements.

The North American transplantation market share was approximately 40% in 2021, with the U.S. leading the region, as it has a large patient pool for organ transplantation, especially for the kidneys, pancreas, liver, intestines, heart, and lungs. Moreover, research and development in the domain have been providing a boost to the success rate of such activities. For instance, in February 2022, Carnegie Mellon University's Department of Biomedical Engineering and Mayo Clinic signed a three-year research agreement to bioengineer innovative approaches to address the current barriers in organ transplantation.

Canada is also a significant contributor to the revenue of the North American market, owing to the high number of transplant patients in the country; however, the number of donor matches is low. To minimize this gap, the Government of Canada has announced an investment of $2 million for research on innovative tissue and organ donation projects. One such project involves the creation and testing of prototype technologies that employ artificial intelligence to better link organ donors with receivers. This project, being undertaken by BI Expertise of Quebec City and Ortho BioMed of Toronto, would receive $1 million from Health Canada in the next two years.

Europe holds the second-largest share owing to the substantial number of organ donors here. Germany, the U.K., and France contribute more than half the revenue to the industry in Europe. Individually, Germany dominates the market, and it is likely to witness the fastest growth in the future, owing to the technological advancements and research and development activities in the field of bionics.

The APAC region, led by China, Japan, and India, is the third-largest market, and it is expected to be the fastest-growing in the coming years, due to a surge in medical tourism activities and increase in the incidence of chronic diseases. China accounts for the largest share, and Japan is likely to have the fastest growth during the forecast period. The reason for such a significant growth in Japan is the innovative transplant techniques that help patients’ bodies accept the transplanted organ. For instance, Kyoto University Hospital has successfully conducted the world's firs living-donor lung transplant between people of incompatible blood types using lung parts from both the patient's both parents. 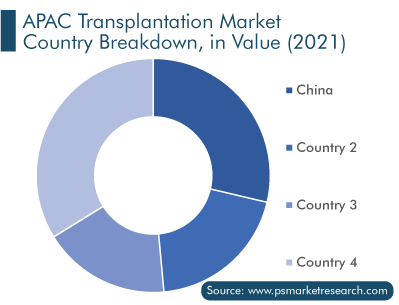 In recent years, major players in the market have been actively involved in mergers and acquisitions, along with product launches and geographical expansions. For instance, in September 2021, Sanofi acquired U.S.-based biotech company Kadmon for $1.9 billion, which helped the former company’s transplant business expand, with the addition of Rezurock to its transplant product portfolio.

Key Players in Transplantation Market Are:

Frequently Asked Questions About This Report
What is the value of the global transplantation market?+

What is the growth rate of the global transplantation industry?+

What are the biggest trends in the transplantation market?+

Technological advancements are trending in the market for transplantation.

What are the regional insights of the transplantation industry?+

North America is the largest region in the transplantation industry, followed by Europe; APAC will witness the fastest growth.

Who are the key end users in the transplantation market?+

As an end user, hospitals generate most of the revenue in the market for transplantation.