The global surgical sutures market was valued at $4.1 billion in 2021, and it is expected to reach $6.8 billion by 2030, growing at a significant CAGR of 5.9% between 2021 and 2030. The growth can be primarily attributed to the rising number of surgical procedures and the increasing prevalence of chronic diseases around the world.

Moreover, the growing aging population, the increasing number of hospitals, and the rising healthcare expenditure are some of the other key factors driving the growth of the market in the coming years. The market is also expanding as a result of the attractive reimbursement status for a variety of surgical procedures and the introduction of improved suture methods.

A substantial chance for a big number of individuals undergoing surgical operations is also presented by an increase in health insurance coverage, which subsequently covers healthcare attention in the form of surgical treatments. To ensure that their citizens have access to essential healthcare services, several governments in emerging economies are working to expand insurance coverage in their nations. 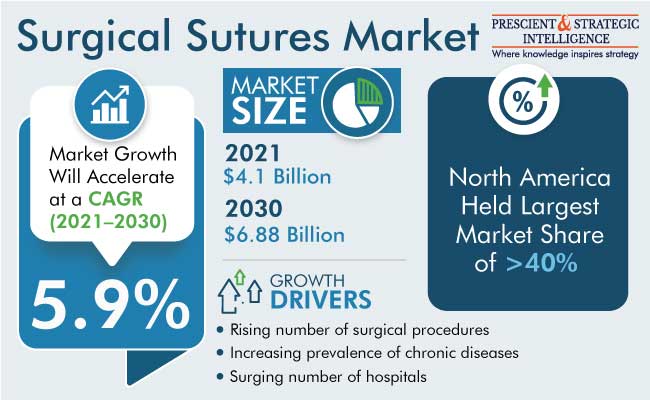 Absorbable sutures dominated the market, with a revenue share of more than 52%, in 2021, and the category is projected to sustain its dominance in the near future. This is majorly due to its timings, as it consumes less time and lowers the number of patient visits to hospitals. Internal surgeries frequently use absorbable sutures because they naturally and safely disintegrate in the body. Proteolytic, enzymatic, and hydrolytic mechanisms are used to degrade these sutures. Depending on the material utilized for the procedure, the breakdown process typically takes ten days to eight weeks. Different materials, including catgut, polyglycolic acid, polydioxanone, and polylactic acid, are used to make absorbable sutures.

The multifilament category accounted for the largest market share, of more than 60%, in 2021. This is attributed to the rising number of complex surgeries, the growing geriatric population, and favorable reimbursement policies for hospital treatments. Multifilament sutures include numerous threads of material braided together, and they have a covering of various substances, including silicon and wax. They provoke an inflammatory response yet require fewer knots to keep the knot in place. Materials including PGA sutures and polyester sutures are frequently used to make multifilament sutures. These are mostly employed in orthopedic procedures and other procedures. 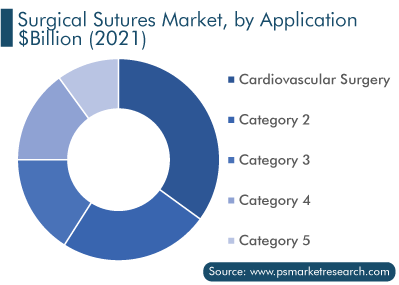 Globally, North America accounted for the highest revenue share, more than 40.0%, in 2021. This is mainly driven by the increasing aging population, the rising number of road accidents, the surging cases of diabetes and obesity, and the increasing burn cases in the region. Moreover, the increased need for advanced surgical methods and products, such as biocompatible surgical sutures with antimicrobial coatings, is driving the growth of the market in North America.

Since North America is renowned for its healthcare systems and facilities, the continent is quickly embracing technologically advanced surgical sutures. The aging of the baby boomer population, the rise in demand for surgical operations, and the increase in government healthcare spending are other factors contributing to the regional market's progress. Additionally, large investments in healthcare R&D in the U.S. and Canada are expected to fuel market growth over the next few years.

The European market held a significant revenue share in 2021, and it is projected to grow at a substantial CAGR, during the forecast period. The growing incidence of chronic illnesses and the aging population are driving the growth of the market in the region. New opportunities are likely to emerge in the coming years, as a result of continuous research and development and product launches in the regional market.

Europe is famous across the world for its top-notch medical services and healthcare facilities, and it is home to several medical device companies that are pioneers in the field of surgical sutures. Among many companies in the area that deal with sutures are Johnson & Johnson, Medtronic, and B. Braun Melsungen AG. The need is also rising in new surgical specialties, including urological, colorectal, gynecological, and cardiovascular surgery, thereby fueling the growth of the market over the coming years. 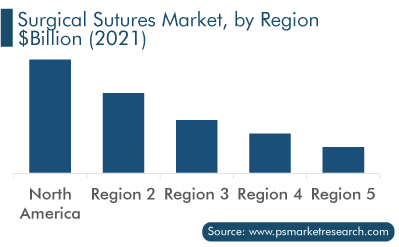 Also, elderly people are prone to musculoskeletal injuries and chronic diseases; therefore, they require higher surgical intervention as compared to younger people. Therefore, the aging population drives the product demand in the market, globally. For instance, as per the United Nations Department of Economic and Social Affairs (UNDESA) report, the number of people aged 60 years or over is projected to grow by 56%, globally, i.e., from 901 million in 2015 to 1.4 billion by 2030. Also, by 2050, the global aging population is projected to reach nearly 2.1 billion.

Moreover, according to the Centers for Disease Control and Prevention (CDC), in the U.S., every year one out of three adults aged 65 years or older falls and incur injuries such as head traumas and hip fractures. Also, two-thirds of all cases of colorectal cancer reported were in people aged 65 years or older in 2013. In addition, older people are more prone to different diseases, which further require surgical intervention, hence acting as a major driver for the growth of the surgical sutures market.

Increase in Number of Surgeries and Burn Cases Around the World

With the prevalence of different kinds of diseases and health problems, the number of surgeries performed is also significantly increasing, globally. The rising number of burn cases is also associated with the increase in the standard of living. The increasing standard of living leads to the rise in the use of electric appliances, and indoor chimneys and fireplaces. The majority of deaths in burn cases happen due to complications after the surgery such as shock, organ failure, respiratory problems, or infection. Sutures are also used in burn cases during plastic surgeries and surgeries of burned body parts.

Top Players in the Surgical Sutures Market Are:

Frequently Asked Questions About This Report
What was the size of the surgical sutures market in 2021?+

What will be the growth rate of the surgical sutures market during the forecast period?+

Which is the largest application area in the surgical sutures market?+

Cardiovascular Surgery is the largest application area in the surgical sutures market.

What are the major drivers for the surgical sutures market?+

The major drivers of the surgical sutures market include the rising number of surgical procedures, the increasing prevalence of chronic diseases, the surging number of hospitals, the growing aging population, and the rising healthcare expenditure.