The global surgical retractors market size was valued at $1,719.2 million in 2021, and it will grow at a CAGR of 6.7% during 2021–2030, to reach $3,088.8 million by 2030. This is majorly on account of the rising cases of chronic diseases, growing geriatric population, and surging preference toward minimally invasive surgeries, across the world.

Globally, APAC is the fastest-growing market, owing to the presence of the most populous countries in the region, which results in a large number of performed surgeries. Surgical retractors are basically used in neuro, wound closure, reconstructive, cardiovascular, and other surgeries. For instance, heart and lung conditions are among the leading health issues in India, causing millions of deaths each year. The nation anticipates a high demand for surgical procedures that can treat various ailments. Thus, it is expected that the demand for surgical retractors in the country will increase at a high rate because of the surging need for surgical treatments. 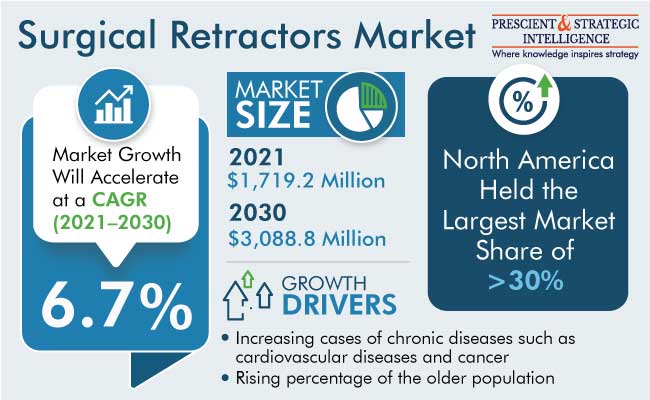 Self-Retaining Category To Grow at the Highest CAGR

With the rise in preference for minimally invasive surgeries, the demand for self-retaining retractors is increasing. Also, these retractors ensure hygiene and cleanliness during operations and are used to perform complex surgeries, such as spinal tumor surgeries. By using self-retaining retractors, surgeons can perform operations efficiently and retain tissues without the use of hands, and can avoid pressure on the spinal cord. Thus, the category is expected to record the fastest growth, advancing at a CAGR of 7.1%, during the forecast period.

North America accounted for the largest share, of around 30%, in the surgical retractors market in 2021. This is attributed to the higher prevalence of chronic diseases with the fast-paced lifestyles, rise in the geriatric population, and technological advancements in the healthcare sector, in the region.

Additionally, the need for home healthcare services is increasing for the growing older population in the U.S. According to official statistics, there are more than 55 million persons in the country who are 65 years or older, and by 2060, this figure will rise to 90 million. As a result, the American government is spending huge money on the health of elderly people. For instance, in March 2021, the government suggested the spending of $400 billion over eight years on community and home services.

Moreover, Canada is also focusing on the development of healthcare infrastructure in order to cater to expanding healthcare needs. The majority of surgeries conducted in Canada include cesarean-section deliveries and hip and knee replacement surgeries, among others, which require a large number of surgical retractors. Moreover, over the years, a number of significant market participants have increased their focus on rolling out new versions and improving their product line in order to enhance their position in the market. Thus, these factors drive the regional market growth.

Europe is the second-largest market for surgical retractors, owing to the rise in investments by leading players in the industry, increase in the number of surgeries, and several measures adopted by governments to enhance healthcare quality, in the region. In addition, Germany is the major contributor to the regional market. This is ascribed to the rise in the need for biopsies for the diagnosis of cancer, the presence of a large number of market participants, and the widespread use of cutting-edge technologies, in the country. For instance, in Germany, the number of new cancers diagnosed in 2020 was 600,000.

Furthermore, France is the second-largest shareholder in the European market. This is attributed to the rising number of cases of chronic diseases, such as heart attacks and strokes, every year, in the country. Surgical procedures are becoming more popular with the rise in such cases, and hence the requirement for surgical retractors is increasing. 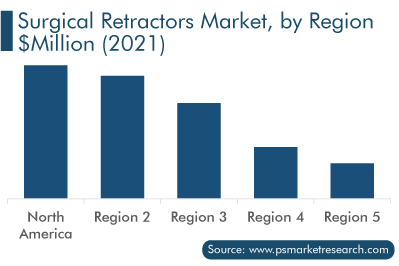 The orthopedic retractor category will witness the fastest growth during the forecast period. This can be ascribed to the increasing number of orthopedic surgeries, including ankle fractures, knee replacement surgeries, and arthritis-related problems, which are common conditions in the older population. The affordability and accessibility of surgical treatments have improved over time, which has resulted in a large number of surgical procedures involving orthopedic surgical retractors. Moreover, the demand for cutting-edge surgical equipment, such as surgical retractors, has increased as a result of the high incidence of MSK ailments in muscles, nerves, tendons, joints, cartilage, and spinal discs. 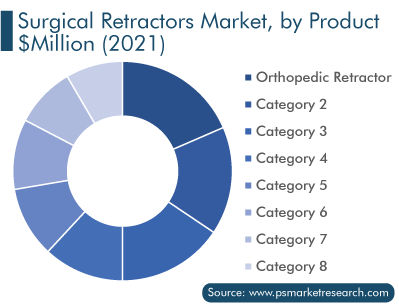 Obstetrics focuses on childbirth and pregnancy, while gynecology is a larger field that covers all conditions affecting the female reproductive systems. Cervical cerclage and episiotomy are two common surgical operations covering reproductive organs. The minimally invasive gynecology surgeries result in shorter hospital stays and can help in reducing postoperative discomfort after operations. Surgical instruments such as retractors, laparoscopes, and hysteroscopes are used during these operations. In addition, more cesarean operations are expected to lead to the rise in the use of obstetrics and gynecology retractors. Thus, this category held a market share of around 24% in 2021.

Surgical retractors are widely used in hospitals. The category generates the most income in the market, with a revenue of $855.6 million in 2021. This is majorly on account of the high volume of patients and preventive procedures carried out in these healthcare facilities. As per the data, the U.S. recorded 130 million visits to the emergency department. The need for surgical equipment in hospitals has grown dramatically, as a result of an increase in surgical operations like angioplasty and kidney and liver transplants as well as a surge in trauma cases. Non-communicable diseases like cancer, diabetes, and cardiovascular diseases are becoming more prevalent, owing to the aging population, bad lifestyle choices, and high smoking and alcohol usage. These factors are driving the surgical retractors market growth in this category.

The demand for surgical retractors is increasing in ambulatory surgical centers (ACSs). This is due to the better patient accessibility and lower out-of-pocket expenses on healthcare. The development of ASCs has been primarily driven by the rise in patient choice for having tests performed in affordable medical settings. Also, low-cost treatment facilitates larger sections of the population to have access to medical services.

The market is fragmented with the presence of many players. In recent years, they have been involved in partnerships, acquisitions, and product innovations, in order to stay ahead of their competitors.

Frequently Asked Questions About This Report
What was the size of the surgical retractors market in 2021?+

What will be the growth rate of the surgical retractors market during the forecast period?+

Which is the largest application area in the surgical retractors market?+

Obstetrics/Gynecology Surgery is the largest application area in the surgical retractors market.

What are the major drivers for the surgical retractors market?+

The major drivers of the surgical retractors market include the increasing cases of chronic diseases such as cardiovascular diseases and cancer, and the rising percentage of the older population.