The global sports food market generated revenue worth $4,176.5 million in 2015 and is expected to register a CAGR of 9.2% during the forecast period (2016–2022). The market is mainly driven by the growing number of health clubs and fitness centers along with the shift in consumer preference toward organic sports food.

Based on type, the sports food market is categorized into energy bars, protein bars, and sports gels. Among these, the energy bars category contributed the highest revenue to the market in 2015. This is attributed to the rising consumption of energy bars in the North American and European regions. The market in these regions has been evolving due to the increasing number of health clubs. It has been witnessed that the number of health club members in Europe grew from 45.4 million in 2012 to 49.2 million in 2013. 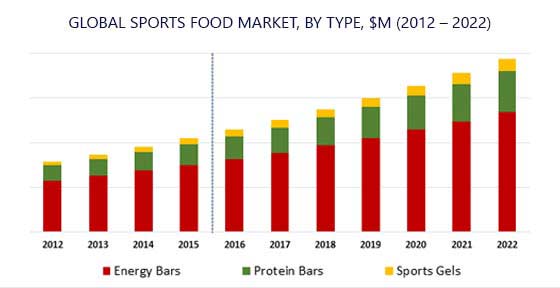 On the basis of distribution channel, the sports food market is classified into supermarkets & hypermarkets, convenience stores, drug stores, and others. Among these, the supermarkets & hypermarkets classification held the largest share in 2015. The major driver for the growing revenue of sports food products through this distribution channel is the increasing penetration of such large retail stores, which is bringing such products within easy reach of consumers.

Geographically, the North American region contributed the highest revenue to the sports food market in 2015. Within the region, U.S. consumers are increasingly switching to food products with high nutritional value and are also willing to pay more for them. Consumers who exercise at least twice a week are likely to consume energy bars. The busy lifestyle of U.S. consumers also promotes the consumption of energy and protein bars, as they have less time to cook nutritious food after a workout session. The major consumers of protein bars in the country are in the age group 18–24, as they are the ones most engaged in athletic activities.

The key trend being observed in the sports food market is a shift in consumers’ taste from cereal and snack bars to energy and protein bars. Earlier, sports foods were mostly consumed by athletes and bodybuilders; however, nowadays the non-athlete consumer group, especially younger people, is also consuming them, owing to the healthier profile of sports foods as compared to snack bars. The demand for bars with organic ingredients has grown significantly, especially in developing countries, such as China, India, and Brazil. In order to help consumers fight and prevent celiac disease, manufacturers in countries such as the U.S., Canada, France, Italy, and Russia are choosing ingredients such as quinoa, sunflower seeds, pea and rice protein, brown rice flour, cacao nibs, organic agave, and tapioca syrup.