Geographically, the Asia-Pacific (APAC) region accounted for the largest market share, in terms of volume and value, in 2017, and it is expected to witness the fastest growth in the coming years. APAC is the leading producer and consumer of spices and seasonings in the world. In addition to South Asian countries, the consumption and production of spices are also increasing in the Far East. 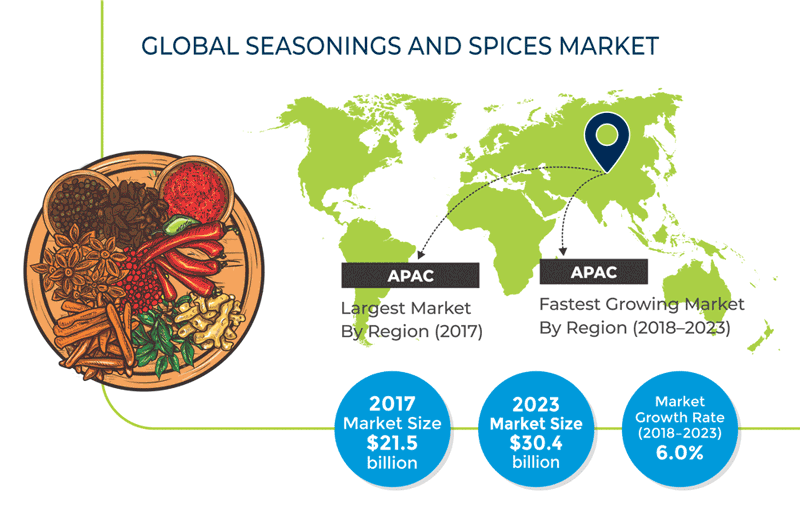 The changing consumer eating habits, on account of their surging income, are a key trend in the seasonings and spices industry. People across the world are trying new and expensive dishes to discover new flavors and tastes. Continental, Mexican, and Chinese cuisines are gaining a wide popularity, as people continue to experiment with new cuisines.

For example, during 2009–10 and 2011–12, the share of spices and salts in the total consumer spending in rural India remained at 2.4%, whereas the share in urban India jumped from 1.5% to 1.7%. The residential sector is becoming a significant end user in the seasonings and spices market due to the easy availability of recipes and easy access to the knowledge on ingredients via the internet and cooking-based shows on television.

Moreover, the busy lifestyle, long working hours, and large number of people living alone have fueled the demand for food service outlets that can offer quick delivery. The easy access to convenience food helps in saving the effort and time consumed while cooking at home. Apart from this, there has been a considerable rise in the consumer spending on ready-to-eat foods, ready-to-fry foods, confectionery products, and baked goods, especially in developed countries. Due to this reason, industries related to confectionery and processed foods are increasingly purchasing spices and seasonings.

The changing demographic composition has created a great opportunity for the players operating in the food industry to offer a wide range of ethnic flavors to customers demanding variations. Ginger, anise, and pepper are being used by food vendors and restaurants to enhance the flavor of Chinese food, whereas chili, cardamom, and curry are required to add flavor to Indian dishes.

Food outlets are also procuring cloves, nutmeg, cinnamon, and cassia to enhance the flavor of Thai food. Thus, the changing demographic composition is also providing lucrative investment opportunities to seasonings and spices market players across the world. In recent years, people have started traveling to exotic locations, owing to the expanding multicultural inhabitant base around the globe, to explore regional cuisines. 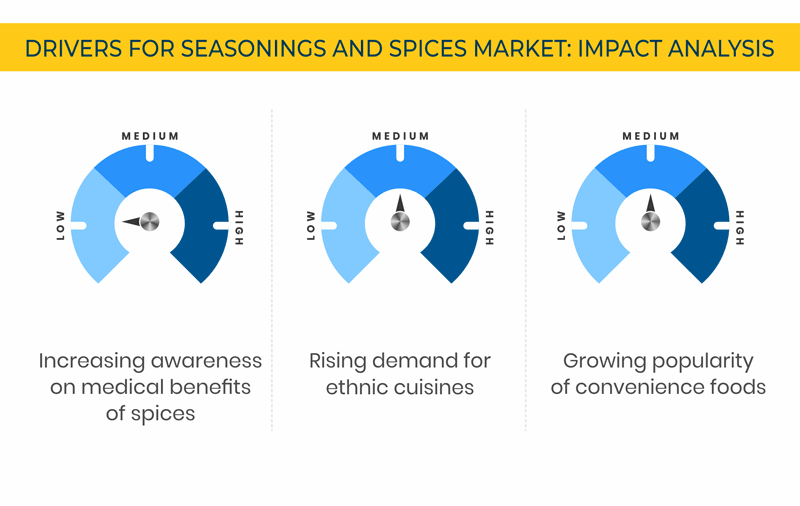 In 2017, the whole category held the larger share in the market for seasonings and spices, in terms of value and volume, under the product segment. Large quantities of whole seasonings and spices are being consumed by the industrial, food service, and retail sectors, as well as individuals.

The industrial category, under the end use segment, held the major share in 2017 due to the surging use of such flavoring substances in the food processing sector to meet the rising demand for hot and spicy food.

Geographically, the APAC region held the largest value and volume shares in 2017, and it is expected to demonstrate the fastest growth in the foreseeable future. This will be because of the rise in the production of such products in regional countries, supportive government policies, and favorable climatic conditions for spice plantation.

For instance, the Vietnamese Ministry of Agriculture and Rural Development estimates that the annual pepper production in the country would increase by 30% from 2016. Additionally, the booming population, especially in China and India, gives a boost to the seasonings and spices market growth in the region. 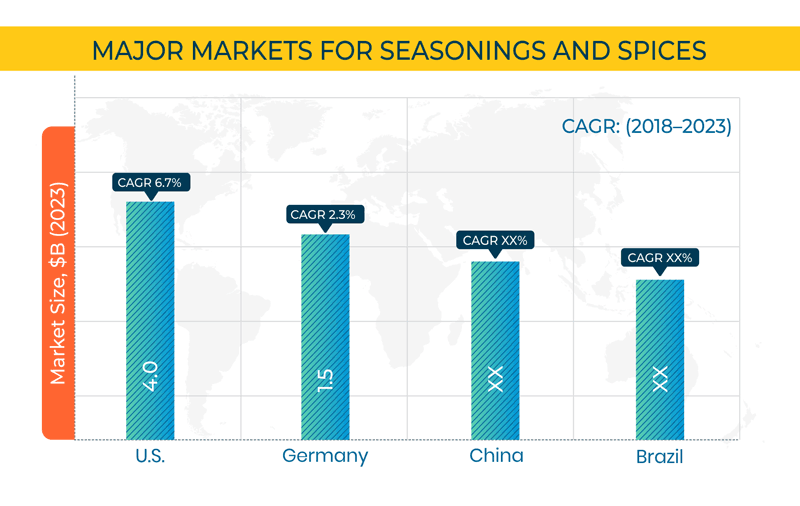 The key players operating in the market include Everest Spices, Mahashian Di Hatti Pvt. Ltd., DS Group, Fuchs Group, McCormick & Company Incorporated, Paras Spices Pvt. Ltd., Unilever Group, Ajinomoto Group, Sleaford Quality Foods Ltd., The British Pepper & Spice Company Limited, Brake Bros Ltd., Jamie Oliver Enterprises Limited, TRS Group, Camstar Herbs Ltd., Natco Foods Ltd. In recent years, major players in the global seasonings and spices market have taken several strategic measures, such as product launches and geographical and facility expansions, to improve their position in the industry. For instance, in 2016, Ajinomoto Co. (Thailand) Ltd., a subsidiary of Ajinomoto Co. Inc., invested around $22.1 million to increase the production capacity of rosdee, a flavored seasoning, at its factory in the Saraburi province of Thailand. This investment was part of the business strategy of the company to augment its revenue by fulfilling the increasing demand for the seasoning in Thailand.

In August 2017, Sleaford Quality Foods Ltd. launched eight new herbs and spices under its Chef William pot range. It included yellow mustard seeds, celery seeds, onion powder, and juniper berries. The company is focusing on product launches to increase its penetration in the food industry by expanding its product portfolio.

The Seasonings and Spices Market report offers comprehensive market segmentation analysis along with market estimation for the period 2013–2023.