The global sepsis diagnostics market size stood at $548.2 million in 2022, which is expected to reach $1,109.0 million by 2030, advancing at a CAGR of 9.2% during 2022–2030. This will prominently be due to the promulgating cases of hospital-acquired infections (HAIs) and sepsis and the several initiatives taken by healthcare as well as government bodies to support the research activities related to its diagnosis.

All hospitalized patients are vulnerable to a nosocomial infection. The major risk factors for these infections include the use of indwelling catheters, long hospital stays, overuse of antibiotics, and failure of the healthcare staff to wash their hands. Additionally, HAIs kill more people each year globally than car accidents, breast cancer, or AIDS. Thus, there is an utmost necessity to control HAIs.

The active participation of various government as well as non-government organizations to increase awareness regarding sepsis and its diagnosis all over the world is also fueling the market growth. For instance, in January 2021, Sepsis Alliance, which is a major sepsis organization in the U.S., announced the launch of a National Sepsis Registry Initiative (NSRI) to assist researchers, patients, and healthcare professionals in the improvement of sepsis diagnosis, treatment, and survival rate.

Moreover, the incorporation of nanotechnology has shown promising results to overcome the challenges faced during sepsis diagnosis. For instance, as per a study conducted by BioMed Central Ltd. in 2021, nanotechnology-based biosensors provide a novel approach to the diagnosis of sepsis via the detection of interleukin-6 (IL-6), procalcitonin (PCT), and C-reactive protein (CRP) levels, with an improvement in the sensitivity of biomarkers and a reduced processing time. 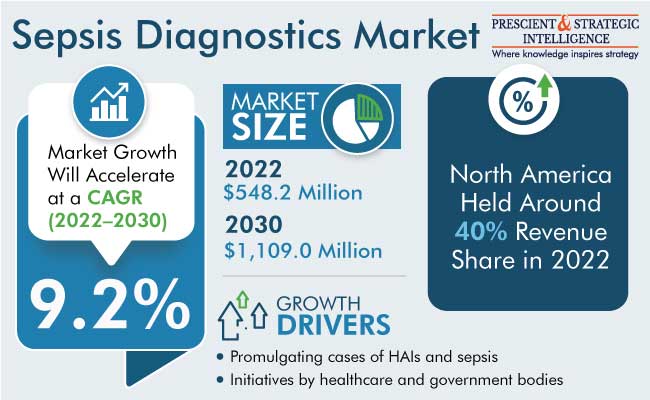 Moreover, due to the rising awareness of cleanliness in the midst of COVID-19, the demand for personal hygiene and environmental awareness is projected to surge even more in the coming period. The pandemic has made consumers more aware of the need to maintain hygiene at a personal level as well as in public places, to reduce the chances of infection, which is expected to become a trend in the long run.

The rate of HAIs significantly increased during the pandemic with the rise in nursing hours. During the period, medical device-related infections, including catheter-associated urinary tract infections (CAUTIs) and central line-associated bloodstream infections (CLABSIs) also increased, thereby intensifying the demand for sepsis diagnostics in hospitals. In addition, the lack of HAI control measures has impacted the sepsis diagnostics market growth positively during the pandemic.

The microbiology category accounted for the largest revenue share, around 50%, in 2022. Through the use of culture media testing, such as mycobacteriology tests, bacteriology tests, and serology tests, microbiology allows for the quantitative identification of microorganisms causing sepsis. The factors driving the category growth are the rising investments in clinical laboratories, increasing awareness amongst scientists and researchers regarding microbiological testing, and spur in the cases of infectious diseases. In September 2021, the combined microbiology departments at the Eastern Pathology Alliance launched on-site blood culture machines across Norfolk's three acute-care hospitals, to diagnose sepsis more quickly.

Additionally, considering the global burden of this condition, hospitals and MedTech companies are actively conducting trials of products that help in its detection. For instance, in August 2021, Presymptom Health received grants from the UK Innovation and Science Seed Fund to conduct clinical trials for microbiological diagnosis in hospitals.

However, molecular diagnostics is expected to experience the highest CAGR in the sepsis diagnostics market, of around 10%, during 2022–2030. This will be on account of the mounting interest in diagnostic test development and rising demand for point-of-care diagnosis. The detection of the pathogen responsible for sepsis is necessary for the selection of the antibiotic therapy, which makes molecular diagnostics an attractive strategy. The product launches by key players are contributing to the high-paced growth of the category. 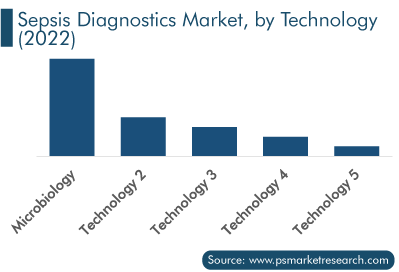 The blood culture media category accounted for the largest revenue share, over 40%, in 2022. This is because of the extensive utilization of the blood culture method in sepsis analysis due to its cost-effectiveness and usage convenience.

Automated Diagnostics Being Used Most for Diagnosis of Sepsis

Automated diagnostics was responsible for the largest share in 2022, ascribed to its better traceability, high efficiency, and elimination of repetitive diagnostic practices. In addition, the increase in the demand for the timely treatment of the condition and the implementation of various strategies by prominent players, such as widening their product portfolio, mergers and acquisitions, and partnerships are intensifying the category growth. For instance, in December 2020, Molzym, in collaboration with Fraunhofer IZI-BB, announced the launch of an automated analytical platform, called AutoSepT, which performs fast pathogen identification directly from specimen samples in less than 5 hours.

Furthermore, the advancements in medical technology also led to the fast category growth. According to a Europe PMC research study, by enabling the early detection of sepsis, the SERA algorithm provides healthcare professionals with the opportunity to commence treatment, thereby lowering the mortality rate.

The bacterial sepsis category dominated the market in 2022 with a nearly 80% share, and it is set to record the highest CAGR, over 8%, in the forecast period. This is due to the increase in bacterial sepsis incidence, spur in the prevalence of HAIs, and surge in the number of surgical procedures. As per a government organization, amongst all the pathogens, bacteria is the most-common cause of septicemia. And, the major reason for its high prevalence is HAIs, which led to a 15% increase in hospital-onset methicillin-resistant Staphylococcus aureus (MRSA)-associated bacterial sepsis incidence between 2019 and 2020 in the U.S.

North America Is Leader in Market

North America dominated the sepsis diagnostics market in 2022 with around 40% share. This is primarily ascribed to the high mortality rates associated with sepsis in the region. Recently, an American government organization stated that in an average year, 2 million Americans develop sepsis and 1 in 3 patients die in hospitals following onset. Moreover, the presence of a highly developed healthcare system is offering lucrative opportunities for the market growth. In addition, the high frequency of product innovations, coupled with the increment in R&D investments, is stimulating market growth in the region.

For instance, in April 2020, Cytovale Inc. announced the extension of its partnership with the Biomedical Advanced Research and Development Authority (BARDA) for examining the use of Cytovale’s rapid diagnostic system in sepsis patients, which accurately diagnoses the condition in less than 10 minutes. The cost of the research was around USD 6 million, out of which USD 3.83 million was contributed by BARDA.

However, APAC is set to register the highest CAGR, more than 10%, in the forecast period, due to the growth in the number of product approvals and increase in the R&D funding for advanced diagnostic solutions. In the APAC region, China and Japan together account for nearly 50% of the revenue, propelled by their rapid economic development. In addition, the rising mortality rate due to sepsis is a key factor responsible for the surging demand of sepsis diagnosis in these countries. China dominates the APAC market owing to the increasing number of hospitals, clinics, and diagnostic centers and the easy availability of advanced healthcare in the country.

Moreover, the development of POC and rapid diagnostic techniques and evolution of novel biomarkers for the early diagnosis of sepsis are expected to offer lucrative opportunities for the market growth in the region. 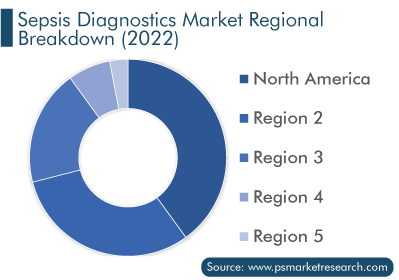 Frequently Asked Questions About This Report
What is the size of global sepsis diagnostics market?+

In 2022, the market for sepsis diagnostics solutions valued $548.2 million.

What are the drivers for the sepsis diagnostics industry?+

The sepsis diagnostics industry is driven by the rising infection prevalence and lack of hygiene compliance in medical settings.

North America is the largest market for sepsis diagnostics products.

What is the leading pathogen in the global sepsis diagnostics industry?+

Bacteria leads the pathogen segment of the sepsis diagnostics industry.

What is the future outlook of the sepsis diagnostics market?+