The Saudi Arabian HVAC TAB services market size was $45.0 million in 2021, and it is expected to reach $94.6 million in 2030, with a growth rate of 8.6% during 2021–2030. This is ascribed to the growing tourism sector, rapid HVAC installation, and surging development activities in the country's residential and industrial sectors. Moreover, the demand for these services is expected to rise significantly as a result of the robust growth in the commercial construction industry of the country.

In Saudi Arabia, the extreme climatic conditions, changing lifestyles, and an increasing number of government policies aimed at revamping the country's oil-dependent economy are also projected to increase the requirement for HVAC systems and TAB services. Moreover, the rising need for energy-efficient systems and the increasing integration of smart devices into them is projected to fuel the market advance. Additionally, the rising urbanization rate in the country drives the demand for TAB offerings. For instance, in 2021, around 84.5% of the kingdom’s population lived in urban areas, which has been leading to an increasing need for temperature-control systems as well as TAB services.

Furthermore, food loss and waste (FLW) have a significant economic, environmental, and social impact. It is a major worry for the country, as it imports the majority of its agricultural goods. Minimizing food loss requires the creation of suitable cold-chain storage and transportation facilities, for balanced distribution along the food supply chain. 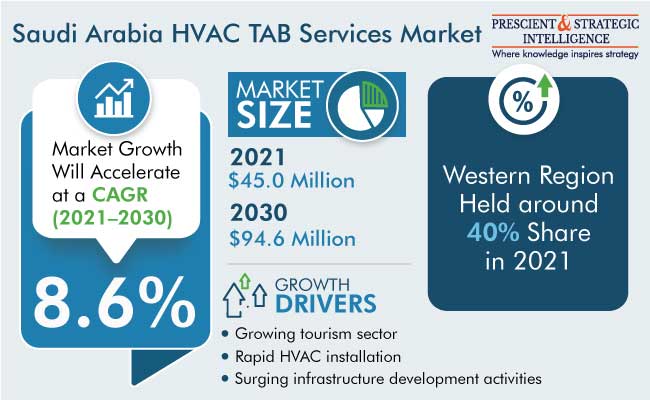 Moreover, initiatives and activities to change people’s attitudes toward lowering FLW, through the use of HVAC systems, as well as promoting sustainable and energy-efficient systems, are needed. As there is a soaring need to prevent food waste, the Saudi Arabian refrigeration industry is growing significantly. Major players are expanding their product portfolios by providing advanced refrigeration systems, thereby driving the demand for HVAC TAB services in the country.

The balancing service category accounted for the largest share, around 64.0%, in the Saudi Arabian HVAC TAB services market in 2021, and it is projected to maintain its dominance in the coming years. This is because air balancing is an important part of planning large commercial construction projects, but the same principles can easily be applied to individual homes or apartment complexes too. HVAC issues that may be identified through an air balancing inspection include damaged or perforated air ducts, loose duct joints, blockages, undersized ducts, excessively long ductwork, and ductwork with sharp turns. 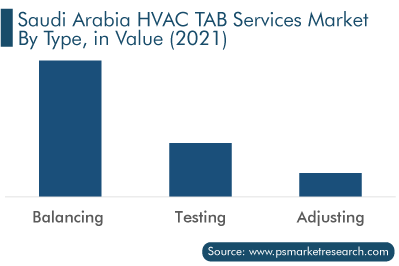 Among the end uses, the commercial industry held the largest revenue share, and it is set to register the highest growth rate over the forecast period. This is imputable to the rising number of commercial offices and buildings and the growing hospitality sector. Further, due to the sustained growth in foreign direct investment into Saudi Arabia, the rental values of Grade A office spaces in Riyadh and Jeddah have continued to rise. The Saudi Ministry of Investment granted 1,053 foreign investor licenses in the first half of 2021, an increase of 108% year on year, thus contributing to the increasing demand for office space.

Moreover, in December 2021, the country announced the completion of 16 new residential projects, worth $614 million, in major cities, including Jeddah, Al Khobar, and Al Ahsa, in addition to the capital, Riyadh. The projects cover a combined area of 638,000 square meters and comprises a variety of residential units, including villas, townhouses, and apartments. All this is expected to stimulate the demand for HVAC systems and their servicing in the coming years.

The rising spending on infrastructure and construction is supporting the growth of the Saudi Arabian HVAC TAB services market. The country has proposed a trillion-dollar pipeline of infrastructure projects aimed at diversifying the economy beyond oil and gas and positioning itself as a global hub for investment and logistics. Smart cities, tourism, and sustainable energy are just a few of the major areas where the growth strategy is focused on. For instance, in 2022, Saudi Arabia has invested over $10 billion to develop infrastructures in 11 cities. Additionally, around 90 million square meters will be allocated to develop accommodation for around 750,000 people.

In 2021, Western region accounted for the largest share, around 40%. The bright market outlook in this region can be attributed to the numerous major infrastructure development projects in cities such as Jeddah, Makkah, Madinah, and Neom. Some of the infrastructure projects are the $500.0-billion Neom city (Tabuk region), $8.0-billion Red Sea project, and $4.8-billion Jeddah downtown residential complex. These developments are being made against the backdrop of the Saudi Vision 2030, with which the government intends to diversify its economy, which is currently dependent on the oil and gas industry. In addition to this, the expanding travel & tourism sector is propelling the growth of the services.

Additionally, in January 2022, Saudi Crown Prince, Mohammed bin Salman and Chairman of the Public Investment Fund announced the launch of Boutique Group, a new hospitality brand that will manage and convert a collection of iconic historic and cultural palaces in the country into ultra-luxury boutique hotels. The first phase of the project will focus on the conversion of three historic palaces intro luxury hotels, in cooperation with the private sector, namely Al Hamra Palace, which will offer 77 keys, including 33 luxury palace suites and 44 luxury villas in Jeddah.

Further, the central region recorded the second-largest share in the market in 2021. With the rapid expansion/creation of tourist destinations, introduction of more entertainment businesses, and diversification of the hospitality sector, the region offers a vast potential for HVAC projects. Moreover, several projects have been launched in the previous years, which is expected to have a positive influence on the market growth in the long run. 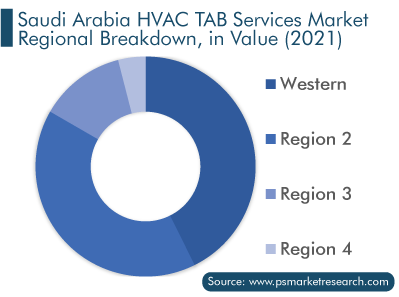 Frequently Asked Questions About This Report
What will be the 2030 value of the Saudi Arabian HVAC TAB services market?+

The value of the HVAC TAB services market in Saudi Arabia in 2030 will be $94.6 million.

Which is the most-popular service in the Saudi Arabian HVAC TAB services industry?+

Balancing services are preferred in the Saudi Arabian HVAC TAB services industry, with around 64% share.

Which will be the fastest-growing end use in the Saudi Arabian HVAC TAB services market?+

The commercial sector will have the highest CAGR, over 9%, in the HVAC TAB services market of Saudi Arabia.

Why is the Saudi Arabian HVAC TAB services market growing?+