The global satellite launch vehicle market was valued at $6,202.0 million in 2021, and it will advance with a CAGR of 3.6% during the forecast period, to reach $8,517.9 million by 2030. The increasing number of launches of satellites for communication purposes, weather forecasting, earth observation, and military purposes is fueling the market expansion. Moreover, the growing trend of reusable launch vehicles, for cutting costs and achieving reliable and on-demand space access, is boosting the growth of the satellite launch vehicle industry. 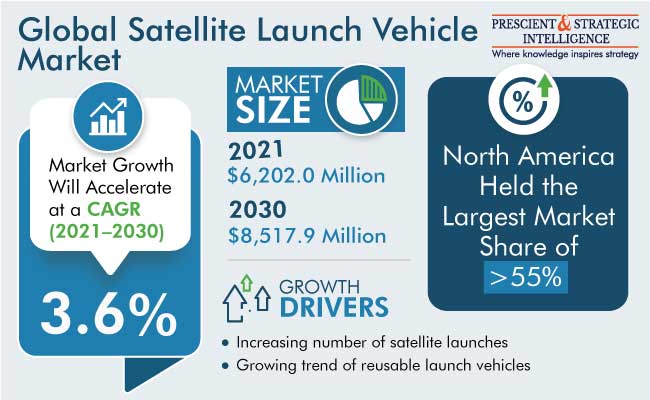 The implementation of AI and machine learning in the development of SLVs is a key market trend. AI improves mission efficiency by reducing downtime, itself by speeding up physical detection and diagnosis. In addition, AI can help in simplifying the assembly and testing of these vehicles, to further save cost and time and optimize the manufacturing process.

Furthermore, SLVs’ communication and navigation systems can be assisted by AI to help astronomers. Other trends, including the development of small launch vehicles to carry small satellites, thus saving operational cost and investments in hardware development, are supporting the market growth.

The market is dominated by the LEO category, generated over 90% revenue share in 2021. Satellites operating in LEO offer faster communications and low-latency networking and are easy to set up, thus ideal for deployment. Moreover, huge investments by government and private organizations are being made to deploy satellites in LEO. For instance, Space Exploration Technologies Corp. is developing the “Starlink” satellite internet constellation in the low earth orbit. Further, according to a private organization, there are about 3,700 satellites in LEO.

Furthermore, the GEO category is set to follow LEO, as satellites made for the geostationary orbit offer superior telecommunication and observation functionalities. According to the same source, there are about 560 GEO satellites orbiting the earth. 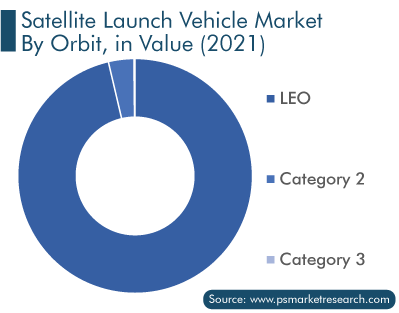 The global 5G satellite communication market revenue stood at $2,548.2 million in 2021, expanding with a robust CAGR of 33.3% during 2021–2030, to achieve $33,896.7 million by 2030. Technological advancements and the surge in the need for high-speed connectivity with low latency drive the demand for 5G communications via satellites.

5G networks are playing a critical role in assisting governments and policymakers in creating smart cities, thereby allowing inhabitants to participate and realize the socioeconomic benefits provided by an advanced, digital, data-intensive economy. With such developments, the demand for SLVs is predicted to expand in the coming years.

In addition, the increasing defense expenses by developing countries, such as India, China, and South Korea, for advancing the defense communication technology, is the major growth driver for the industry growth.

Moreover, with the increasing number of internet users all over the world, a huge amount of data is being generated, which further makes the satellite spectrum highly crowded and congested. This drives the demand for satellites, further fueling the market growth.

Communication applications held the major revenue share, contributing around $4.3 billion in 2021. This is primarily due to the increasing need for 5G and satellite connections in several commercial fields, such as logistics and shipping, automobiles, and civilian aircraft. Moreover, the increase in internet users and volume of data, together with the increasing demand for low-latency transmission, are driving the market category.

North America leads the satellite launch vehicle market, with a revenue share of around 55% in 2021, which can be attributed to the growing commercial launch activity in the region. Furthermore, the presence of major market players is contributing to the region’s dominance. Additionally, the continent’s advanced technologies and availability of a large pool of technically skilled workers are fueling the region’s market progress.

In addition, APAC is expected to grow the fastest in the industry, with a CAGR of over 4%, during the forecast period. This can be attributed to the growing satellite launches in the region for communication and space exploration purposes. Furthermore, the increasing government investment and participation of private players in the industry, to develop the 5G network, has significantly boosted the market. 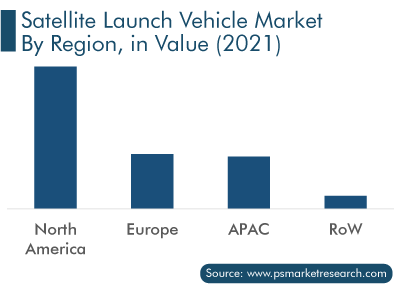 In recent years, players operating in the satellite launch vehicle market have been involved in several strategic and technological developments in order to achieve industry dominance. Some of the strategic measures taken by the players are product development and innovation, partnerships and collaborations, and business expansions and investments. For instance:

In December 2021, Mitsubishi Heavy Industries Ltd. announced the successful launch of Inmarsat-6 series (I-6 F1) by MHI’s H-IIA launch vehicle No. 45 (H-IIA F45). The launch vehicle, in partnership with Inmarsat Global Limited, was for their mesh network “ORCHESTRA”.

Based on Launch Activity

Frequently Asked Questions About This Report
What will be the revenue of the satellite launch vehicle market by 2030?+

In 2030, the market for satellite launch vehicles will value $XX million.

What is the forecast period of the satellite launch vehicle industry report?+

What are the types of vehicles used for satellite launching?+

Different space agencies classify their satellite launch vehicles differently, often depending on the orbit they are designed for.

Which is the preferred orbit in the satellite launch vehicle market?+

Low earth orbit is preferred in the market for satellite launch vehicles.

What is the most-lucrative region in the satellite launch vehicle industry?+

APAC is the most lucrative for players in the satellite launch vehicle industry.