The global rare earth metals market generated $7,063.8 million revenue in 2021 and it is expected to reach $15,473.0 million by 2030, progressing with a CAGR of 9.1% during 2021–2030. This will primarily be due to the increasing usage of these elements in the consumer electronics, aerospace, and automobile industries. 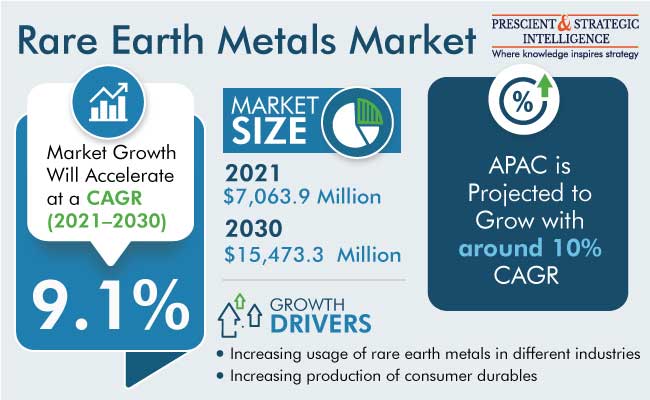 Major Opportunities in the Market

The rare earth metals market growth is credited to the increasing usage of neodymium magnets in MRI machines, to obtain internal views of the human body without radiation. This is driven by the heavy investment in the healthcare sector by government and top players globally. As per recent statistics, global healthcare investment stood at approximately $6 billion in 2021.

Moreover, the various applications of these metals in defense equipment, including communication equipment, night-vision goggles, precision-guided weapons, and stealth technology, are driving the demand for them. Neodymium and samarium are used to create resilient magnets that can bear high temperatures, thus making them perfect for mission-critical electronic and defense applications. In 2020, defense spending accounted for around 2.4% of the global GDP, thus reflecting a high demand for various military equipment.

Further, the increasing production of consumer durables in developing countries will drive the demand for rare earth elements. For instance, in India, HP has started producing laptops in support of the Make in India initiative of the government. The company has a planned vision for expanding its product portfolio in India, which will further boost the electronics industry, since HP has a market share of over 35% in the country.

Due to COVID-19, mining activities were also reduced. As per statistics, the metal and mining industry of North America recorded a significant productivity decline of around 6.7% in 2020. However, the rare earth metals market is expected to recover with the predicted increase in the usage of these minerals across various industries in the coming years.

The APAC market is projected to observe the highest growth rate, over 9%, during the forecast period. China being home to the largest reserves of the major rare earth elements is their largest producer, accounting for over 60% of the world’s output. Moreover, the country is a major exporter of these elements. With the rise in the production of automobiles and expansion of the construction sector, the rare earth metals market continues to grow. These minerals are used as alloys for the manufacturing of automobiles and their components.

Furthermore, the country has the largest base for electronics production. These metals are used in smartphones, TVs, and various energy-efficient devices. More than half the world's mobile phones, nearly all printed circuit boards, and two-fifths of the semiconductors are currently made in China. It has more than half the world's electronics manufacturing capacity. With the growing disposable income of the middle-class population, the demand for consumer electronics is rising across APAC.

Europe is expected to witness the second-fastest growth after APAC during the forecast period. This is majorly because European countries account significant shares of the global rare earth metal imports.

Neodymium is projected to garner the fastest growth, at a CAGR of around 10%, during the forecast period. This will mainly be because of the growing usage of neodymium magnets in vehicles, aircraft, and consumer electronics, such as mobile phones, audio systems, and TVs in rare earth metals market.

Moreover, neodymium is a high-strength metal that helps in reducing the size of electric motors for EVs. As per data, the global electric motor market recorded revenue of over $100 billion in 2020, which creates a high demand for this mineral.

Neo magnets are also used in wind turbines for electricity generation. As a result, they find wide application in China, due to the growing shift toward renewable sources. In the same vein, the U.S. and European countries are augmenting their adoption of the neo magnet technology for power generation.

Moreover, with technological advancements, other rare earth elements, including praseodymium, terbium, and dysprosium, are being increasingly used in wind turbines and for e-mobility.

Lanthanum will experience the second-fastest growth during the forecast period, as it has application in various consumer electronics and electrical appliances, such as TVs, energy-saving lamps, and fluorescent tubes. Moreover, it is used in the production of catalysts and acts as a polishing agent in various consumer products. Hence, the improving lifestyles of people around the world are propelling the demand for the metal.

Based on application, the magnets category held the largest share, over 30%, in 2021. This is ascribed to the high demand for rear earth minerals in consumer electronics, such as sensors, speakers, and headphones. Cerium and dysprosium are highly magnetic and increasingly being used in manufacturing computer disks, lasers, commercial lights, turbine generators, electric motors, and energy-efficient vehicles.

The catalysts category held the second-largest share in 2021. These products’ primary role in a catalyst is to absorb, store, and release oxygen, while also stabilizing the surroundings in which they function. Lanthanum and cerium are the rare earth metals that are commonly utilized in catalyst systems. They are also used in the illuminated screens on electronic devices, air pollution control systems, and during the e-polishing of optical glass. 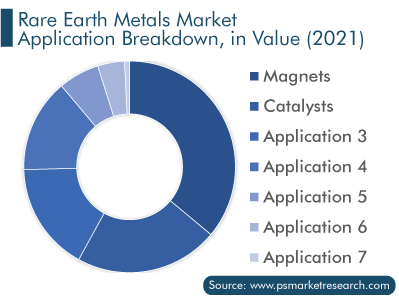 The report offers comprehensive market segmentation analysis along with the revenue estimation for the period 2017–2030.

Frequently Asked Questions About This Report
How big is the rare earth metals market?+

What country controls most of the worldwide rare earth metals industry?+

China is the largest country in the rare earth metals industry.

What was the value of the rare earth metals market in APAC in 2021?+

Which are the significant applications in the rare earth metals industry?+

Magnets and catalysts are the most-significant applications in the rare earth metals industry.

Why is rare earth metals market driven by the automotive industry?+

The market for rare earth metals is driven by their extensive usage in the manufacturing of the magnets of EV motors.